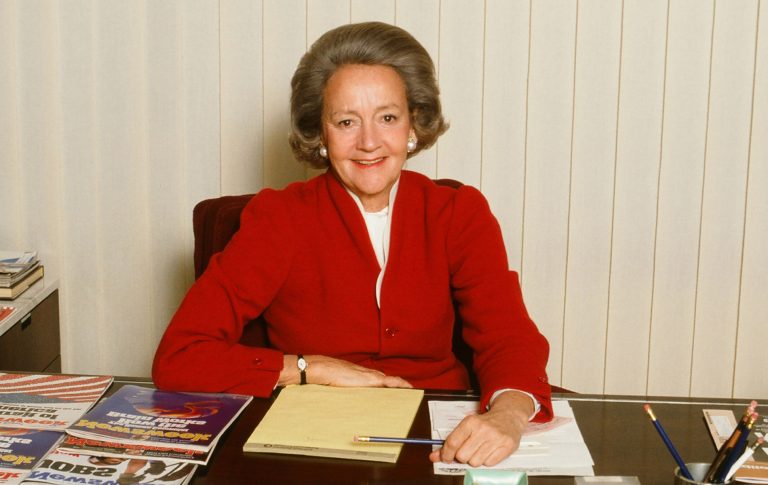 Steven Spielberg’s The Post takes an in-depth look at Katharine Graham, the first female publisher of a major American newspaper, who was at the helm ofThe Washington Post when the Pentagon Papers story was published. Ahead of the film’s Canada-wide release on Jan. 12, here are six essentials you should know about the trailblazing publisher.

Steven Spielberg directs Meryl Streep and Tom Hanks in The Post, a thrilling drama about the unlikely partnership between The Washington Post’s Katharine Graham (Streep), the first female publisher of a major American newspaper, and editor Ben Bradlee (Hanks), as they race to catch up with the New York Times to expose a massive cover-up of government secrets that spanned three decades and four U.S. Presidents.

The Post, directed by Steven Spielberg, covers the roughly two weeks in June, 1971 leading up to the historic Supreme Court ruling about whether the government had the right to restrict The Washington Post or the New York Times from publishing the story of the Pentagon Papers. The cinematic celebration of journalism and press freedom hinges on the decisions made by the newspaper’s publisher Katharine Graham, who deftly piloted The Washington Post Company through political scandal and investigative coups for more than 20 years.

Before seeing The Post as it opens wide across Canada this week, here are the essentials to know about the formidable Graham.

1. She is finally getting her due in a movie.

Graham was not only the first female publisher of a major American newspaper, she was also the first female head of a Fortune 500 company. The Post paints a compelling portrait of Graham during The Washington Post‘s involvement and eventual publishing of what became known as The Pentagon Papers, the first major scandal of the President Richard Nixon administration that set the wheels of history in motion.

How Graham rose to the occasion and gained confidence in spite of sexism and self-doubt that came with a man’s world during this crisis paved the way for how she would later trust executive editor Ben Bradlee and his team in the scandal that rocked a generation: the unusual break-in at Democratic National Committee headquarters in the Watergate Complex.

Graham would be the first to say (and did) that she maintained an arm’s length role in Watergate, but as the publisher who trusted her team she got short shrift in the 1976 movie All the President’s Men, which she allowed to film in the Post’s City Room. Robert Redford all but wrote Graham out of the story –  and she wasn’t happy about it. She’s mentioned only once, over the phone and using then Attorney General John Mitchell’s vulgar infamous threat: “Tell Katie Graham she’s gonna get her tit caught in a big wringer if that’s published.”

2. She wasn’t originally a feminist.

Although she became famous for her success in a man’s world, by her own admission Graham came to her understanding of the “seriousness and complexity of the issue” of women’s liberation late. She was initially put off by what she later understood was necessarily extreme feminist militancy “and disliked the kind of bra-burning symbolism,” she readily admits. “I was aware of the issues but had no clear idea how to lean on male-chauvinist managers to make changes,” she recalls, also in Personal History. But when Graham came around, it was mainly thanks to her friendship with Gloria Steinem. Graham acknowledged that she also had a responsibility for policing attitudes and practices, even correcting what she viewed as subtle examples of gender bias in the way the Post’s personnel director might introduce new people in internal memos. When Steinem launched Ms. magazine, Graham even put up US$20,000 of the seed money.

3. She won the Pulitzer Prize.

After graduating from the University of Chicago, Graham worked as a reporter in San Francisco before moving back to Washington and where she worked in the Post’s circulation and editorial departments. But her Pulitzer wasn’t for the newspaper’s legendary investigative work. It was for her own writing. Graham’s bestselling and frequently wrenching memoir Personal History was awarded the Pulitzer for Biography or Autobiography in 1998. She was 80. In its citation, the Pulitzer committee called it a “frank, honest and generous book,” and it is. A new audiobook edition was recently issued and should be your next big listen.

4. She never found out who “Deep Throat” was.

According to Graham’s memoir Personal History, even she didn’t know who Deep Throat was: Woodward, Bernstein and Bradlee never told her, and she never asked. To her credit as a publisher who believed in the source work of good journalists, even the publisher of The Washington Post went to her grave in 2001 without knowing the answer to one of Washington’s longtime mysteries. It would be several more years before the Post’s nicknamed insider informant went public, and “Deep Throat” admitted that he was Mark Felt, a former FBI agent who at the time of the Watergate break-in was the agency’s second in command. Felt revealed his identity in a 2005 Vanity Fair article and, incidentally, is the subject of a new biographical spy thriller.

When the movie The Post opens, it’s June of 1971, and Katharine Graham is publisher of The Washington Post. Today, Graham is famous as the astute steward of the media company (which remained in the family for 80 years before the Grahams sold it in 2013 to Amazon founder Jeff Bezos) who guided it through two major political scandals and the union workforce’s 1975 press strike. But none of it was part of her original career plan.

Sadly, although raised in extreme wealth and privilege, Graham grew up shy and with few guiding personal relationships. “I had to more or less bring myself up emotionally and figure out how to deal with whatever situations confronted me,” she admitted. She eventually served as primary publisher of The Post for more than 20 years.

Her wealthy father, Eugene Meyer, purchased the newspaper in a 1933 bankruptcy sale but when the time came, he handed the reins to Graham’s charismatic husband, Philip. While raising their four children, the business responsibility was thrust upon her in 1963 after the sudden death of her husband. After years of struggling with mental illness, Philip committed suicide with a shotgun at their country home (she was at home with him at the time and was the person who discovered his body).

In an unfortunate parallel, their son and heir, William Graham, died in December at his home in Los Angeles of a self-inflicted gunshot wound in an apparent suicide, much like his publisher father.

6. The well-connected Washington maven “had the greatest laugh.”

The end titles for The Post contain this simple credit: “For Nora Ephron.” What’s that connection? Both were, of course, legendarily gracious hostesses. That combined with longtime friendships with Adlai Stevenson, Thomas Mann and Robert McNamara made Graham an especially powerful figure at the intersection of Washington’s social and political life.

Although not one of his Fifth Avenue swans, she was even friends with Truman Capote. The writer made her guest of honour of his legendary 1966 Black & White Ball at New York’s Plaza hotel – although to hear Graham remember it, she ruefully admitted she was more of an excuse for him to throw a great party.

But the Graham/Nora Ephron connection has a few layers. Writer and filmmaker Ephron, for example, was the one who gave Graham’s memoir a rave review in the New York Times. She was also among the op-ed tributes in The Washington Post after Graham died in 2001 (“it was a deep, warm, throaty, fantastically engaging thing,” she writes of Graham’s laugh). Tom Hanks, who plays Post executive editor Ben Bradlee, and his wife, Rita Wilson, were also close friends of Ephron, who died of leukemia in 2012 at the age of 71. They, Streep and Spielberg were among those gathered at Lincoln Centre for Ephron’s 2012 memorial.

Hanks made his Broadway debut in 2013 by playing tabloid columnist Mike McAlary in Ephron’s final work Lucky Guy, which debuted a year after her death.

Arguably the best connection is around Ephron’s sharply comedic bestselling 1983 debut novel Heartburn (that she later adapted for the Mike Nichols movie starring Meryl Streep and Jack Nicholson), which concerns a woman’s marriage to a philandering Washington journalist. The autobiographical novel was inspired by the acrimonious disintegration and break-up of Ephron’s four-year marriage to Carl Bernstein, half of the Post‘s investigative journalism duo (Woodward and Bernstein) who broke Watergate.