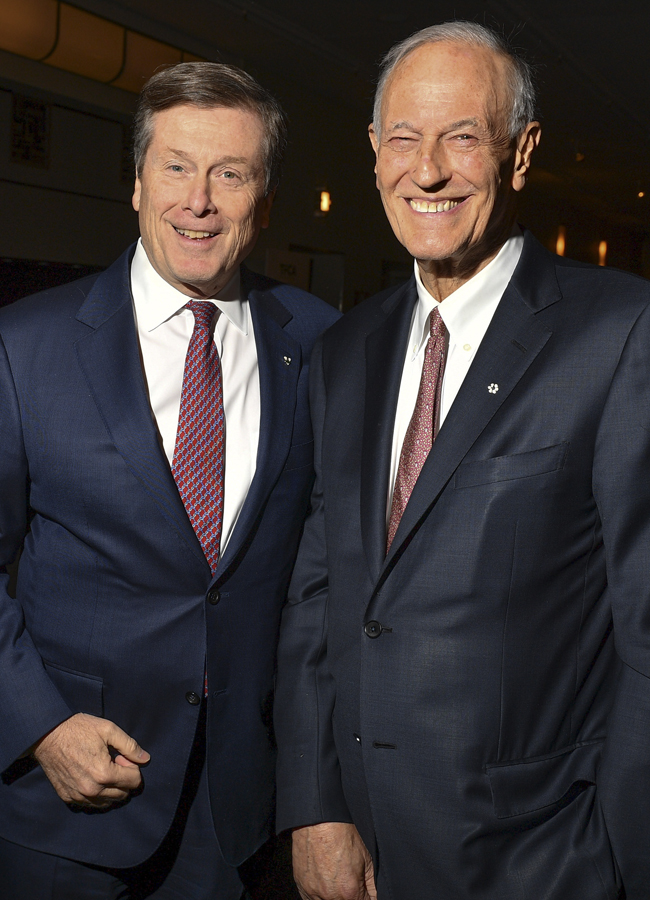 Awards season is in full swing in La La Land, but there’s no place like home, and Toronto cinephiles gathered at the Carlu in celebration of 21st Annual Toronto Film Critics Awards. The sold-out cocktail and dinner event was a rollicking mash-up of worlds as the critics, and the filmmakers and actors who love them, trod the red carpet with business and civic leaders as well as the socially great and good. Just check out Mayor John Tory and Rogers Vice Chairman Phil Lind above.

The evening started on a powerful note as the evening’s host, Toronto International Film Festival artistic director Cameron Bailey, addressed the issues of equal pay and sexual harassment and used the words of women in film to suggest how storytelling from new, different and underrepresented voices foster positive change beyond hash-tag activism.

To that end, diversity was seen in Greta Gerwig’s win as Best Director for Lady Bird (the Golden Globes had nominated no female in that category, but Gerwig secured an Oscar nomination, only the fifth woman to do so) while African-American filmmaker Jordan Peele won Best Screenplay for Get Out (he, too, is nominated for an Oscar for directing and screenwriting).

In other awards, indie darling The Florida Project took home Best Picture, with the film’s star Willem Dafoe snagging Best Supporting Actor. Dafoe has been picking up a slew of awards for his role as Bobby, the kind motel manager, including the National Society of Film Critics (USA), New York Film Critics Circle, National Board of Review (USA) and the Los Angeles Film Critics Association. Spot a pattern here?

Critical darlings Daniel Day-Lewis (Phantom Thread) and Frances McDormand (Three Billboards Outside Ebbing, Missouri) were awarded Best Actor and Actress respectively, with McDormand so far sweeping that category, winning the Golden Globe and SAG, could Oscar be next?

Hilarity ensued when iPhone acceptance speeches were read or screened from many of these stars as the “award was accepted on their behalf.” But in the room were a slew of young and diverse Canadian talent who collected a rich purse of awards including the $50,000 Technicolor Clyde Gilmour Award, the $5,000 Maison Birks Allan King Documentary Award and the $5,000 Stella Artois Jay Scott Prize for an emerging artist. Last year’s winner of that prize, Ashley McKenzie, won the country’s richest cultural prize, the $100,000 Rogers Best Canadian Film Award, which she received for her debut feature Werewolf, proving that the critics know how to pick ’em.

Guests went home with a copy of Our Words on Film, a compilation of articles from TFCA members that “captures the range of engaging, provocative writing that has been entertaining, and occasionally enraging, Toronto’s legendary film lovers for two decades.” Amanda Brugel from The Handmaid’s Tale Bria Vinaite of The Florida Project