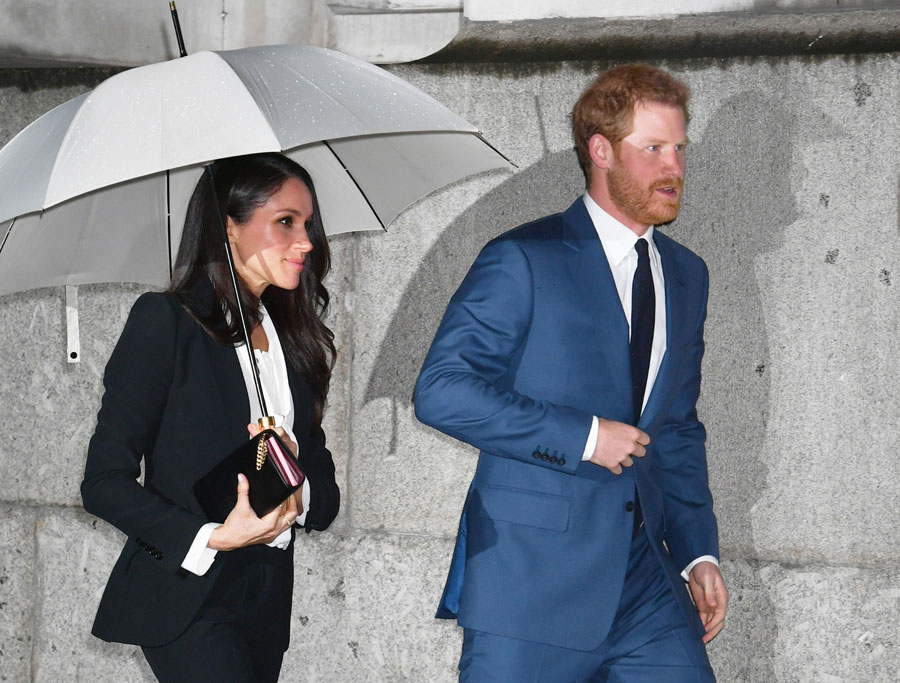 The former Suits star even wore a suit for the occasion as she and Prince Harry received a royal welcome at their first awards ceremony together in London this week.

Not even the lousy weather could rain on their parade as Prince Harry, 33, and his bride-to-be, Meghan Markle, 36, set out for a night on the town at their first awards ceremony together. Seriously, these two always look like they’re having the time of their lives when they’re together! (Not that we’re jealous or anything.)

On Feb. 1 (and with only four months to go before their highly-anticipated nutptials!) the dashing couple arrived hand-in-hand at the Endeavour Fund Awards ceremony at Goldsmith’s Hall in London to celebrate the sporting achievements of wounded, injured and sick servicemen and women.

The Fund, which is led by the Royal Foundation of the Duke and Duchess of Cambridge and Prince Harry, supports activities that contribute to the physical and psychological wellbeing of the country’s servicemen and women. During the ceremony, Meghan met with nominees, key supporters and participants alongside her royal fiancé.

Harry, who has supported military personnel since he left the army in 2015, beamed as he introduced Meghan to row after row of illustrious guests.

And I’ll bet you can’t find another event more fitting for Harry and Meghan to attend, given that his creation of the Invictus Games, a sporting event for wounded veterans, were last held in September 2017 in Toronto—the exact location where these two lovebirds made their official debut as a couple during a wheelchair tennis match.

The former Suits star looked chic as ever at this week’s black tie affair, wearing a tailored Alexander McQueen pantsuit and an ivory silk crepe bodysuit from Tuxe Bodywear. Could her choice of McQueen be a subtle nod in the direction of her fashion-forward future sister-in-law, the Duchess of Cambridge? After all, the Duchess makes no secret of her preference for the revered British designer.

Meghan even managed to pull off her first faux pas in the royal spotlight, charming audiences by playing down a mix-up with notes during the awards portion of the ceremony. That acting career sure came in handy!

Ahead of their royal wedding on May 19, Harry and Meghan have made good on their promise to travel across the UK, so that the American actress can meet as many locals as possible.

So far, the couple have visited south London, Cardiff and Nottingham and are expected to carry out several more engagements leading up to their wedding at St. George’s Chapel in Windsor Castle.