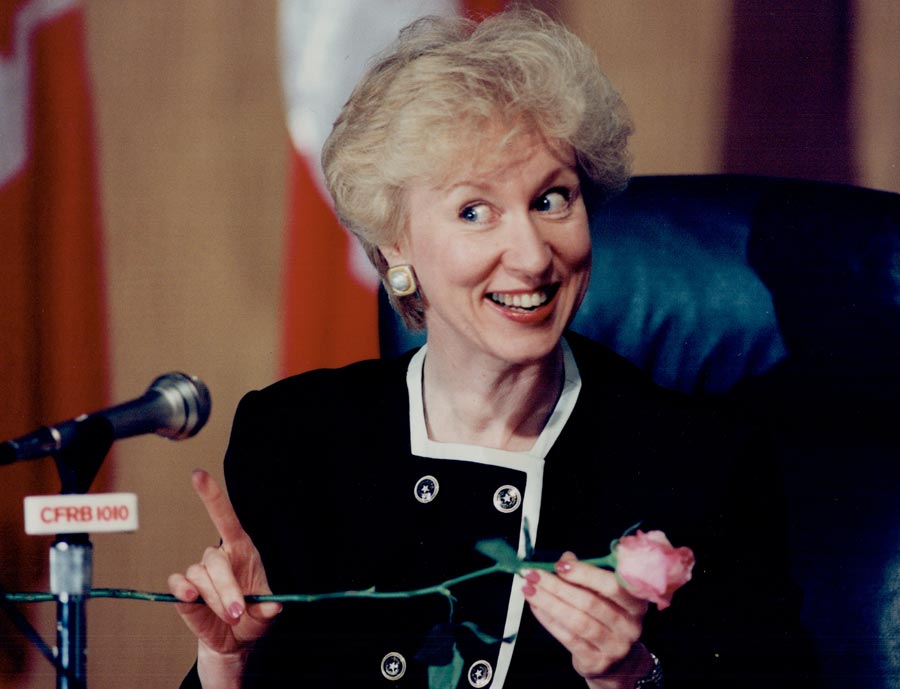 C’mon Kim. It’s not the end of the world if women bare arms on television newscasts.

And because the end of the world may be closer than we’d like to think, surely Canada’s only former female Prime Minister has more pithy things to tweet about. Wearing sleeveless dresses and tops in westernized countries is simply a sartorial style, like scarves and ruffles and turtlenecks.

Some women look better in them and are more comfortable wearing them. Some aren’t. It’s a personal choice. Sort of like choosing which political party you prefer.

Some women, like Michelle Obama, look fabulous with bare arms. It became her trademark style and she smartly chose it for the first official portrait (below) as First Lady.  And in the portrait unveiled this week for Smithsonian National Gallery, she was painted with bare arms.

And then there’s the famous portrait of you, circa 1993, bare shouldered, hinting at nakedness beneath your lawyer’s robe, looking quite fetching, as seen from this tweet (below) from Global’s Sophie Lui.

But as you pointed out in a follow-up tweet, those are portraits, not newscasts. So although you’re wrong to suggest that women ought to be covered up in order to deliver the news, you’re also right to connect the way women are viewed with how they appear.

He does have a point.

A woman addressing the United Nations, for example, would do well not to sport the deep cleavage flashed at the Grammys.

Likewise, you’ve never seen the Queen or any member of the royal family — female or male, for that matter — going sleeveless at an official event or walkabout during the day.

There is a certain gravitas, as Campbell noted, to not flashing flesh.

And yes, men do generally wear suits and ties when delivering the news.

What Campbell has tapped into with her controversial tweet is notable and it’s no wonder that it’s getting worldwide attention.

The whole issue of how women dress — and how they’re expected to dress —whether it’s for comfort, style, appropriateness, or the male gaze, has become linked to the current conversation about gender equality, the #MeToo movement and the requirement that women be covered up in some Islamic societies.

Should women be responsible in their dress for what other people, especially men, see and think?

Shouldn’t men be responsible for making sure it doesn’t?

Is gender equality in every way, not just in the workplace, a realistic goal?

While I was reading online about Kim Campbell’s debatable opinion, I was multitasking and watching the pairs figure skating event at the Olympics. The men were completely covered up while the women wore flesh revealing outfits, with flesh coloured mesh and tights to give the illusion of even more bare flesh.

Also, the men were doing the heavy lifting.

And one more thing:

More disturbing than Campbell’s tweet are some of the comments that dismiss her as being out-of-touch and over-the-hill because she’s 71. This whole gender and equality issue is challenging enough because of sexism but ageism has no place in the discussion.