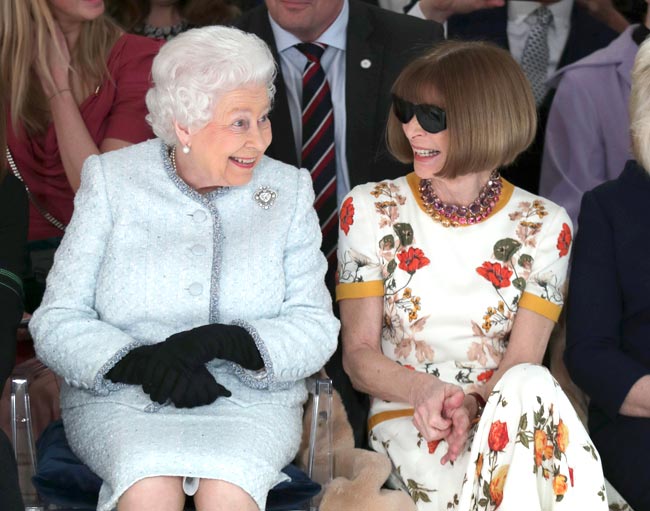 Two queens, sitting side by side — one a member of fashion royalty, the other the longest-reigning monarch in Britain’s history.

In an unprecedented move that sent shock waves through the fashion world, 91-year-old Queen Elizabeth made a surprise guest appearance at BFC ShowSpace during London Fashion Week on Feb. 20, sitting front row and centre alongside Vogue editor Dame Anna Wintour.

I mean, even the always-fashionable Duchess of Cambridge and Meghan Markle can’t boast to snagging a front row seat next to Anna Wintour. Move over, kids, because you’re not the only fashion icons in the royal family.

Don’t believe us? We’ve got photographic evidence of the already iconic moment.

Even Daily Mail royal correspondent Rebecca English was in total shock. She tweeted the photos below with the caption: “A sight I never thought I’d see.” The Queen was all smiles as she closely watched as emerging designer Richard Quinn showcased his colourful prints and headscarves — statement pieces that mirror Her Majesty’s own sense of style. (Well played, Richard.)

For the occasion, the Queen was positively glowing in an Angela Kelly duck egg blue, crystal-embellished skirt and matching jacket — her ever-present purse clutched in her black gloved hands.

In hindsight, perhaps it’s not a total shocker that the Queen would make a regal appearance at the annual fashion show. After all, the inaugural Queen Elizabeth II Award for British Design was recently created to be awarded to an emerging British fashion designer who shows originality.

The award, created by the Queen’s personal stylist Angela Kelly, recognizes an “emerging British fashion designer who shows exceptional talent and originality, whilst demonstrating value to the community and/or strong sustainable policies.”

This was the Queen’s first public appearance since she returned to London earlier this month after her extended Christmas holiday at Sandringham House in Norfolk.