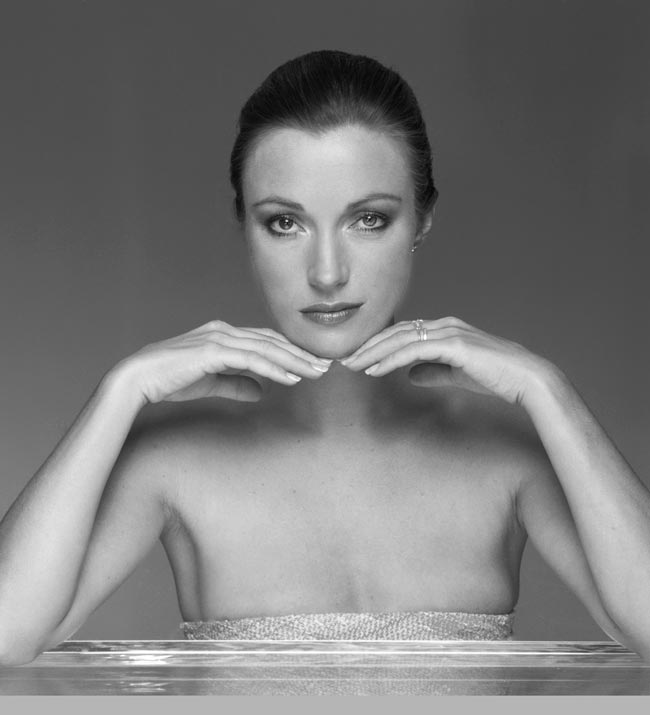 Forty-five years after first gracing the pages of Playboy magazine, actress Jane Seymour, 67, is back in the (almost) buff — the oldest person to ever pose for the famed men’s magazine.

The Dr. Quinn, Medicine Woman star, who doesn’t appear nude in the photos, is as confident and gorgeous as ever in the shots, which range from her relaxing in a slip on a bed to frolicking in the water wearing only a diaphanous gown that clings to her body.

“I feel much sexier now than I ever did when I was younger. Then, I was like, ‘Oh gosh, I’m supposed to be sexy. What is that?!’ There’s an enormous freedom in having lived as long as I have. Like my father used to say, I’m comfortable in my own skin,” she says in the piece accompanying the photos. “I haven’t done any surgeries or injections or anything. I haven’t done any of it. So I still look like ‘me.’ Everyday I’m kind of tempted, but then I look at people I know and I don’t [recognize] them. I’m authentically being me. That’s important to me.”

She also admits in the piece that she still sometimes attracts attention from men half her age. ““I say, ‘Oh, darn, in another life.’ I find that very flattering. I mean, usually you’re invisible by this age! I’m not trying to prove anything to anyone. When you’re younger, it’s all about ‘look at me.’ I’m not trying to get anyone to look at me.”

The fact that Seymour still turns heads is no surprise, even when those heads are attached to men thirty years younger. In fact, she joins a growing group of 60-plus women — including Kim Basinger, 64, who portrayed Christian Grey’s sultry, older ex-lover in 2017’s Fifty Shades Darker, French First Lady Brigitte Macron, dubbed the “glam godmother of the nation,” who, at 64, is 24 years older than her husband, President Emmanuel Macron, and Helen Mirren (72) and Maye Musk (69), the faces of L’Oréal Paris and CoverGirl respectively — all of whom are seizing the cultural moment and redefining perceptions of aging, beauty and sex appeal.

Seymour, who visited Zoomer in 2015 to talk about her Open Hearts jewelry line, first appeared (non-nude) in the pages of Playboy in the July 1973 issue, fresh off her performance as Bond girl Solitaire in the 007 flick Live and Let Die.

“Indeed, Seymour is more of a sex symbol now than she was when she played a Bond girl in 1973’s Live and Let Die, and—go ahead, blast this on Twitter—it’s precisely because of her ability to manage a duality of talent that foolish men often claim is impossible for women to achieve: She is both hot and funny,” Rebecca Haithcoat, who penned the feature story on Seymour, wrote, referring to the British actress’ work on the new Pop TV aerobics-themed comedy series Lets Get Physical. Seymour, who also posed in a 1987 issue of Playboy (again, not nude), posted a posted an image from the shoot on her Instagram account on Thursday, with the caption, “I’m THRILLED to finally share this with you! I was recently photographed and interviewed in my home by Playboy. I open up about my career, my family, feeling better-than-ever at 67 and so much more!” The photo has so far received more than 8,000 likes, with many commenters celebrating the pictorial. One, called @fieryblogmother, noted, “I will be 55 tomorrow and suddenly I feel that all is not lost looking at you at 67 and how absolutely beautiful you are! Thank you for inspiring me!” Later that day, Seymour posted a second photo from the shoot on Instagram, thanking fans for their support. “Overwhelmed with the positive responses I’ve received from all of you about my @Playboy interview,” she wrote in the caption. “Always remember that true beauty comes from within, so open your heart and let it shine through!” The Playboy piece isn’t all laughs and frolics, however. Seymour also opens up about an incident that occurred early in her career when she went to a high-powered Hollywood producer’s house to do a screen test for a role. The piece recounts how the producer noted he’d convinced everyone to give her the role she’d been trying out for and then put his hand “in the wrong place” on her leg and suggested that it was now time for her to do him a favour. Seymour, thankfully, was able to remove herself from the situation and get the man to call her a cab.

“He put me in a car and said, ‘If anyone knows you ever came here, if you ever tell anyone, ever, I’ll guarantee you never work again anywhere on the planet,’” she says in the story, echoing the many tales of abuse and harassment that have arisen in the wake of the #MeToo movement in Hollywood. “And he had that power. I got in the cab and cried, terrified.

“The only reason I’ve ever told that story is that women should have a choice. A lot of women took the bait and lived happily ever after. My problem was that my agent knew. I was put in a situation where I couldn’t show what I could do. And I’m a person who, when something bad happens, I get over it and move forward.”

Click here to see all the tasteful (and clothed) pics from Seymour’s Playboy shoot.