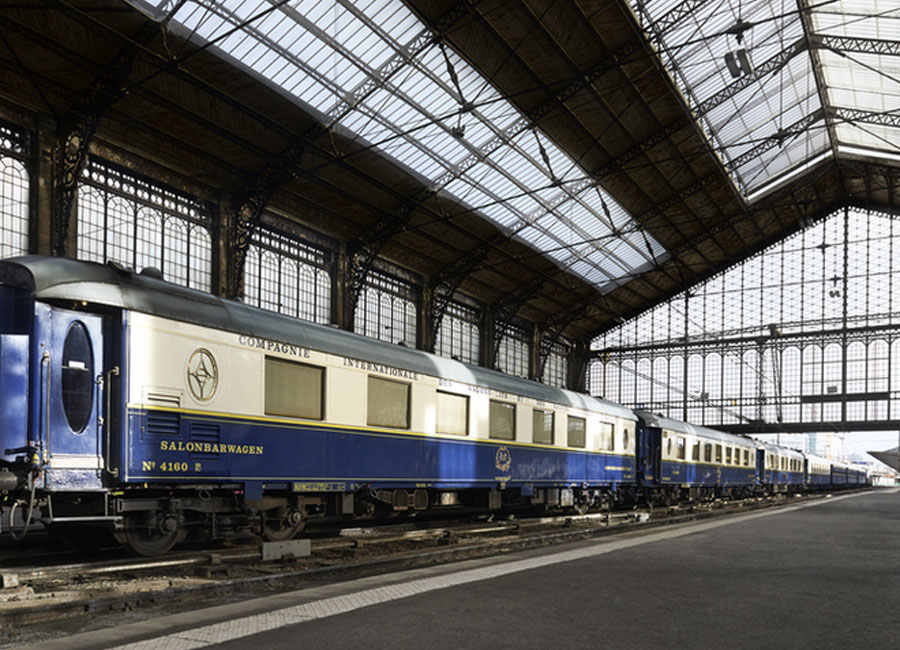 Just in time for the blu-ray release of Murder on the Orient Express, Nathalie Atkinson sat down with Agatha Christie’s great-grandson to talk about the murder mystery writer’s legacy.

The writer was a guest of Fox Home Entertainment; Watch Murder on the Orient Express, out on digital, dvd and blu-ray on February 27

For Branagh’s new adaptation of Agatha Christie’s Murder on the Orient Express, production designer Jim Clay recreated a bygone world inside Longcross Studios in England. He built several 360-degree sets and two working replica Orient Express trains, one of which he stranded on a precarious viaduct bridge surrounded by snowy mountains.

Today, however, I am in Paris on board the real Orient Express on behalf of Zoomer, socializing and dining in the historic ‘Anatole’ car as we wend our way from Paris to the Champagne region. The immersive excursion marks the film’s DVD release and is meant to conjure its bygone glamour, minus the murder.

Or maybe not. Our day begins as many beloved Agatha Christie plots do with—what else —the discovery of a body. We all play along as a troupe of actors in Orient Express purser, conductor and bellhop uniforms perform scenes of a murder mystery throughout the day. Everyone’s a suspect. A group of scientists once devised an algorithm to analyse Christie’s works in an attempt to see whether it could guess the murderer, I’m not sure we’ll fare much better but the prize for correct deduction is a set of retro Streamliner suitcases. As we boarded before dawn the Gare de l’Est was empty but for a few pigeons on the platform lined in red carpet, but even in the dark the brass letters on the iconic cream and blue Orient Express cars gleamed.

In its heyday the Orient Express departed twice a week from this station, though it was not a a single train but a route. Today, it’s a state of mind. It’s the enduring symbol of the art of luxury travel, and thanks mostly to Christie the Orient Express is as associated with glamour as it is with intrigue. The Armstrong case in her 1934 novel was inspired in part by The Crime of the Century, as the kidnapping of Charles and Anne Morrow Lindbergh’s son from their New Jersey home in the spring of 1932 was known. Although Christie was once delayed on a train journey by flooding, she instead combined the true crime case with another event from 1929, when a westbound Orient Express was stranded in snowdrifts at Çerkezköy for five days before finally reaching its destination.

Today’s passenger list is as illustrious as it was then—editors from Australia, Japan and the English Sunday papers mingle with American newspaper journalists, Vogue writers, influencers and personalities like Good Morning Britain presenter Richard Arnold (who is naturally more of a morning person than the rest of us combined).

As Christie proved time and again in her mysteries, and costume designer Alexandra Byrne demonstrated in Murder on the Orient Express, the careful observer can glean silent clues about fellow passengers simply from the information in their clothing details. But between the flutes of Veuve that soon appeared, the melodious tinkle of Baccarat crystal and the train’s lulling sway, you can’t help but fall into off-the-record conversation with strangers, like the the Swedish journalist with a penchant for niche perfume, or the social media star who once worked as Barbra Streisand’s personal shopper. That’s the nature of close quarters. When Poirot bumps into Michelle Pfeiffer’s Mrs. Hubbard, he offers profuse apologies. “One thing about train travel,” she replies; “you’re always knocking into somebody. It’s wonderful.”

So is mealtime — luxury train travel is decadent, and a noble Judi Dench’s Princess Dragomiroff would have worn a different memorable outfit for each occasion. Even if we wanted to, there’s no time for costume changes. Over morning coffee there are tiny intricate pastries to tempt Poirot’s sweet tooth; shortly thereafter, it’s time for lunch in an art deco brasserie near the Reims station as fortification before a tour of the Veuve Clicquot caves and more flutes of rosé Champagne. Back on the train for afternoon tea, slices of cake are misted, tableside, from an atomizer of Bourgoin cognac. There’s barely a glimpse of the scenery before cocktail hour sampling of The Valet, a concoction inspired by Christie’s plot.

Throughout the day we chatted with James Prichard, Christie’s great-grandson and the executive chairman and CEO of Agatha Christie Ltd, the company formed to manage the literary and media rights to her work since 1955. Christie’s cultural and economic legacy is considerable, and although most (64%) of this top British cultural export is now owned by American company RLJ Entertainment, the remaining stake is controlled by Christie’s descendants.

Prichard, 48, enthuses about how extraordinary it is to be back on board. It’s the latest of several trips since he first rode the Orient Express as a child during its 1980s revival. “It doesn’t lose its specialness, even at seven o’clock in the morning!”

Refreshingly, Prichard doesn’t shy away from picking his favourite Christie book, although admits it varies from time to time. “I love things like And Then There were None and Murder on the Orient Express because they are very clever and the plots are intricate, almost reverses of the same thing,” he says. “They’re technically very difficult and skilful. My current favourite though is A Murder is Announced.” He thinks it’s the best-written Christie not necessarily in terms of plot or ingenious crime, although both are strong, “but it’s beautifully written and an interesting take on the 1950s post-war Britain.”

“It maybe sacrilegious on this trip to be saying this,” he adds conspiratorially, “but I’m having a little of a Marple moment.”

Part of Prichard’s responsibilities in the Christie estate (a role taken over from his father Mathew in 2015) are to manage appropriate use, projects and in select cases, authorize continuations — like when crime writer Sophie Hannah penned The Monogram Murders “as” Agatha Christie, or The Mysterious Mr. Quin launched as a story through an app last fall. The rumours of the planned sequel to Murder on the Orient Express have just been confirmed as Death on the Nile so when we next see Poirot, will he be wearing summer linens? “One imagines, yes. As much as Poirot ever does. It will be amazing.”

Prichard also confirms the re-shoots of the BBC’s much-anticipated Ordeal by Innocence telefilm starring Bill Nighy, Catherine Keener and Matthew Goode have finished (he saw the new version the previous week). The BBC’s beloved now-annual ‘Christie for Christmas’ was postponed due to the sexual harassment scandal involving one of its leads, but will be soon be back on the schedule.

As Poirot once said: “I am not one to rely upon the expert procedure. It is the psychology I seek, not the fingerprint or the cigarette ash.” We are in a cultural moment where there’s an appetite for Christie’s more psychological novels and domestic noir. Why does he think they resonate?

“I actually think that the psychological element was always there,” Prichard counters. “I think people ignored it for a long time. People have this view of them as slightly lighter, slightly dare I say fluffier, as a puzzle.” People are only now giving the books their due respect and reading them properly again. He has started to re-read the books in their true spirit himself, “and I think it’s all there — the element of what people refer to as darkness.”

That inexorable darkness is manifest in Murder of the Orient Express and the fate of its twelve—a number with narrative significance—passenger suspects. The story challenges accepted notions of justice. In “Becoming Poirot,” for example, actor David Suchet says he worked his way up to filming this complex tale only toward the end of his memorable quarter-century turn as the Belgian detective.

“I knew that even after twenty years of playing Poirot, that it would be one of the most challenging performances of my career,” Suchet says in the documentary. It’s not untouchable because it became a famous film that won Oscars, or that Christie’s last public appearance was at the premiere of the 1974 premiere, which she is said to have greatly enjoyed, but because Poirot is truly “torn and tormented” about what to do about the solution.

“She took murder seriously,” Prichard says. “It’s a stupid thing to say in some way but she did not write them as puzzles, as parlour games. She wrote them as serious discussions of human behaviour and human nature. Bizarrely,” he adds, “and slightly scarily, she thought that most of us could be turned to murder.”

Prichard pauses and you could cut the air with the proverbial knife. It’s sliced by Richard Arnold, who quips, “Given the quality of the tea we’ve been served on the train, we could certainly all be driven to murder.” The sound of the train and its wheels of justice speeding to Paris are muffled by our peals of laugher. But he’s not wrong.