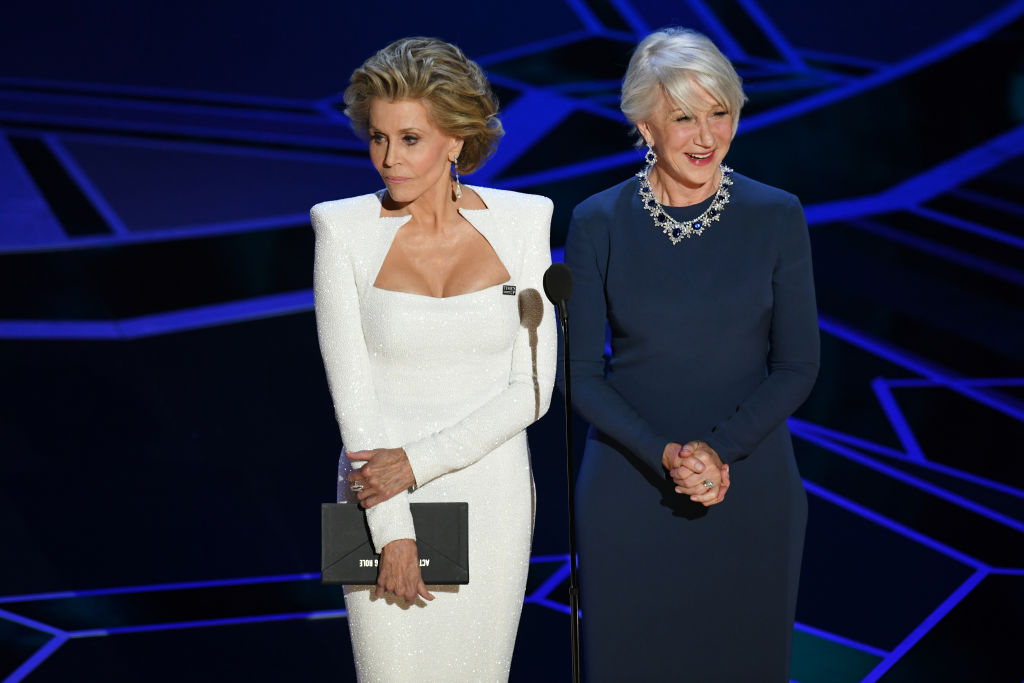 The 90th Academy Awards held March 4 in Hollywood was as usual, a glamorous affair and a return to a colourful red carpet following #MeToo and #TimesUp moments that saw women wearing black in solidarity at the Golden Globe Awards and the Baftas earlier in the year. And of course, the women over 45 – not to mention the 70-plus crowd – showed how it was done with gowns of all shapes and colours. Hollywood and fashion royalty, she always strikes the perfect style note on any red carpet. But she also always provides that element of surprise. She does not stick to a single trend or designer or even design aesthetic. She is that rare fashion chameleon who can effortlessly go from a floral bohemian gown to an all-black rock chick look.

Striding the red carpet in an Armani Privé gown, it was a sculptural masterpiece and an antidote to the soft, flowing goddess-like chiffon gowns that has become a red carpet mainstay.  Despite such girlish details like a sweet-heart neckline and giant bow – it was pure grown-up glamour, thanks to that stiff fabric, bold blue hue and a thigh high slit that provided sex appeal. As for her pointed toe pump with single diagonal strap, it added a touch of vampish appeal. White gowns continue to make an appearance on red carpets. But how do you keep it from looking like you’re headed for the chapel instead of centre stage to accept a statuette? Take a cue from this legendary actress and style icon. When wearing a white gown for evening, keep it streamlined and body-skimming. Details like structural shoulders and a sharp neckline keep it looking  sophisticated. When this actress  – who is older than the Oscars – came out to present the award for Best Costume, viewers raved on social media over how great she looked. Despite the fact that few knew or remembered that this was once a celebrated Hollywood star whose leading men included Marlon Brando, Paul Newman, Richard Burton and Henry Fonda. She took home an Oscar 63 years ago for Best Supporting Actress for her role in On The Waterfront.

Her appearance on the 2018 Oscar red carpet reminded everyone how a black gown paired with a pearl necklace, still, remains an eternally chic and timeless look. In a pearl embellished Atelier Versace gown, the singer/actress kept it simple for the red carpet but there was still a fair amount of sex appeal with a thigh high slit and asymmetrical neckline. Sometimes a simple evening gown needs just one exaggerated detail to make an impact. Sure, the fiery hue of her Reem Acra gown makes a powerful statement on its own, but add flowing floor-length sleeves and you double the dramatic effect. The actress turns to her go-to designer, Brandon Maxwell for an elegant and graceful red carpet gown. Elegant draping, soft folds and a defined waist make make this gown a perfect example of flattering evening wear for those who fall outside of the size zero category. Wear a shiny gold gown to the Academy Awards and you might run the risk of fashion pundits declaring the next day you looked like an Oscar statuette. But there is no risk of that faux pas with this actress’ Louis Vuitton gown. The ombre effect and graceful ruffle at the waist makes it elegantly flawless and sophisticated. This song writer has 9 Oscar nominations under her belt (nominated for Stand Up for Something, she lost out again this year) but was a standout in a sea of gowns on the red carpet in  her tuxedo look. She opted for a Saint Laurent le smoking outfit which featured a tux jacket with extreme shoulders adorned with crystals, armour-like, along the entire length of the sleeves. It was perhaps the perfect style statement to the new battle stance women are taking in Hollywood. Dressed in a form fitting Michael Kors gown, the award winning actress is proof that grown women can wear Barbie pink and make it look grown up instead of girlish. Just keep the sparkle to a subtle shimmer,  add the right amount of sex appeal with some glowing skin and big glamourous hair. Looking radiant and youthful In her Calvin Klein By Appointment gown, she was one of several women who wore white to the Oscars. And again, what keeps it out of bridal territory is the clean spare design, the subtle sparkle and the elegant, small ruffle on one shoulder. She’s played a Queen and is also a style queen but she’s not above taking a shot of tequila on the red carpet – as pictures went viral of the acting leg ending throwing one back before having her picture taken on the red carpet. The single diamond necklace added the right amount of decadence to her simple streamlined gown.