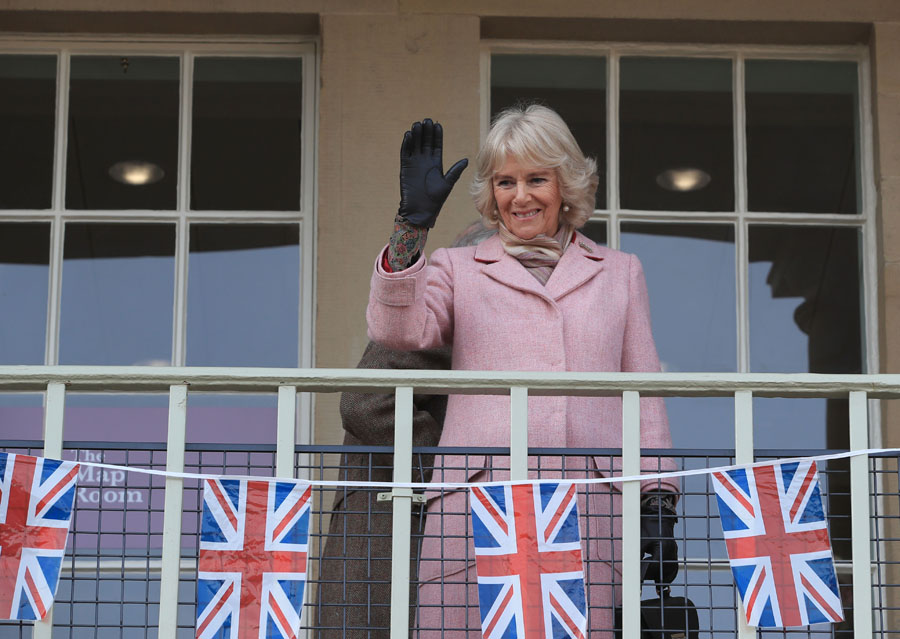 The Duchess of Cornwall waves to the crowd during a visit to the Piece Hall in Blackledge on Feb. 16. (Photo: Peter Bryne/WPA Pool/Getty Images)

Hold on to your fascinators, royal watchers, because — contrary to previous reports — there just might be a Queen Camilla in our future.

Until now, the Duchess of Cornwall’s future title when Prince Charles becomes King was said to be Princess Consort. It’s a respectable designation — one fit for a still-divisive woman who first landed in the gossip pages as royal mistress. And, for the most part, national approval continues to elude her. It likely always will.

However, the descriptor was removed recently during a revamp of the official Clarence House website — and it has caused a right royal ruckus in the UK’s rabid press.

The website originally posited on its Frequently Asked Questions (FAQ) section: “Will the Duchess become Queen when The Prince becomes King?”

The standard response: “As was explained at the time of their wedding in April 2005, it is intended that The Duchess will be known as HRH The Princess Consort when The Prince of Wales Accedes to The Throne.”

Now, poof! Both the question and its soothing answer have vanished.

Why the sudden disappearing act? After all, Camilla herself indicated more than a decade ago that she had no desire to be titled Queen.

The British press, however, aren’t buying it.

“Modifications to Prince Charles’s official website have given the impression that he is laying the ground for a change of heart,” writes Valentine Low of The Times.

Meanwhile, Majesty managing editor Joe Little, told The Mirror: “I think it’s a very interesting development that it should, after so many years, have been removed. It is something that is pertinent to a lot of people — what she will be called.

“I have always regarded the wife of a British King to be a Queen — and to give her a lesser title just really wasn’t [right] in my opinion. I very much hope that when the time comes she will be Queen Camilla.”

A royal spokesperson put the kibosh on the royal rumour, telling the Telegraph, “Our Frequently Asked Questions are updated regularly. This is one question that Clarence House has not been asked by the public for some time, which is why it no longer features.”

Needless to say, many people are still skeptical — myself included. Is it possible that certain members of the Royal Family (ahem, the Queen) might be softening her approach to her daughter-in-law? After all, Her Majesty has bestowed certain titles on Camilla over the years — most recently in 2016, when the Queen appointed the Duchess as a member of Her Majesty’s Most Honourable Privy Council (the first British princess by marriage to hold such a position).

According to the Sunday Times, however, Camilla’s popularity hasn’t exactly soared since her marriage to Charles. As of August 2017, “two thirds of Britons did not think she should be queen, and only 19 percent thought she was fit for the role.”

Not exactly a ringing endorsement — but remember this is a woman who was almost universally reviled (at times, rather unfairly) when the world first caught wind of her affair with Charles. She took the fall more than anyone else: a classic example of the despised Other Woman.

In comparison, the late Diana, Princess of Wales, was collectively praised and admired following her highly publicized split from the future King of England.

There’s no denying the continued existence of a rift between Lady Di loyalists and Charles and Camilla supporters.

In 2015, on the eve of their 10-year wedding anniversary, Charles praised Camilla for her charm and perseverance. CNN’s Max Foster asked the Prince of Wales: “People cannot believe it’s been 10 years. And in that time the Duchess of Cornwall has defined her own public role as well, hasn’t she? Has that been a challenge?”

Charles replied: “You can imagine it is a real, real challenge. But she’s, I think, been brilliant in the way she’s tackled these things.”

It seems safe to assume the uncertainty over Camilla’s royal title will remain until Charles ascends to the throne. In the meantime, keep calm and carry on.