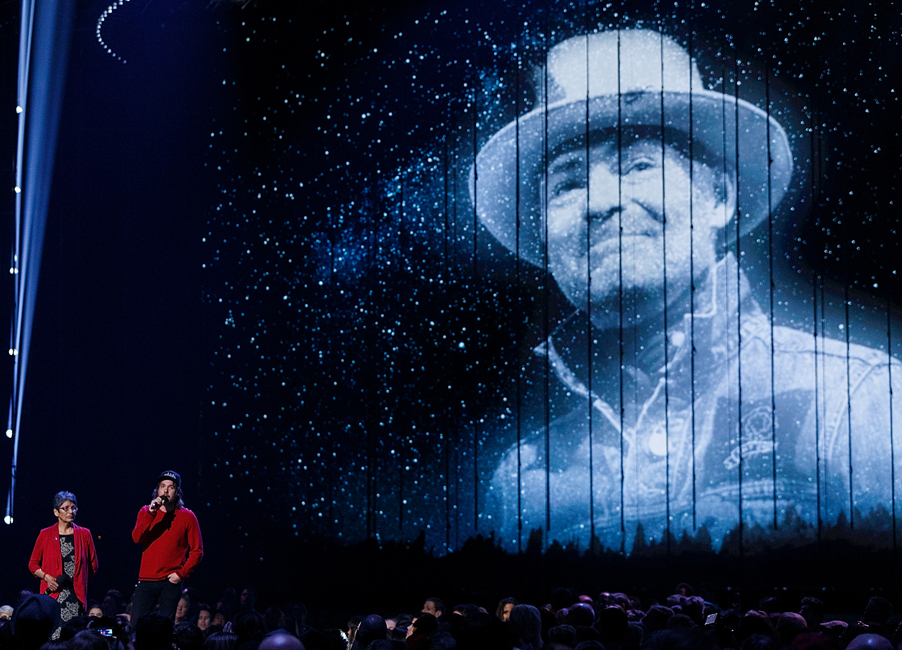 Canuck music legend Joni Mitchell once sang that, “Don’t it always seem to go, that you don’t know what you’ve got ‘til it’s gone” — a common theme at the 2018 Juno Awards Sunday night, broadcast from Vancouver’s Rogers Arena, which paid tribute to one giant of Canadian music while celebrating another of our most beloved bands.

The spirit and music of Gord Downie, the late Tragially Hip front man who passed away in 2017 at age 53 from brain cancer, permeated the evening, beginning with a tribute video featuring a host of prominent Canadians describing what he means to them.

Downie’s multimedia project Secret Path, which he completed during the final year of his life, spotlighted Indigenous rights issues by recounting the story of Chanie Wenjack, a 12-year-old Anishinaabe boy who died attempting to escape a residential school in Northern Ontario in 1966. Chanie’s sister, Pearl Wenjack, and Broken Social Scene’s Kevin Drew — who collaborated with Downie on Secret Path and his last disc, Introduce Yerself — also took the stage to honour the singer-songwriter.

“On his way to the beautiful goodbye that he gave us all, he asked us to take a good look at the history we were taught to ignore within this country,” Drew said on stage.

“Gord Downie was given a native name,” Wenjack added, choking back tears, “and his name was The Man that Walks Among the Stars. And with that name, that’s what he is now today.”

The pair then introduced musicians Sarah Harmer and Kevin Hearn, who performed Introduce Yerself, the title track of Downie’s posthumous final album, followed by Dallas Green, also known as City and Colour, who sang, with Harmer, an acoustic rendition of “Bobcaygeon,” one of the Tragically Hip’s most famous tunes.

Downie also proved one of the year’s big Juno winners, picking up multiple awards between the Junos broadcast and the untelevised ceremony the previous evening, including Artist of the Year, Songwriter of the Year (along with Kevin Drew) and Adult Alternative Album of the Year for Introduce Yerself.

“He wanted a country that was equitable and inclusive,” Mike Downie, Gord’s brother, noted while accepting the Artist of the Year honour with a third brother, Patrick. “And right now we have an incredible opportunity to do just that, for Indigenous and non-Indigenous people to come together like never before, change who we think we are, create a new country and a new Canada.”

“All this love and support is really helping with the healing,” Patrick added. “It is Artist of the Year but he was our man of a lifetime.”

The evening’s other big honorees, The Barenaked Ladies and former co-front man Stephen Page (all of whom range from age 47-50), were inducted into the Canadian Music Hall of Fame by Rush’s Geddy Lee.

“To our fans, your passion for our music and our shows continues to astound us,” Ed Robertson, the band’s lead singer and songwriter, said during their induction speech. “Thanks to Steve for starting this journey with me and to the guys for continuing it.”

The band also performed together for the first time since Page left the band in 2009, proving they hadn’t missed a beat while closing out the show with two rousing tunes, “One Week” and “If I Had $1000000.”

Elsewhere on the broadcast, Buffy Sainte-Marie, 77, who won the award for Indigenous Music Album of the Year for her disc Medicine Songs, delivered a passionate speech alongside singer Grimes about women in music, noting, “It’s time for change. It’s time for women to be recognized for our accomplishments and our value to this industry.”

And host Michael Bublé confirmed in his opening monologue that he and his wife, Luisana Lopilato, are indeed expecting their third child. The timing of the announcement proved poetic, as the couple was expecting their first son, Noah, during Bublé’s first stint as Juno host in 2013 and, last year, the singer had to forgo hosting duties as the then-three-year-old was treated for cancer.

Bublé, who took home the 2018 Adult Contemporary Album of the Year honours for his Nobody But Me, also performed a duet with Canadian songstress Diana Krall, 53, who won both Vocal Jazz Album of the Year and Jack Richardson Producer of the Year for her album Turn Up the Quiet – a rendition of Nat King Cole’s “L-O-V-E.”