After 15 Seasons We Bid Farewell to The Rick Mercer Report 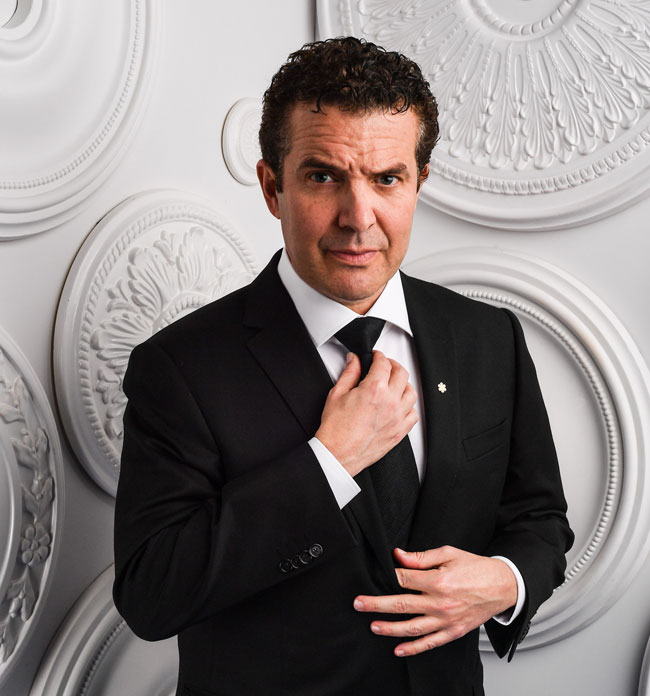 I’ll admit it. I wasn’t halfway into the first segment on the series finale of CBC’s The Rick Mercer Report when I became a bit verklempt.

Against a soundtrack of the late Gord Downie singing “Poets”, Mercer presented a rapid-fire montage of places he’d visited in the 15-year run of the show – only-in-Canada destinations like his hometown of Logy Bay-Middle Cove-Outer Cove, NL, to Cambridge Bay, Nunavut to The Pas, Man., to Grand Manan, N.B., to the Rideau Canal. Like a comedic Hank Snow. He’d been everywhere.

If he’d thrown in, randomly, a clip of the late Stuart McLean telling another Vinyl Café story about Dave and Morley to an audience in Swift Current, I’d have had to pause the show to collect myself. Such has the loss of national icons been lately.

Of course, Downie and McLean are literally lost to us. Mercer is still alive, and presumably will find something else to do with his unique combination of sarcasm and heart. As he said in his sign-off, “I’ll see you around!”

But looking back to when I first noticed him, I couldn’t help thinking that he’d learned to sting before he showed us the love. He’d been the kid who’d mounted satirical one-man shows like Charles Lynch Must Die and Show Me the Button, I’ll Push It before joining some fellow Newfoundlanders from the hilarious CODCO troupe to create the still-extant This Hour Has 22 Minutes.

There, he played against the stereotype of Canadian comedy making its sharpest statements behind masks (ie. characters). Where Mary Walsh had her Marg Delahunty and Cathy Jones her Babe Bennett, Mercer appeared in his weekly rant under his own name. He skewered politicians like Reform Party leader Stockwell Day, who, in 2000, promised “referendum legislation” that would force the government to hold a referendum on any issue that garnered 350,000 signatures.

Mercer’s response: An announcement of an online referendum demanding Day change his first name to Doris. It got a million signees, on a pre-social media Internet.

The Rant would become the foundation of The Rick Mercer Report, and as he reported in Tuesday’s farewell, over 15 years he’d trudged an estimated 42 kms in that graffiti-filled Toronto alleyway, haranguing the camera about the latest ludricrous offence by the government, corporate world or some other unavoidable segment of our common lives.

But very quickly, The Rant became simply a segment. Given the opportunity and resources to create a truly Canadian show, Mercer adopted the George Plimpton model of participatory journalism, making game (and usually inept) attempts at replicating the deceptively easy-looking things Canadians do.

There was plenty of that in the finale. He got thoroughly “pantsed” by various Paralympic Athletes as he tried to play wheelchair sports or perform Paralympic sailing, he wrangled cattle (his qualification: “I’ve watched Air Canada staff in action”). He turned everyday things into sheer fun (like his appearance on The Weather Network, where he used a green cloth in front of the green screen to pretend he had Harry Potter’s Invisibility Cloak).

And happily, he included a handful of such bits where he was joined by his latter-era partner-in-comedy Jann Arden – she of the sad songs that belie one of Canada’s sharpest wits. If Mercer does go on to another project, I hope he takes her with him, because they’re a natural duo.

Mercer never left sketch behind when he left This Hour. An ad for Cheese, in which he plays a guy who can’t leave the Havarti-baited mousetraps alone, was pure, sublime physical comedy. I was disappointed not to see my all-time favourite Mercer bit, an apocalyptic disaster broadcast titled, “There was snow in Toronto.” (Which still gets shared on social media at every “Snowmageddon”).

But another of my faves, for a Conservative dating site called C-Harmony, did. In it, Mercer – one half of a happy couple – says, “I’ve always been passionate about cutting government spending, and I’m angry all the time. And I wanted somebody to share that with.” His partner, played by Kathryn Greenwood, adds, “He’s the kind of guy who has no interest in art. And I like that.”

Though his politics were fairly up-front, Mercer seemed impossible for even the politically-opposed to hate. It’s telling that his Twitter farewell got hundreds of well-wishing responses and sad farewells, but last time I looked, not a single troll.

Finally, Mercer gave us one last deluxe wash in Canadiana, with a parade of celebs who’d been good sports on his show over the years. Again, some of them are no longer with us, like author Pierre Berton (who narrated a marijuana ad) and journalist/feminist activist June Callwood, who “demonstrated” her prowess as a field goal kicker.

Others included George Chuvalo, “Man in Motion” Rick Hansen (who bungeed in his wheelchair and screamed, “Hey! I can’t feel my legs”), Green Party leader Elizabeth May cutting down a tree, Margaret Atwood donning the pads and playing goal, and even Stephen Harper (playing dad to a pajama-clad Mercer).

If you’d cut me after that hour, I’d have probably bled maple syrup.

See you around, Rick!