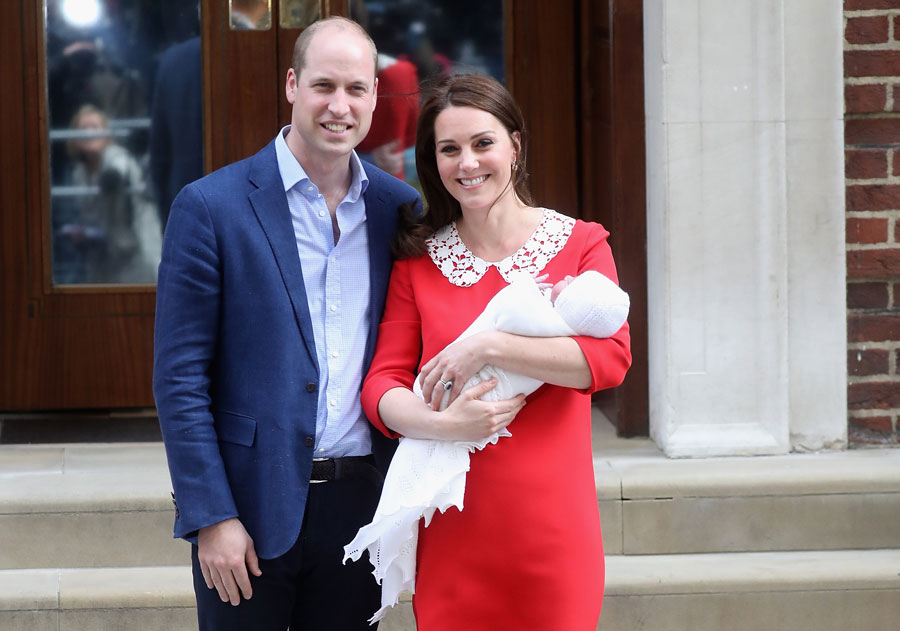 The Duke and Duchess of Cambridge show off their new baby. Photo: Chris Jackson/Getty Images.

After months, weeks and days of speculation, he’s finally here — the newest member of the House of Windsor. (Admit it, you’ve been on the edge of your seat since the Duke and Duchess of Cambridge first announced they were expecting back in September 2017.)

The new little prince arrived at 11:01 a.m. (Western European Time) on Monday, April 23 in the Lindo Wing of St. Mary’s Hospital in London, weighing a healthy 8 pounds, 7 ounces. The little bundle of joy — whose full name has yet to be announced — joins older siblings, Prince George, 4, and Princess Charlotte, 2.

Royals really love their traditional names though. With Prince George’s full name as George Alexander Louis and Princess Charlotte’s as Charlotte Elizabeth Diana, there’s no doubt the latest addition to the family will be in similar vein. Think: Andrew, Arthur, Charles or Edward.

And now that Kate has given birth to a baby boy, it also marks the first time (ever!) that a girl will keep her rank instead of dropping back a place behind a younger brother. That’s right, spirited little Princess Charlotte will not drop behind her new little bro in the royal ranking.

It’s all thanks to a welcome change of succession laws in the UK, which were updated shortly before the 2013 birth of Prince George to allow a possible first-born daughter of William and Kate to take precedence over any younger brothers. And it’s about time, too!

The decision was approved during a Commonwealth summit in Australia back in 2011, effectively changing a 300-year rule.

RELATED: Why Princess Charlotte Made History This Month

While it had previously been rumoured that Kate, 36, was considering a home birth to avoid the glare of the paparazzi’s camera lens, it was more recently confirmed that she’d deliver her third child in the same hospital where she gave birth to her first two tots. Despite experiencing the severe side effects of hyperemesis gravidarum (HG) during all three of her pregnancies, Kate never suffered any complications during her deliveries.

The new prince is now fifth in line to the throne, bumping uncle Prince Harry down a spot.

And here’s a little trip down memory lane, when we were first introduced to little George…

… and the spirited Charlotte. (How cute was that bonnet?)

So far, 2018 is shaping up to be a busier year than usual for the Royal Family; the Queen’s granddaughter Princess Zara is expecting a child this summer, while two other grandkids, Prince Harry and Princess Eugenie, will tie the knot with their partners, Meghan Markle and Jack Brooksbank. Both couples will exchange vows in St. George’s Chapel at Windsor Castle on May 19 and Oct. 12, respectively.