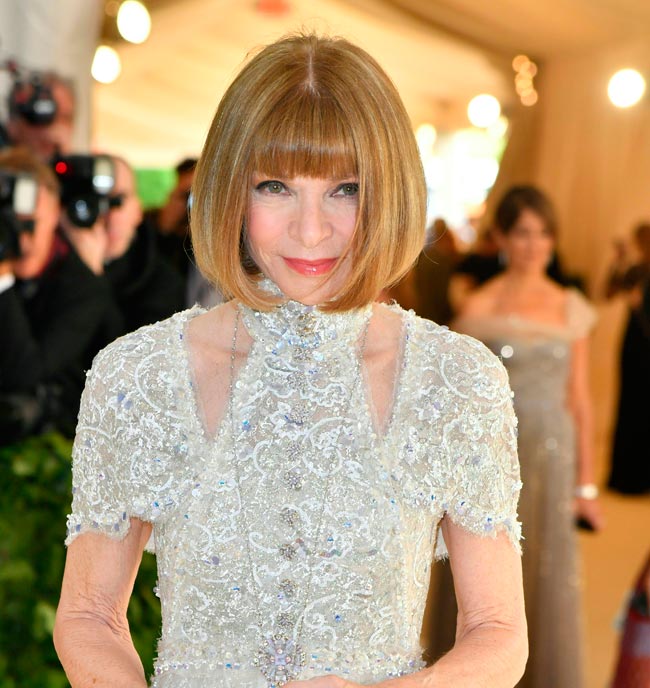 As the darlings of the fashion and entertainment world twirl and pout on the red carpet at last night’s Met Gala, “fashion’s biggest night out,” presided over by Anna Wintour, rumours are swirling that she will be stepping down as editor-in-chief of American Vogue.

The gossip-mongers have the notorious Wintour (that rare celeb who became even more of a household name when Meryl Streep played a character based on her, but not officially her), stepping down from her role as Condé Nast’s creative director and the editor-in-chief of Vogue this fall.

The fashion assemblage remained dignifiedly quiet when the rumour first began floating about like gossamer on a supermodel’s cape, but if it is true, it’s said to be happening after the September issue of the magazine is sent off to the printers this summer, the media landscape would be in for a seismic shift.

This year marks the British editor’s 30th anniversary at the publication, and, naturally, this isn’t the first time in the cutthroat world of fashion that gossip has grown surrounding her potential departure. Along with these latest rumblings, The New York Times dedicated some inches to what a post-Wintour fashion world could look like.

If the well-ensconced editor does decide to leave her perch, down which path would retirement take her? Aside from turning her keen eye to the creative side of the industry (we could easily see her as a consultant for many top brands!), here are some other endeavours we hope she takes on in a post Vogue world. Anna, can you hear us?

Printed Matter: In fall 2017, on The Late Late Show with James Corden, Wintour put to rest rumours of a 1970s affair with Bob Marley, that most notably appeared in Jerry Oppenheimer’s 2004 book, Front Row: Anna Wintour: What Lies Beneath the Chic Exterior of Vogue’s Editor-in-Chief. “I’ve never actually met Bob Marley,” she told Corden. Despite dispelling those rumours, we would still be very, very interested in Anna’s tales from behind the fashion seams, from how she made it to the top at Condé Nast, as well as her insights into how the #MeToo movement will shape the future for women, as well as any musings on her old pal Harvey Weinstein. Wintour has so far been a vault, not one to gossip about the industry that made her. Would a well-timed memoir give us the details fashion followers have been craving? We certainly hope so.

Call of the Silver Screen: She has made two notable appearances in front of the camera, in the documentaries The September Issue and The First Monday in May, the former dove deep into the inner workings of Vogue’s most popular and biggest issue of the year, and the latter into the machinations of how the Condé Nast team pulls together the MET Gala. But what wonders would arise should Wintour take her talent behind the camera, a la designer Tom Ford? Ford has been able to hone an aesthetic that is slick and glamourous, and one that plays very well with the Hollywood elite (both his films, A Single Man and Nocturnal Animals were nominated for Oscars). Wintour, who is adept at creative direction on the page and the web, could easily translate those talents to the screen. Just the idea of it enthuses.

Not-So-Accidental Icon: Iris Apfel’s rise in the style lexicon started about 10 years ago, after the now 96-year-old made an impression with the New York fashion set (as well as social media at large), and it was recently cemented that she is an emblem for the ages with the release of her book, Iris Apfel: Accidental Icon. But for Wintour, she’s been cultivating her persona for decades, to a point where her look has been costumed for many Halloweens, while also remaining intriguing and slightly mysterious. Apfel has amassed nearly 1 million followers on Instagram, so it stands to reason that an Icon (capital I intended) such as Anna would inspire legions of followers looking to hear her snappy judgments on the latest trends, while also trading quips with André Leon Talley on Instagram stories. And if her famous coterie of pals like Hilary Clinton, Grace Coddington, Sarah Jessica Parker and the like made appearances, social media fans will be all the better for it. Wintour is, after all, one of the originals when it comes to being influential.