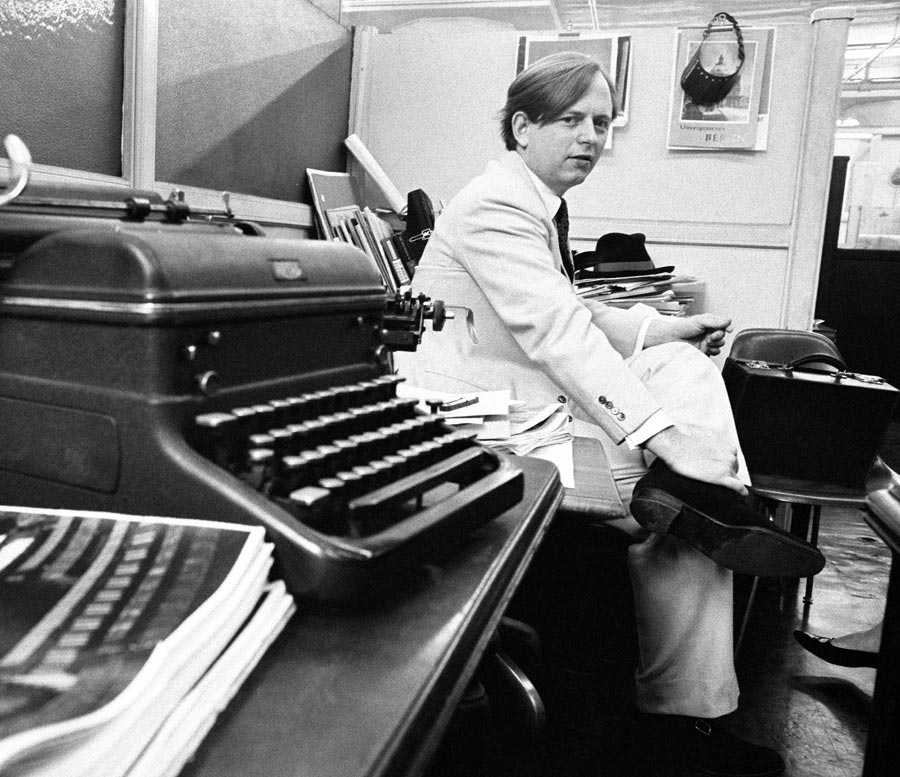 “Somebody like myself, perhaps, stands out on purpose with just minor variations on the conventional … I feel it's to a writer's advantage, since he sells a mass-produced product called a book, to catch attention any way he can.” — Tom Wolfe in an interview with The National Endowment for the Humanities. Photo by Jack Robinson/Hulton Archive/Getty Images

Tom Wolfe, who passed away in New York on Monday at the age of 88, will be remembered both for his scathing satire and as a sartorial standout. In his trademark white suits, the journalist-turned-novelist was a keen observer and chronicler of American life. From a career that spanned more than half a century, Wolfe leaves an impressive legacy of work: essays, criticism, long form reporting and, of course, fiction.

Here’s a roundup of the essential reading: While Wolfe didn’t initially set out to create a new form of journalism, his experimentation with the form, particularly including elements one normally associates with fiction (including the creation of scenes, extensive use of dialogue, and an authorial presence within the story) put him at the forefront of a a movement of writers that included Joan Didion, Gay Talese, Truman Capote and Hunter S. Thompson (though the latter bristled at his inclusion). The tome that launched a thousand trips, The Electric Kool-Aid Acid Test is one of the keystone texts of the American psychedelic era and perhaps the foremost example of the New Journalism. The 1968 book is considered the urtext of the hippie movement, spreading the gospel of psychedelic experimentation to a nation on the verge of a collective breakdown. Rooted in the principles of the New Journalism, Wolfe turned to longer pieces, including “These Radical Chic Evenings” (published in Radical Chic & Mau-Mauing the Flak Catchers) which details a dinner party held by composer and conductor Leonard Bernstein and his wife to raise awareness of the Black Panther movement and to brainstorm ways of assisting in the legal defense of arrested members. It’s a classic, scathing piece, and the term “radical chic” is still used to describe liberal adoption of radical causes as a way of increasing social capital (and assuaging white guilt). Similarly, 1976’s “The ‘Me’ Decade and the Third Great Awakening,” originally published in New York magazine (and now collected in Mauve Gloves & Madmen, Clutter & Vine) gave the moniker The Me Decade to the 1970s as a whole — a label we still use today. The Right Stuff, published in 1979, is Wolfe’s non-fiction magnum opus and perhaps one of the finest examples of long-form journalism. Based on seven years of research, Wolfe documents the pilots involved in the development of post-war experimental jet fighters and the men of the “Mercury seven,” NASA’s first astronauts. Along with the political and social backdrop of the time, Wolfe explores an internal blend of rigour, risk-taking and psychological fortitude which he referred to as “the right stuff.”

Master of the Universe Wolfe’s first novel, The Bonfire of the Vanities, was published in 1987 (much revised from its Dickens-influenced serialization in Rolling Stone magazine two years earlier) and was a critically-lauded bestseller (and the basis for a truly unfortunate film.) A scathing satire on life in New York City, and the United States as a whole, it captures its time with a lacerating insight — delving into race, class, religion, sex, politics, booze, greed and virtually every human failing you might imagine — while still feeling topical today. Anything following The Bonfire of the Vanities was bound to suffer in comparison, but A Man In Full, published in 1989, almost satisfies. Taking the same sprawling approach as Bonfire, Wolfe looks at Atlanta’s business and legal communities, exploring real estate, sexual violence, corruption, Stoicism, race relations, and — perhaps most memorably — animal husbandry.