Meghan Markle Takes Her Mum to Meet Ma’am, While Harry and Wills Walkabout 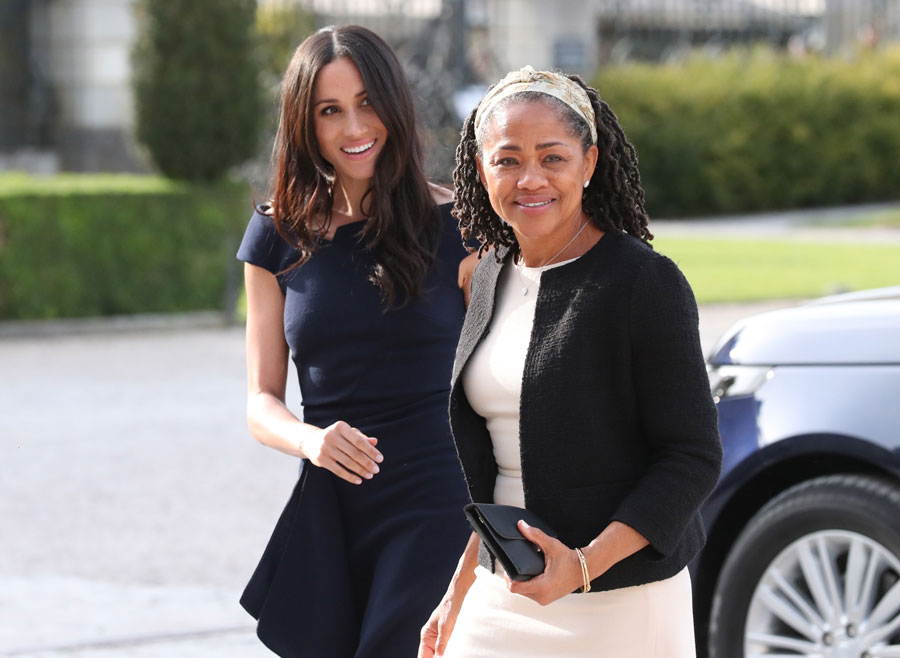 Meghan Markle and her mother, Doria Ragland arrive at Cliveden House Hotel on the National Trust's Cliveden Estate to spend the night before her wedding to Prince Harry on May 18, 2018 in Berkshire. Photo: Steve Parsons/Pool via Getty Images.

‘Twas the night before the wedding — and all was (finally!) calm.

After a whirlwind week filled with more than her fair share of family drama, Meghan Markle said she was feeling “wonderful” on the eve of her highly-anticipated nuptials to Prince Harry.

Speaking briefly to reporters outside the Cliveden House Hotel in Windsor after afternoon tea with the Queen, Meghan was all smiles as she arrived with mom, Doria Ragland.

Both, obviously, looked stunning and could easily pass for twins.

Around the same time, Harry was spotted in good spirits as he and best man Prince William surprised the raucous crowds outside Windsor Castle.

The impromptu walkabout outside the castle, where eager royal fans have already set up camp ahead of tomorrow’s main event, whipped out their phones to take selfies with the royal brothers — one of whom gifted the dashing groom with a little teddy bear.

The groom-to-be seemed perfectly at ease in an open-necked white shirt and jacket as he joked and shook hands with an eclectic gathering of international well-wishers. William was overheard saying he was ready for a celebratory beer.

By tomorrow morning, thousands of more people will lines the streets in the hopes of catching a glimpse of the newlyweds.

Harry and Meghan will now spend the night in separate hotels. It’s hard to believe that the next time they will lay eyes each other will be at St. George’s Chapel on Saturday afternoon when Prince Charles walks her part-way down the aisle.

Only two short weeks ago, Meghan had announced that her father, Thomas, would stand by her side, but she confirmed on Thursday that he was unable to attend the wedding due to health concerns — and, no doubt, the mounting scrutiny that came with those embarrassing pre-arranged paparazzi photos.

“Ms. Meghan Markle has asked His Royal Highness The Prince of Wales to accompany her down the aisle of the Quire of St. George’s Chapel on her Wedding Day,” the palace statement said. “The Prince of Wales is pleased to be able to welcome Ms. Markle to The Royal Family in this way.”

Meghan certainly seems content with the decision. Earlier this morning, she and Prince Harry were spotted happily waving to the crowd from the backseat of a Land Rover on their way to Windsor Palace.

They were on hand to accompany Meghan’s mom, Doria, as she met the Queen and Prince Philip, Duke of Edinburgh for the first time.

Ragland, a California-based social worker and yoga instructor and social worker, had been the fan favourite to walk her daughter down the aisle. Instead, she will join Meghan for the car journey to the chapel before taking her place in the congregation.