They Did! All The Highlights From the Royal Wedding 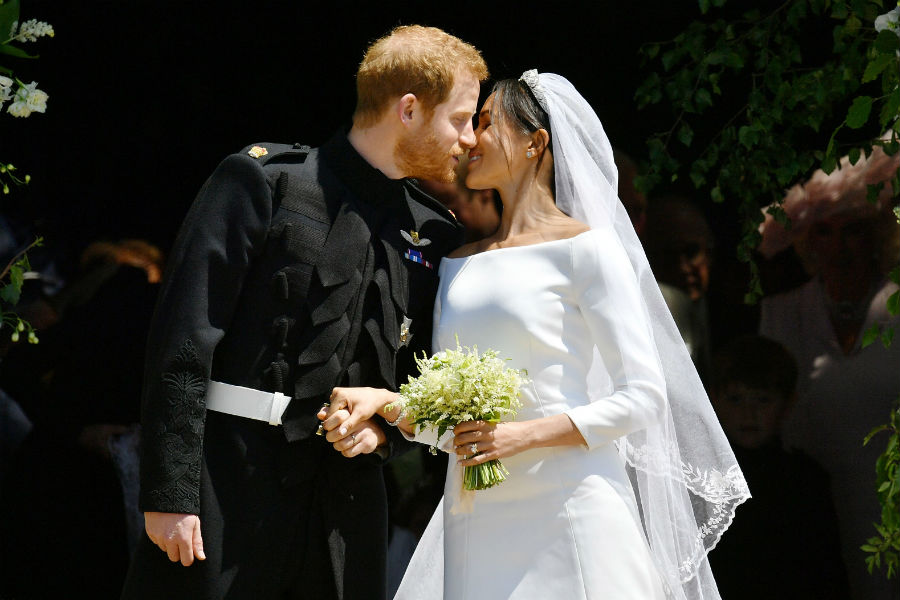 It’s all been leading to this: After months of anticipation, speculation and rumours the big day finally arrived — and went off without a hitch.

The ceremony blended tradition with a modern touch — with subtle tributes to Diana, Princess of Wales, and nods to Meghan’s African-American heritage.

Now, time for the beautiful pictures!

The first look
Approximately 30 minutes before the start of the ceremony, Meghan was spotted pulling up to St. George’s Chapel with her mom, Doria Ragland.

Mother and daughter
As the raucous crowds waved tiny Union Jack flags, Meghan and Doria were all smiles — and Twitter immediately started talking about the brides beautiful headpiece, a diamond bandeau tiara made in 1932 that once belonged to Queen Mary.

The little princess
And then there’s spirited little Princess Charlotte, sticking out her tongue before performing her duties as one of Meghan’s pint-sized bridesmaids. We just couldn’t resist this photo!

The Canadian connection
Seven-year-old twins John and Brian Mulroney (former prime minister Brian Mulroney’s grandkids) had prime seating — right in the backseat of Meghan’s car. Those lucky kiddos couldn’t ask for a better view of all the action!

The veil
The Mulroney boys, Brian and John, flawlessly performed their very special task — holding Meghan’s veil train as she entered St. George’s Chapel. I’m thinking the veil was an intentional little throwback to the one Diana, Princess of Wales wore at her 1981 nuptials to Prince Charles.

The wedding party
Toronto-based stylist and Meghan’s BFF, Jessica Mulroney (in blue), helped corral all the little bridesmaids and page boys before the walk down the aisle. Four-year-old Ivy (centre), Jessica’s daughter with Ben Mulroney (host of CTV’s Your Morning), performed her duties perfectly.

A break from tradition
After walking partway down the aisle alone — you go, girl! — Meghan met her father-in-law, Prince Charles, at the nave where he took her the rest of the way to the alter. Such a sweet moment!

The chapel
While Westminster Abbey is by no means shabby, St. George’s Chapel was the perfect setting for this Royal Wedding. Absolutely stunning!

A little PDA
One of our favourite moments was perhaps overlooked by many: the bride and groom quietly clasped hands during large portions of the service. So sweet!

The kiss
The moment we’ve all been waiting for: The kiss on the steps of St. George’s Chapel. This just might be our favourite photo of the day!

The royal wave
After that instantly-iconic kiss, Queen Elizabeth and Prince Philip waved to the well-wishers with other members of the House of Windsor.

Proud parents
Meghan’s mom, Doria, accompanied Charles and Camilla to the Queen’s luncheon after the ceremony at St. George’s Chapel.

The Cambridge clan
Catherine, Duchess of Cambridge made her first public appearance since the birth of her third child, Prince Louis, on April 23. The Cambridge foursome turned quite a few heads in their royal ensembles — although four-year-old Prince George seemed a tad bit shy.

The carriage procession
After sharing that lovely kiss on the steps of St. George’s Chapel, Harry and Meghan took a 20-minute carriage ride through the streets of Windsor. It goes without saying that the couple looked radiant, beaming and waving at the thousands of well-wishers.

Sealed with a kiss
These two lovebirds weren’t shy about showing a little PDA on the carriage procession through the streets of Windsor.

Party time!
Wow! Meghan Markle wowed us in her second wedding dress of the day — a sleek number designed by Stella McCartney. The bespoke white high-neck gown was made of silk crepe. Harry looked very James Bond-debonair in his black dinner jacket. Harry, Prince Harry
The royal was, of course, the perfect gentleman as he opened the car door for his bride.

The royal wave
The newly-minted Duke and Duchess of Sussex wave as they depart Windsor Castle for Frogmore House and the evening wedding reception hosted by Prince Charles.

Vroom vroom
The 1968 Jaguar the couple drove off in had a customized licence plate bearing the date of their nuptials.

Riding off into the sunset
Congrats Harry and Meghan! The official wedding portraits
It was a family affair as all the immediate relatives of the Royal Family joined the Duke and Duchess of Sussex — and their adorable little wedding party — for a group photo. I wonder if the Queen and Doria meant to coordinate? So sweet!
Quite possibly the most adorable photo of the day. Prince George and Princess Charlotte joined the Mulroney kids and the rest of the little wedding party for this memorable picture. Simply stunning
The Kensington Palace Twitter account shared this beautiful photo of the newlyweds with the caption:
The Duke and Duchess would like to thank everyone who took part in the celebrations of their Wedding.

They feel so lucky to have been able to share their day with all those gathered in Windsor and those who watched on television across the UK, Commonwealth, and around the world.