Everything You Need to Know about Meghan Markle’s Wedding Dress 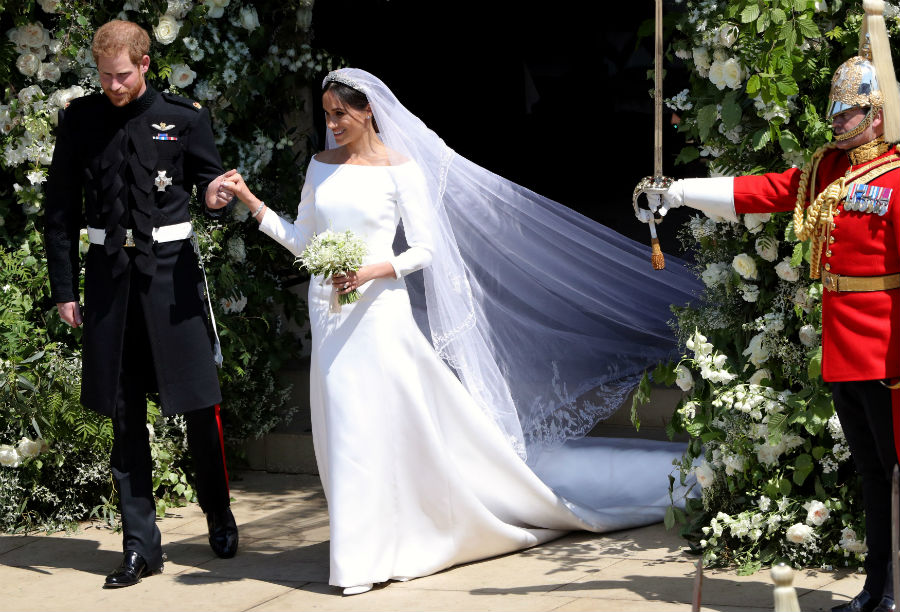 The big reveal did not disappoint.

Meghan Markle selected Claire Waight Keller to design her wedding gown — and the results are stunning: a perfectly simple, just classic white dress with no adornment, glitz or glitter. The fabric is double-bonded silk that gives dress its body.

The skirt moved with the bride as she walked and had a very small flare, without more traditionally princess-y petticoats to stiffen.

The line of the boatneck skimmed her shoulders, just covering them enough for the formal service at St. George’s Chapel. The resulting chic neckline showed only glowing skin, her only jewellery simple diamond earrings.

The long lace train and voluminous sheer veil added subtle pattern and texture to the minimalist look. The veil was made from silk tulle and embroidered with flowers representing the 53 countries of the Commonwealth. The veil also allowed for cameras to catch her professional poise. As a former actress, Markle has an ingrained sense of how to carry herself to best effect.

The provenance of the tiara, which is said to have been offered on loan from the Queen from a selection, is also simple clean of line. The geometric Deco pattern and narrow band of discreet diamonds is known as Queen Mary’s filigree tiara.

Waight Keller is an inspired choice, as she was only recently named Creative Director of the House of Givenchy, the first female to lead a major French couture house. Her first collection in January was received to great acclaim. She is also a major figure in British fashion, having previously helmed the British house Chloe.

Last-minute bookies had tipped Ralph & Russo, who designed Markle’s see-through embroidered engagement outfit, as the gown designer. Canadian-born Erdem Moriaglu was also on the list of favourites, as well as British pop royalty Stella McCartney in the days leading up to the wedding.

Both Amal Clooney and Oprah Winfrey showed up in McCartney, which was an early indicator the bride had gone in a different direction.

There is a big Hollywood sheen to this choice, for of course Hubert de Givenchy, the originator of his eponymous house, died earlier this year. The movie star connection is his longtime association with the greatest gowns of Audrey Hepburn, both on and off-screen. Givenchy was also a favourite designer of both Princess Grace and Jacqueline Kennedy Onassis: not bad choices for other icons for Markle to align herself with.

Princes Harry and William, with the Queen’s permission, wore the most senior military uniform available to them, the Blues and Royals. Harry was made head of the Royal Marines when his grandfather Prince Philip retired recently. The Prince did not disappoint fans of his ginger beard. He was clean-shaven at brother William’s wedding, but kept his whiskers for his own. Markle must be a fan.

In general, the hats are a bit more toned down in 2018 than they were back in 2011 at the last royal wedding. In a sweet plot twist, both the Queen and Markle’s mother, Doria Ragland, wore similar shades of lime green. Ragland also kept her facial jewellery intact, opting for a simple nose stud instead of the gold ring she usually wears.

Among the 10 pageboys and bridesmaids, there were three grandchildren of former Canadian prime minister Brian Mulroney, with seven-year-old John and Brian holding the bride’s train both entering and leaving the church. Four-year-old sister Ivy was a bridesmaid alongside little Princess Charlotte, 3.