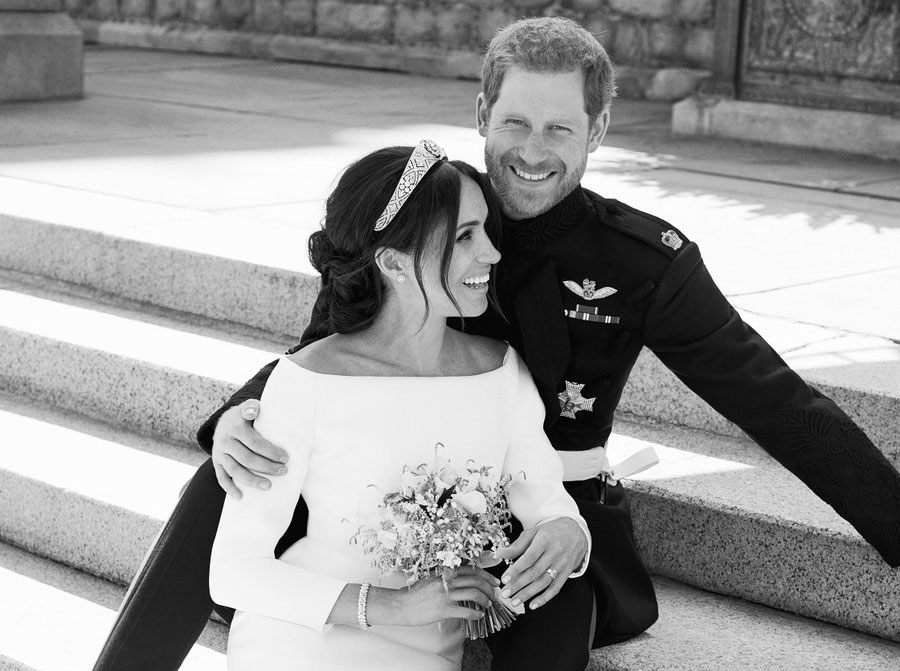 Whether you woke up at the crack of dawn to watch the Royal Wedding or hid under the covers waiting for it to all be over, it’s hard to deny the magic and romance of it all. The dress, the flowers, the kiss. All said, the wedding was flawlessly executed.

On Monday, as a way of thanking their loved ones and supporters, Prince Harry and Meghan Markle released three stunning wedding portraits — and, gosh, are they ever beautiful!

RELATED: They Did! All the Highlights From the Royal Wedding

The photos, taken in the Green Drawing Room at Windsor Castle after the couple’s carriage procession, were shot by fashion photographer, Alexi Lubomirski (more on him in a moment), who took Harry and Meghan’s intimate engagement photos at Frogmore House last December.

The first photo is a rare gathering of the entire immediate royal family (minus four-week-old Prince Louis, of course), the pint-sized bridal party and Meghan’s beaming mother, Doria Ragland.

“The Duke and Duchess of Sussex would like to thank everyone who took part in the celebrations of their wedding on Saturday. They feel so lucky to have been able to share their day with all those gathered in Windsor and also all those who watched the wedding on television across the U.K., Commonwealth, and around the world,” Kensington said in a statement.

“Their Royal Highnesses are delighted with these official portraits taken by Alexi Lubomirski and are happy to be able to share them today. They would also like to say thank you for all of the generous messages of support they have received.”

In a second group photo, Harry and Meghan posed alone with their adorable page boys and bridesmaids. Led by four-year-old Prince George and three-year-old Princess Charlotte, the eight other kids included godchildren and children of friends: Florence van Cutsem, 3; Remi Litt, 6 and her sister Rylan, 7; Ivy Mulroney, 4; Zalie Warren, 2; Jasper Dyer, 6; and twins Brian and John Mulroney, 7, who both had the honour of holding Meghan’s train as she walked down the aisle at St. George’s Chapel.

The newly-minted Duke and Duchess of Sussex also posed for a dreamy black-and-white photo on the steps of Windsor Castle, only moments after tying the knot.

As for Lubomirski? Well, the English-born photographer was only 11 years old when he first learned about his own royal lineage through the Polish House of Lubomirski. (So, that’s His Serene Highness Prince Alexi Lubomirski to us commoners.) Talk about a royal connection!

In 2014, Lubomirski even published a book, Notes for a Young Prince, that was originally intended as a birthday gift for his infant son, Sole Luka.

One exceptionally strong tie to Prince Harry, however, is the fact that Lubomirski was raised in Botswana, a place near and dear to Harry’s heart — and where the royal took Markle on an undercover date in 2016. (The newlyweds even went back to the South African country to celebrate Markle’s 36th birthday last year.)