You’re Never Too Old to Learn New Tricks (Or Games, for That Matter) 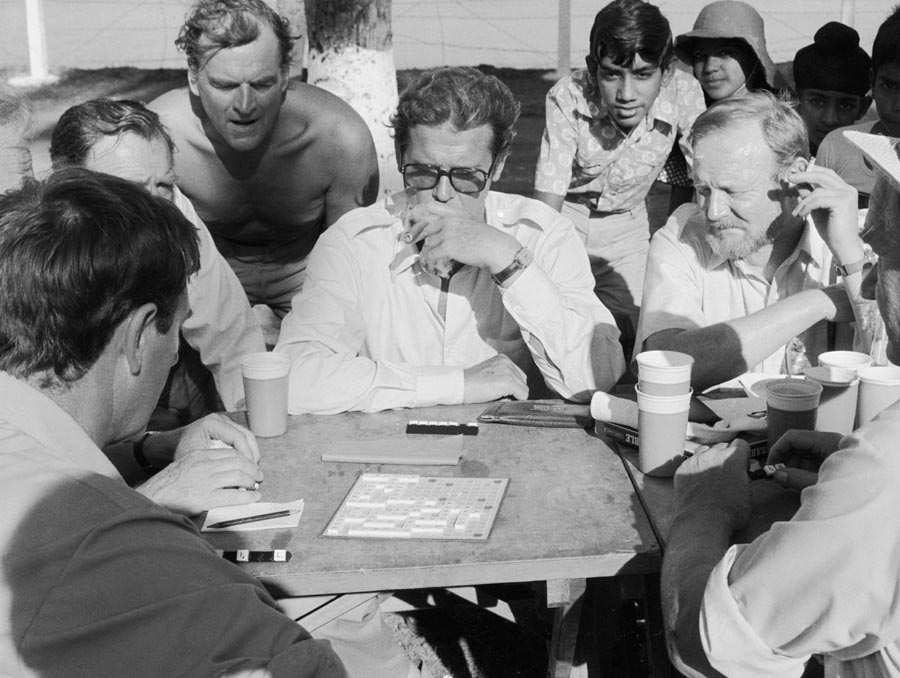 British actors Roger Moore and Trevor Howard (1913 - 1988) relax with a game of Scrabble on the set of 'The Sea Wolves: The Last Charge of the Calcutta Light Horse', filming on location in India, 1980. (Photo by Graham Stark/Hulton Archive/Getty Images)

Given my occasional criticisms of his time spent killing enemy soldiers and medieval creatures in fantasy realms onscreen, there was a tone of smugness in my twentysomething son’s voice as he made his case.

“You play online Scrabble at all different times of the day against people you don’t know. You are always aware of your Elo score and you get upset when it drops.”

I have to admit that he had me there. I’ve played the board games since I was eight and it was a family affair. But several years ago, I discovered of an endless supply of challenging real-life opponents. I play a turn of Scrabble to shake up my thoughts when I’m writing, I play in the morning with my coffee, I play a last few turns at night before I go to bed. I play while standing in lines and in theatres when I’m waiting for the movie to start. I’ve been in Calcutta, Paris and Tokyo making time for Scrabble with folks back home.

And yes, I am bummed when there’s a drop in my Elo score (an algorithm of wins, losses, points scored and my success against different levels of opponents).

In fact, according to the academic journal Computers in Human Behavior, 27 percent of active gamers are age 50 or older.

However, there is a distinct difference in how older “gamers” engage with the medium. Those same over-50s are least fond of shooter games (5%), action-adventure games (5%) and racing games (3%). They are most likely to play “Card and tile games” (46%), puzzle and logic games (44%) and trivia, word and traditional board video games (19%). So no Call of Duty, Game of Empires or World of Warcraft for most.

That divide came alive a while back when the same son tried to teach his mom to play Grand Theft Auto. When she “killed” a pedestrian, he couldn’t resist the urge to needle her. “You just killed a man. He had a wife and a family.” – “Nooo!” she said, her brain temporarily unable to process the fiction. Let’s just say she didn’t reach the next level.

Not content to take the word of an academic journal, I decided to take a straw poll of my Facebook friends. I have, after all, more than a thousand of them, all near my age, many of them writers like me, but also musicians, comedians, filmmakers, computer programmers and actuaries.

I discovered that my wordsmith friends were almost evenly divided between online Scrabble players and Words with Friends players. (Words with Friends, you may recall was the cause of an “air rage” incident in 2011 involving Alec Baldwin, who refused to turn off his phone mid-game as the plane was readying to take off). One of my Words with Friends-playing pals, Laurie Gelman, is nominated for a Stephen Leacock Award for humour writing for her first novel Class Mom. So, there’s a video game that may have started something.

Among my female Facebook friends, Candy Crush Saga is a whopping favourite. The apparently addictive game — which involves swapping colored candy pieces on a board in order to match three at a time, which then disappear making way for more (or something) — has been downloaded as an app almost three billion times worldwide. Friends’ moms have sent me invitations to play Candy Crush. You might as well offer me crack. No thanks.

But funnily enough, one of the most avid Candy Crush players I know is a guy, a comedian and motorcycle enthusiast Jay Brown, who has an Elo in the 1250 range on the latest version, Candy Crush Soda. “I have 40 or more PS3 games that I never play anymore. I can’t be bothered.

“Bottom line, it’s the ease of access. Stimulate me NOW!” he says. “I still love my PS3, but it has become like my grandmother’s china cabinet — strictly for when guests come over.”

A few of my friends, like Brian Koop, an actuary who plays on my pub trivia team, play good old-fashioned chess. Like me, Brian keeps track of his Elo, will often stop what he’s doing to make a chess move on his phone, and becomes annoyed with people who take too long to play a turn (like, more than a day).

Very few “serious” gamers in my lot, but one of them is Paul Chato, who readers may remember from the CBC Radio/TV comedy troupe The Frantics in the ‘80s (they still reunite occasionally onstage).

Now a web designer, Chato admits to playing FPS (First Person Shooter) and RPGs (Role-playing Games) like Uncharted and Skyrim. A gamer in his youth, he says he recently got back into it, so he’d “have something to talk about with The Boy,” he says of his own millennial son.

“It’s good bonding, though we never play games together because he was embarrassed to be whipping my a—.”

Kids today can be so patronizing.

The good news, according to that Computers in Human Behavior study, is that older gamers were less likely to suffer from depression than their non-gaming counterparts, and they scored higher for feelings of well-being and social functioning.

Which is news I would celebrate, except I have a couple of Scrabble turns to play.