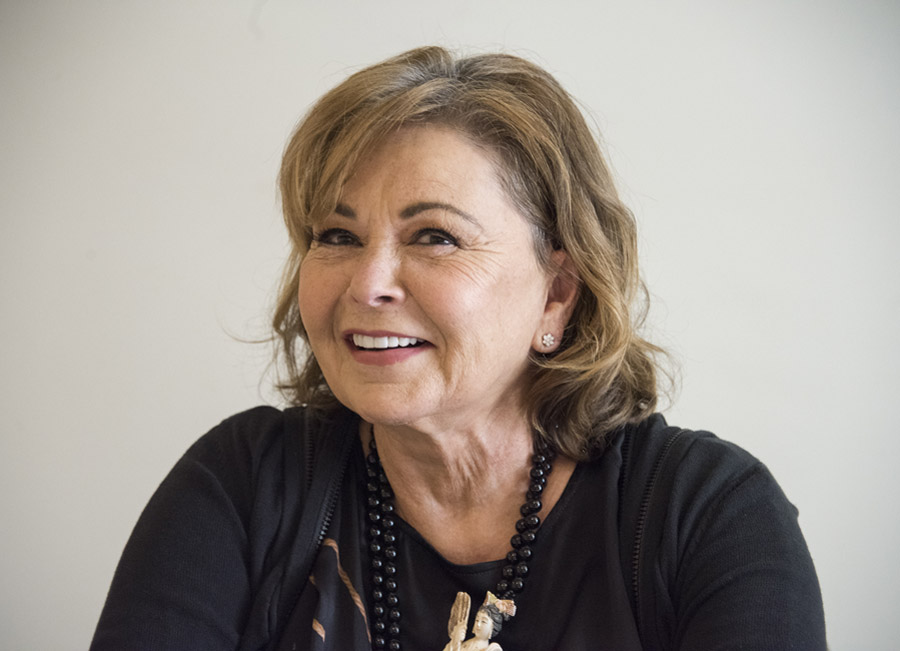 Photo by Photo by Vera Anderson/WireImage via Getty Images

Channing Dungey, the President of ABC entertainment, said in a statement that, “Roseanne’s Twitter statement is abhorrent, repugnant and inconsistent with our values, and we have decided to cancel her show” while Bob Iger, CEO of Disney, the network’s parent company, tweeted, “There was only one thing to do here, and that was the right thing.”

In her tweet, since deleted, Barr said that the Iranian-born Jarrett looked like the “offspring of the ‘Muslim Brotherhood & Planet of the Apes.’” When Twitter users called out the tweet for being racist, Barr responded with another since-deleted tweet that defended the first one, claiming that it can’t be racist because Muslim isn’t a race.

The comment blew up on Twitter, trending worldwide and leading to Barr eventually deleting the offending tweets and offering an apology, first tweeting, “I apologize. I am now leaving Twitter” followed by a longer note: “I apologize to Valerie Jarrett and to all Americans. I am truly sorry for making a bad joke about her politics and her looks. I should have known better. Forgive me-my joke was in bad taste.”

The apology, however, came too little and too late for many, given the comedienne’s longstanding support for U.S. President Donald Trump and his policies, which many also consider racist. Roseanne continued to trend on Twitter throughout the afternoon, with many using the hashtag #FireRosanne and calling on ABC to cancel the series. Comedian Wanda Sykes, who served as a consulting producer on the sitcom, tweeted amid the controversy to say that she would not be returning to the show. Shortly after, ABC announced their decision to cancel the series.

The decision, of course, surprised many – including some of those who called for the network to take action – given the success of the rebooted series’ first season, which debuted in March and aired it’s finale last week. As The Hollywood Reporter noted, “Roseanne is the highest-rated and most-watched series of the broadcast season, eclipsing NBC’s This Is Us and CBS’ Big Bang Theory — which had been in a heated battle for top status … one in 10 Americans has already watched Roseanne’s season premiere on one platform or another.” President Trump, who is known for ignoring or degrading the accomplishments of those who disagree with his views – for example, his derogatory comments about John McCain, an American Vietnam war hero who endured imprisonment and torture for five and a half years and refused release until other American captives were freed – contacted Barr to congratulate her for her show’s ratings. The original Roseanne run, from 1988-1997, was also a ratings success.

Barr’s history of both supporting Trump and attacking those perceived as the president’s enemies has landed her in hot water more than once. She routinely tweets and retweets pro-Trump conspiracy theories, from the Trump’s unproven and widely-disputed assertion that American intelligence placed a spy in his election campaign to accusations against everyone from Black Lives Matter to the Palestinian people to supposed left-wing radicals dubbed “Antifa.”

In March she tweeted, without any proof, “President Trump has freed so many children held in bondage to pimps all over this world. Hundreds each month. He has broken up trafficking rings in high places everywhere. notice that. I disagree on some things, but give him benefit of doubt-4 now” while most recently she attacked Chelsea Clinton, daughter of former U.S. President Bill Clinton and Hillary Clinton. In that tweet, again without citing any evidence, she accused the younger Clinton of being married to a nephew of billionaire business magnate – and frequent Trump supporter target – George Soros, even including the name “Chelsea Soros Clinton.” When Clinton took to Twitter to politely debunk the claim, Barr half-heartedly apologized and then accused Soros of turning Jews over to the Nazis to be killed and then stealing their wealth.

In light of such baseless and offensive comments and claims, the news of Roseanne’s cancellation proved cause for celebration for countless people across social media. Meanwhile, actress Sara Gilbert, who played Barr’s TV daughter Darlene, spoke out on Twitter, writing, “Roseanne’s recent comments about Valerie Jarrett, and so much more, are abhorrent and do not reflect the beliefs of our cast and crew or anyone associated with our show. I am disappointed in her actions to say the least.”

She then continued, “This is incredibly sad and difficult for all of us, as we’ve created a show that we believe in, are proud of, and that audiences love— one that is separate and apart from the opinions and words of one cast member.”