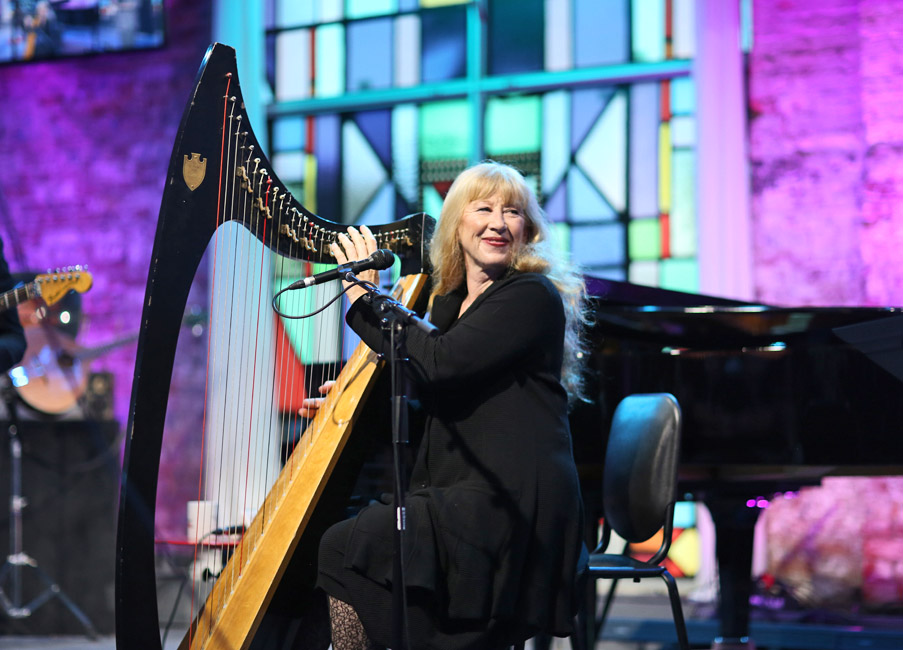 I look in the mirror and see Loreena McKennitt staring back at me. Literally.

I’m standing behind her, actually, and peering over her shoulder as the celebrated Canadian singer, musician and songwriter sits in a makeup chair and prepares for an afternoon performance at the Zoomerplex in downtown Toronto.  We catch sight of each other in the mirror and, via our reflections, exchange warm introductions — a sort of “through the looking glass” moment with one of our nation’s true musical treasures.

Of course, getting the 61-year-old to sit down anywhere for any length of time is an impressive feat. A resident of Stratford, Ont. by way of Morden, Man., McKennitt is always on the move. She travels often for research purposes, retracing the footsteps of the ancient Celts — her favourite musical subject — across nations and continents before sitting down to  compose an album inevitably inspired by the journey. She also tours extensively, kicking off her upcoming concert circuit in South America in October, in support of her latest disc, Lost Souls.

The album is McKennitt’s first album of original material in 12 years and is made of up songs she’s written but never released over the course of the last three decades. The ensuing tour has her performing, on and off, around the world through 2020. She’s sold 14 million albums worldwide and seems determined to visit fans in every corner of the globe.

All this considered, you can see why, for a journalist on deadline, McKennitt poses something of a flight risk. Given it’s quite a coup to catch her sitting still for an extended period of time, I jump right into the interview…

MIKE CRISOLAGO: It’s been about 12 years since your last album of original music. What made this the right time for Lost Souls?

LOREENA MCKENNITT: It was more a default in a sense. [Laughs] In 2006, we released An Ancient Muse and I also produced our concert at the Alhambra, and then we toured for a few years. And then in 2009 my mother became quite ill and I cared for her for the last two years of her life … and after that we gently went back to touring a little bit. And then I went back to Rajasthan in India to undertake the research for the next recording of original material … but when I got to the actual exercise of exploring how to render the music I realized it was going to be more complex and time consuming than I had planned. In the meantime, people were asking was I ever going to release something original again? So I said, ‘Well, I do have some of these songs in the cupboard that I’d written along the way that I like well enough but they just didn’t fit in certain recordings.’ So we looked at them and I said, ‘Why don’t we bring these forward?’

MC: And these songs were all written over the course of the last three decades. Once you heard them all together in one package, did you notice any creative maturation from the older songs to the more recent ones?

LMK: I think being the artist, it’s always very difficult to be objective. When I think of [her 1985 debut album] Elemental, which was some of the first effort of recording traditional material, it also reflected my engagement with theatre, particularly in Stratford … I see the poetry, the kind of theatrics or the influence of drama coming into the arrangements, the visual landscaping, being a large by-product of having been associated with the theatre as well as having worked a bit in film. And I see that those inclinations have continued through the course of my career. Once I became acquainted with the Celts being all these tribes that had fanned out across Europe and into Asia Minor I was able to broaden the palette of inspiration to Eastern and Middle Eastern influences. So this recording, in some ways, is kind of like a little sampling archive. [Laughs]

MC: Has your creative inspiration changed at all at this point in your career compared to when you were first starting out?

LMK: Certainly with some of these pieces, it’s changed and yet in some ways it’s stayed the same. With respect to the new material — original material — a decision I made fairly early on in my career was I wasn’t so interested in drawing upon my own personal life for inspiration but rather looking to the history of the Celts and that unbelievable road which spans so many geographical locations, which has then sent me off on my own travels. And each trip, whether it was to Mongolia or northern China or across Siberia or into Morocco and even the trip to India, it was a bit like a hobby archaeologist or anthropologist. It’s a modality that evolved. Certainly by the time of The Mask and Mirror in 1993, I had put myself in this modality.

MC: Given you travel so much to research and immerse yourself in a culture before writing an album, how many journeys are represented in this album?

LMK: This album didn’t involve many journeys at all. When I think of “Spanish Guitars and Night Plazas” I was reflecting back on my first trip to Spain — I think it was in February of 1982. I travelled to various places, including Grenada. It was the first time I’d ever travelled there. I just found the Spanish aesthetic, the music, the landscape, the food, the vitality of the people, something really exciting and inspiring. So that really is the only piece I can think of off the top of my head that was in any way impacted by travel.

MC: Do you enjoy the touring experience as much now as you did earlier in your career?

LMK: Oh yes, touring is in some ways the most enjoyable of the whole enterprise because I also have chosen to manage my career all these years … The touring process and infrastructure is really like a well-oiled machine and I enjoy meeting people when we’re out on the road. And it feels like the whole circle is closed when you’re finally able to present the music to the people live.

MC: As someone who travels so much, what tips can you offer the rest of us for getting the most out of our journeys?

LMK: There’s so many different modes and kinds of travel. There can be travel that’s just for fun and holiday, there can be travel that’s for adventure and travel for research. Particularly if I’m travelling with the hopes of connecting it to a recording, it’s a more research adventure type of thing. And in that capacity I like to travel on my own, which sometimes is a bit unnerving because I’m going to a few out of the way places, like the train across Siberia on my own in 1995 in December, or staying with a nomadic family in Mongolia. I can’t say that was unnerving — that was just really exotic and really fascinating.

You know, staying in simple places, close to people, close to where real life is occurring and not being to sequestered in the Holiday Inn. I mean, I think there are times for the Holiday Inn, or better, but it just depends what one is wanting out of their experience. If you’re wanting simplicity and repose, you go to one kind of place, if you’re wanting to do adventure you go to another.

MC: What other future goals do you have, in music or otherwise?

LMK: Well at this stage of my career, in music, I would say to be able to anticipate and find the right time to wind this down safely. I think the industry is a collapsed industry, the ecosystem that I once knew 20-30 years ago is mostly gone. To continue in an industry where it’s gone from artists seeing 24 or 25 cents per song on vinyl or CD down to maybe less than $1 per thousand plays is just not a viable business model. And I know that the landscape is changing all the time. In my view it’s like an industry in search of a new business model that has yet to prove viable and predictable. So it’s a very risky business but the music industry is not alone in that … I’m very lucky that I’ve chosen a management career the way I have and I can still keep going and retire tomorrow and I’m okay. But it’s also very precarious. So that’s one goal. The next one actually has nothing to do with the music industry, and that is trying to advocate for children and child development as it pertains to connection technologies. I think the unfettered misuse, unintended consequences of it is changing the human species and I think there’s a version of climate change going on in the human species. So for me, at the twilight of my career, I feel, “Where do I want to put my focus and energies the most?” And that’s really where I want to do it.

Lost Souls is available in stores and online now. Click here for more information on the album and upcoming tour dates.