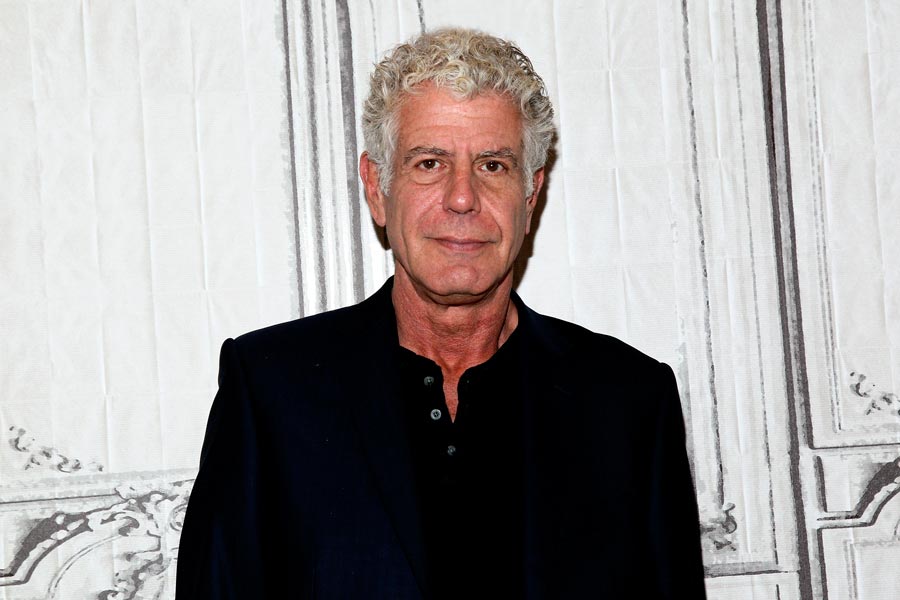 Chef, world traveller and bestselling food writer Anthony Bourdain, dubbed the “original” rock star chef, has died. According to CNN, which aired his popular Parts Unknown culinary travel series, a close friend, Chef Eric Ripert, found Bourdain unresponsive in his hotel room in France early Friday. His death is confirmed as a suicide. Bourdain was 61 and in France working on an upcoming episode of Parts Unknown.

CNN released a statement following Bourdain’s passing, noting, “His love of great adventure, new friends, fine food and drink and the remarkable stories of the world made him a unique storyteller. His talents never ceased to amaze us and we will miss him very much. Our thoughts and prayers are with his daughter and family at this incredibly difficult time.”

In the early afternoon, Bourdain’s girlfriend, Italian actress Asia Argento, 42, tweeted a statement, saying, “Anthony gave all of himself in everything that he did. His brilliant, fearless spirit touched and inspired so many, and his generosity knew no bounds. He was my love, my rock, my protector. I am beyond devastated. My thoughts are with his family. I would ask that you respect their privacy and mine.”

Bourdain’s first rose to fame when he pulled back the culinary curtain, so to speak, with his bestselling 2000 book Kitchen Confidential: Adventures in the Culinary Underbelly, which grew out of a New Yorker article and exposed the stress, drugs and turmoil atmosphere of restaurant kitchens while offering readers advice for eating out. He also wrote and spoke openly about his own battles with drug addiction.

The ensuing years brought more bestselling books as well as the opportunity to travel the world and, through various television series’, showcase global cuisine in context with the people, places and socio-economic climate that produced it. Between 2002 and his death he’d hosted four such shows, including A Cook’s Tour, No Reservations, The Layover and Parts Unknown.

“Bourdain was a master of his crafts — first in the kitchen and then in the media,” Brian Stelter, a journalist and colleague of Bourdain’s at CNN, wrote following news of his death. “Through his TV shows and books, he explored the human condition and helped audiences think differently about food, travel and themselves. He advocated for marginalized populations and campaigned for safer working conditions for restaurant staffs.”

During his culinary travels Bourdain made numerous stops in Canada, including in 2016 when he bestowed “national hero” status on a trio of Montreal-based chefs.  At the time he told the Canadian Press that, “I’m a huge fan and loyalist and evangelical on the subject of Martin Picard and Fred and Dave at Joe Beef. I mean, I think they’re not just good for Montreal. They’re good for Canada. They’re good for the world … “I’d put all three of those guys on the Canadian currency. If I were in charge of such things they would be national heroes. They’d be iconic figures. The Canadian version of Mount Rushmore would have those three guys up there and maybe Jen (Agg) from Black Hoof (in Toronto) also.”

His favoured Montreal chefs were featured on an episode of Parts Unknown and, last September, he took their advice and visited Newfoundland and Labrador to sample their east coast cuisine for his show. The trip received widespread press though it did come with its share of controversy, when Bourdain referred to his francophone companions as “Frenchies” and when a tweet about the Newfoundland episode referenced “Newfies” — both terms considered derogatory and insulting. Both Bourdain and the show apologized, noting no harmful intent, with the world-traveller tweeting last month that he is, “resolute in my love for Canada.”

Bourdain’s travels also earned him numerous accolades, including a 2014 Peabody Award for Parts Unknown, multiple Emmy awards and an honorary degree of Doctor of Humane Letters honoris causa in the Culinary Arts from The Culinary Institute of America.

He also became a proud and outspoken supporter of the #MeToo movement after his girlfriend, Argento, went public with her accusations of sexual abuse against Harvey Weinstein. Last November he hosted a dinner for Argento and fellow #MeToo activists, and Weinstein accusers, Rose McGowan and Annabella Sciorra and he was known to speak out not only in defence of the women who came forward with accusations, but against a culture of complicity, which he admitted he may have contributed to himself.

“We are clearly at a long overdue moment in history where everyone, good hearted or not, will HAVE to look at themselves, the part they played in the past, the things they’ve seen, ignored, accepted as normal, or simply missed – and consider what side of history they want to be on in the future,” Bourdain wrote in a piece for the website Medium, titled “On Reacting to Bad News,” last December, after his friend and fellow celebrity chef Mario Batali was accused of sexual misconduct. “To the extent which my work in Kitchen Confidential celebrated or prolonged a culture that allowed the kind of grotesque behaviors we’re hearing about all too frequently is something I think about daily, with real remorse.”

Meanwhile, online tributes from fans, fellow celebrities and loved ones continue to pour in. And, of course, so do the shocked and saddened reactions of those who worked around him. Another of Bourdain’s CNN colleagues, TV host Alisyn Camerota, noted of his passing that, “It’s just a horrible, horrible shock on every level because on his show, there is a celebration of life and all different cultures. The idea that he was suffering somehow is really heartbreaking.”

Bourdain’s passing comes just days after the suicide of famed fashion designer Kate Spade, who was found dead in her Manhattan apartment on Tuesday at age 55.