Duchess of Sussex Makes Her Trooping of the Colour Debut 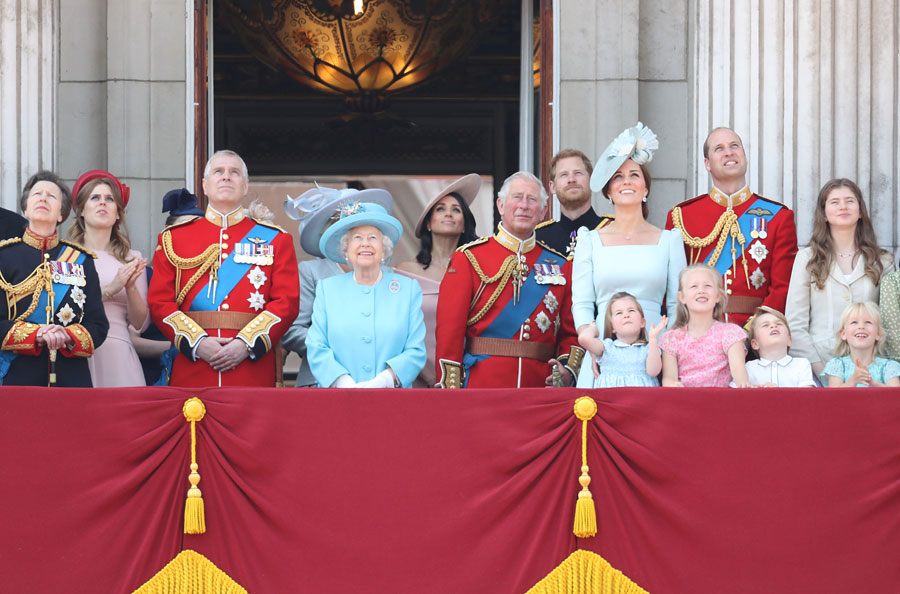 Members of the Royal Family gather on the balcony of Buckingham Palace. Photo: Chris Jackson/Getty Images.

Meghan Markle, the newly-minted Duchess of Sussex, made her Trooping the Colour debut on June 9 as members of the House of Windsor gathered on the balcony of Buckingham Palace for the annual family portrait in honour of Queen Elizabeth’s birthday.

Not even habitual scene-stealers, Prince George, almost 5, and Princess Charlotte, 3, could take our eyes away from the American beauty.

For those unfamiliar, the Trooping of the Colour is the most highly-anticipated event in the royal calendar (well, aside from last month’s Royal Wedding, of course) and is steeped in English tradition.

The boisterous birthday parade has been the official commemoration of a British sovereign’s birthday since 1748. Although Queen Elizabeth already turned 92 on April 21, the royals understandably prefer to party and socialize in warmer weather.

The ceremony involves more than 1,400 officers, 400 musicians and 200 horses. Her Majesty travels by carriage from Buckingham Palace to the Horse Guards Parade across St. James’s Park to inspect her personal troops — and the Royal Family always comes out in full force to help her celebrate. This year was no different, although there’s no denying all eyes were on Meghan.

The Duchess, wearing a pink Caroline Herrera ensemble with a matching hat by Philip Treacy, carried out her role with the poise and grace we’ve already come to expect from the former actress and humanitarian.

The Trooping of the Colour also marks Prince Harry and Meghan’s first public outing since they appeared at Prince Charles’ early birthday celebration at Buckingham Palace only three days after exchanging vows at St. George’s Chapel in Windsor. Since then, the couple du jour have jetted off to a top-secret honeymoon destination (Psst, it was reportedly in Ireland).

Meghan’s remarkable confidence at the event reminds us of when Catherine, Duchess of Cambridge’s made her Trooping of the Colour debut less than two months after her April 2011 nuptials to Prince William.

Kate (sporting an enviable post-honeymoon tan) was decked out in a double-breasted cream jacket by Alexander McQueen and a stylish black hat. The Duchess travelled to the Horse Guards Parade in a horse-drawn carriage alongside Camilla, Duchess of Cornwall, Prince Harry and Prince Andrew. (William was participating as an honorary colonel on horseback.)

However, the Buckingham Palace balcony appearance after the parade wasn’t her first — as royal watchers will recall, she and Wills exchanged a kiss at that exact spot on their wedding day.

Following this year’s Trooping of the Colour, Meghan will join the Queen herself for an official joint outing in Cheshire on June 14. Talk about a dynamic duo — and she’ll be doing it all sans Harry!

It’s the perfect opportunity for Meghan to learn the royal ropes, as it were, from Britain’s longest-reigning monarch. The pair are expected to help open the Mersey Gateway Bridge before moving on to open the Storyhouse Theatre — the latter of which the former thespian will certainly enjoy.