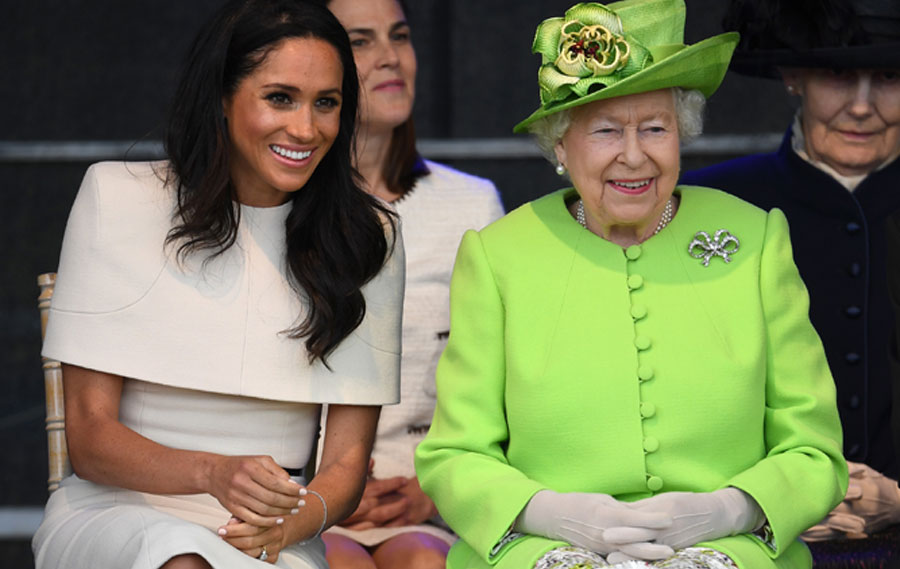 The newlywed Meghan, Duchess of Sussex experienced yet another royal “first” on Thursday when she accompanied Queen Elizabeth on an official engagement in Cheshire.

The pair travelled 200 miles from London via the monarch’s personal train, which is solely reserved for senior royals. (Think: Prince Philip, Prince Charles and Camilla, Duchess of Cornwall.) Not even Catherine, Duchess of Cambridge has boarded the exclusive train in an official capacity — yet another example of Meghan’s speedy integration into the Royal Family.

Described by many as “Buckingham Palace on wheels,” the train is only used a select handful of times a year to keep costs down. (According to Hello! Canada, the train was only used 14 times in 2017 at a cost of £900,000 to taxpayers. Gulp!) The train, which allows the 92-year-old monarch to travel in both style and comfort — was first used by Queen Victoria in 1842 and includes bedrooms with en-suite bathrooms and a 12-seater dining room.

This morning, Her Majesty stepped off the train wearing an eye-catching lime green suit dress by Stewart Parvin, while Meghan looked elegant as always in a beige pencil dress by Givenchy — and pantyhose! Yes, the new royal, who famously wore bare legs during her first royal outings, has opted for the more traditional look. And bye bye, messy bun!

The duo arrived in Cheshire sans Prince Harry — yes, Meghan can now carry out royal official duties without her new husband by her side — to a lively crowd of well-wishers bearing signs and flowers. The Queen and Meghan were on hand to help open the Mersey Gateway Bridge before opening the Storyhouse Theatre — a nice little nod to Meghan’s former acting career. The pair also attended a luncheon at Chester Town Hall.

The outing is viewed by many royal watchers as the Queen’s way of teaching Meghan the ropes when it comes to public engagements — and the pair seemed perfectly at ease with one another, exchanging smiles and laughs.

“It is the way of the royal family — all part of the training and getting used to being in public life and under public scrutiny,” the Queen’s former press secretary, Charles Anson, told PEOPLE. “The Queen knows the potential pitfalls of not giving [new members] a guiding hand. She can’t expect Meghan to know everything without being shown. I’m sure she feels Meghan needs a steadying hand in these early days.”

Previously, Meghan’s only other official engagements with the Queen came during the Commonwealth Day service in March and this month’s Trooping of the Colour, although she was joined by other members of the Royal Family at the time. Still thinking about the Royal Wedding? Subscribe to any of Zoomer‘s information-packed newsletters and get exclusive access to Celebrating Royals in Love — our digital keepsake edition — with more than 100 pages of specially-curated photos and stories. Sign up today!