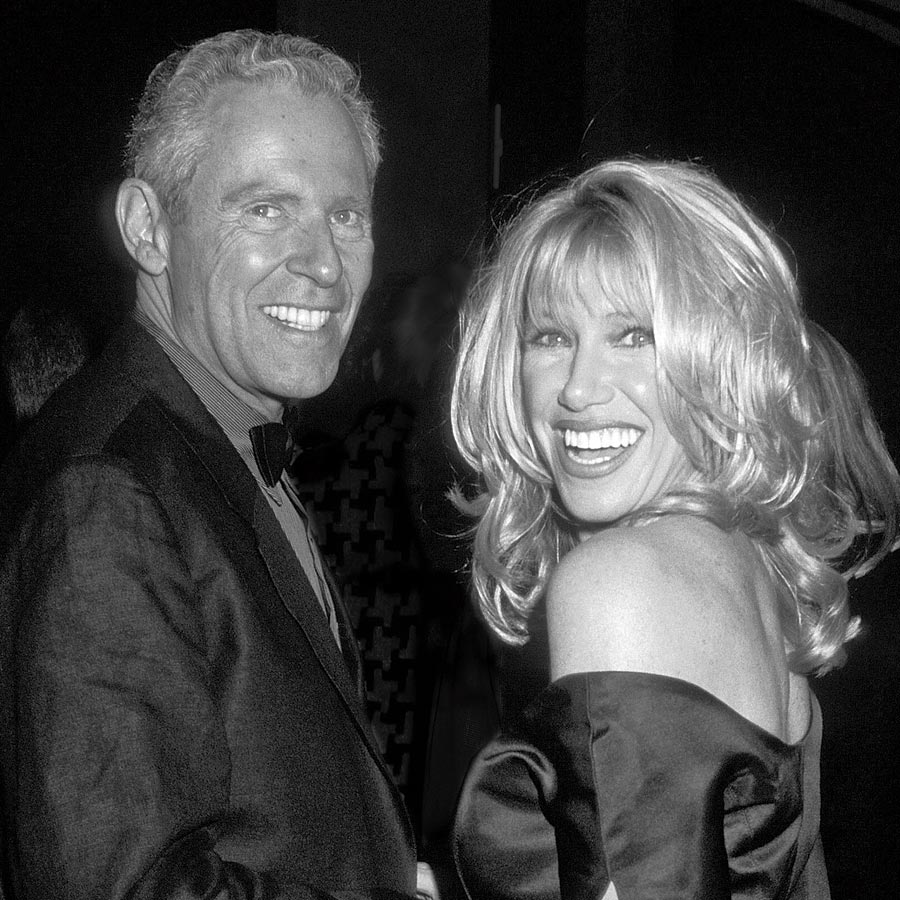 It tends to be near the end of a long work day when the television announcer’s voice booms through the intercom in Suzanne Somers’ home office, the actress explains — apropos, I think to myself, given the 71-year-old forged her fame in the small screen spotlight. She goes on, dreamily reminiscing about these “come on down” calls of a different sort, delivered by her husband, Alan Hamel, 81, Toronto-born game show host and namesake of Big Al’s Bar, the couple’s home watering hole. He buzzes to invite his beloved to indulge in a pre-dinner tipple, to which Somers glides on a fresh coat of lipstick and hurries to join him.

“It’s outdoor, and we watch the dusk turn to dark and put on that cocktail bar music: ‘You must remember this, a kiss is just a kiss,’” Somers muses, recalling the line from “As Time Goes By,” the tune made famous in Casablanca. “Pretty soon we’re dancing.”

It’s a routine that recurs four or five times a week, she adds, swooning through the details with the airy contentment of a youth struck by first love. Except, of course, they’ve been together for 50 years and married for 41 of them — a rarity in Hollywood, where celebrity unions often jump the shark faster than the Three’s Company spinoff, The Ropers.

The pair is all smiles when they arrive at this magazine’s Toronto headquarters, the Zoomerplex, to discuss their book Two’s Company, which reveals how they’ve navigated the highs and lows of their relationship. Somers breezes in, her blond locks popping against her black dress as she snuggles onto the couch next to Hamel, with his grey curls and leather jacket, who declares, “We haven’t spent one night apart in over 37 years. We’re together 24 hours a day. Most people couldn’t handle that. We love it.” Somers adds, “It’s a very romantic time in life.”

They aren’t shy about sharing the intimate details of that romance either — TMI be damned — from how they knock boots at least once a day to how Somers injects Hamel with testosterone each week on “Testosterone Tuesday” to boost his energy and sex drive. He smiles and quips, “So don’t call us Wednesday.”

“When I was younger, they used to call these ages the Golden Years,” Somers recalls, “and it had a negative connotation of two little old people sitting in a rocking chair. [Today] Golden Years has a whole new definition.”

The grandparents of six — Somers reveals they’re soon to be great-grandparents — they still work at least eight hours a day on upcoming projects. He brings her a morning coffee in bed and she cooks him organic meals. They hike regularly through California’s San Jacinto Mountains, indulge in tequila and maintain a bioidentical hormone replacement regimen, which they believe keeps them far younger than their birth certificates suggest. “I thought I would be old at 70,” Somers says. “I’m 71 now. I’m not old.”

And that’s when it becomes clear, somewhere between talk of tequila and testosterone, that the secret to this couple’s vitality is deceptively simple — they’re a genuine team. It’s been that way almost from the day they met back in 1968, on the San Francisco set of Anniversary Game.

Somers, 22 at the time and a single mom to a young son, tried out for a job as a prize model on the game show. The producers cut her after one day. Still, Hamel, the host, 32 and a father of two children on the cusp of a divorce, was immediately taken with the blond bombshell. “It was lust at first sight, but it was a lot more,” he writes in Two’s Company. He phoned her at home and asked her to his hotel suite, where they enjoyed pot brownies, Dungeness crab and their first intimate encounter.

The couple never looked back. The years that followed involved efforts ranging from blending their families to Somers attempting to carve out her big break. The latter arrived in 1973, when she appeared as the mysterious beauty in the white Thunderbird in American Graffiti. The part caught the eye of Johnny Carson, who invited her to make her national television debut on The Tonight Show, opening doors for guest stints on various TV series. Then, in 1977 — the year she and Hamel married — opportunity, ahem, came and knocked on her door. Somers landed her career-defining role of ditzy Chrissy Snow on the ABC sitcom Three’s Company.

The hit farce, about a man (John Ritter) pretending to be gay so he can room with two women (Somers and Joyce DeWitt), shot the 30-year-old to instant sex symbol status. As the series progressed she became, arguably, its most bankable star, a notion Somers tested in 1980, at the outset of the show’s fifth season, when she, with Hamel’s help negotiating, demanded equal pay to leading male TV stars of the day. The network refused, dropping her from the show.

“You were fabulous, and I never thought they’d let you go,” DeWitt said in 2012, on an episode of Somers’ internet talk show Suzanne Somers Breaking Through. “They could not respect the feminine contribution. You went up against ruthlessness, and it came down.”

In hindsight, Somers believes that the network brass viewed the situation, in part, as, “Here’s Chrissy Snow thinking she could be paid what men are being paid.”

“I believe that Suzanne Somers is right. Many people can’t get beyond the character an actor plays to see the real person,” Lynn Spangler, professor and author of Television Women from Lucy to Friends: Fifty Years of Sitcoms and Feminism, says. “However, their treatment of her could simply reflect how they saw all women.”

Today, revelations about female talents, like actress Michelle Williams, who was paid 1,500 times less than co-star Mark Wahlberg to reshoot scenes in the 2017 film All the Money in the World, and Jennifer Lawrence, who the 2014 Sony Pictures email hack showed made less than her male American Hustle co-stars, put gender pay disparity in Hollywood under increased scrutiny. Forty years ago, there were no email hacks or social media crusades triggering calls for equality.

“In [1980], when you have a system that is overwhelmingly run by men, the executives are men, the agents are men, the lawyers are men, there is no one to advocate for you,” Joanne Lipman, media executive and author of That’s What She Said: What Men Need to Know (and Women Need to Tell Them) About Working Together, says. “It’s a little frustrating that things haven’t changed since Suzanne Somers asked for equal pay decades ago.”

“It makes me laugh to think that Chrissy Snow from Three’s Company was an early pay parity feminist,” Somers adds. “I got hurt, but we didn’t get mad. It was Alan who said to me, when he came back from that non-negotiation [with ABC], that we’re going to make this work for us.”

And they did. Post-Three’s Company the couple doubled down, like outlaws blazing their own trail through show biz’s Wild West.

“My dear Al, who grew up shooting pool at Spadina and College in Toronto, has incredible street smarts, which he has applied to our businesses,” Somers says.

Hamel arranged for her to perform a stage show at the MGM Grand in Las Vegas for two years, a gig that led to a decade of playing Sin City while earning a 1987 Las Vegas Female Entertainer of the Year honour. Meanwhile, her endorsement of the bestselling exercise device the Thighmaster, a campy and ubiquitous presence on commercial TV in the 1990s, kept the actress in the public eye and allowed her to launch everything from jewelry lines to cleaning products and organic cosmetics.

“The Home Shopping Network — I did not share Alan’s vision on this, so I reluctantly agreed,” Somers admits. She was eventually inducted into the Direct Response (Infomercial) Hall of Fame in 2014.

She also travelled overseas to entertain American troops, returned to sitcoms in the late 1980s through the 1990s with starring roles on She’s the Sheriff and Step By Step as well as a Candid Camera reboot and competed on Dancing with the Stars in 2015, at age 68, among other projects. In addition she became a best-selling author, penning 26 books ranging in genres from self-help to cooking to health and wellness guides.

“If you think of all the women of the ’70s, I’m one of the few still standing because I consciously chose to continuously reinvent myself,” notes Somers.
The couple’s life, however, wasn’t all sitcoms and Thighmasters.

In 2001, Somers underwent a lumpectomy for breast cancer, declining chemotherapy and, instead, using a drug derived from mistletoe extract. She went on to champion various alternative medicines for battling cancer — high-profile promotion that drew criticism from the medical establishment. Her 2005 one-woman Broadway show, The Blonde in the Thunderbird, closed early after poor reviews and, in 2007, wildfires claimed the couple’s Malibu home. They moved into a temporary residence, which was contaminated with black mould, causing myriad health problems and, a year later, while staying at a hotel that was hosting a pharmaceutical conference, Somers fell critically ill.

After medical professionals stumbled over a diagnosis, she had her hair analyzed by an alternative doctor who told her she’d been poisoned with a drug called succinylcholine. “This was hardball,” she writes in Two’s Company of the suspected poisoning. “I could never prove it. Nor could I talk about it, lest I come off as a nutcase.” She fell into a deep depression.

As she’s prone to do, Somers parlayed negatives into positives, writing books about her setbacks in the hope of helping others navigate difficult situations. “I sell my problems. What other people might see as negatives, I see as opportunities,” she says. “The older I get, the more credence I get with my message.”

The actress notes that she has at least three more books in the works while hinting at a new fitness product that could arrive this year and, perhaps, in this age of television reboots, from Murphy Brown to Roseanne, even the reprisal of her most famous character. “All these years later, I feel that Chrissy Snow never finished expanding her character and someday, I may bring her back in another form. ”

Whatever the future holds, personally or professionally — and judging by their track record, it won’t go exactly as planned — the only certainty is that Somers and Hamel will face it together.

Zoomer‘s Arts & Entertainment Editor Mike Crisolago sat down with Suzanne Somers and Alan Hamel to discuss Somers’ new book Two’s Company, what aging means to them, their relationship, the family business, healthy living and a thriving sex life in their 70s and 80s.