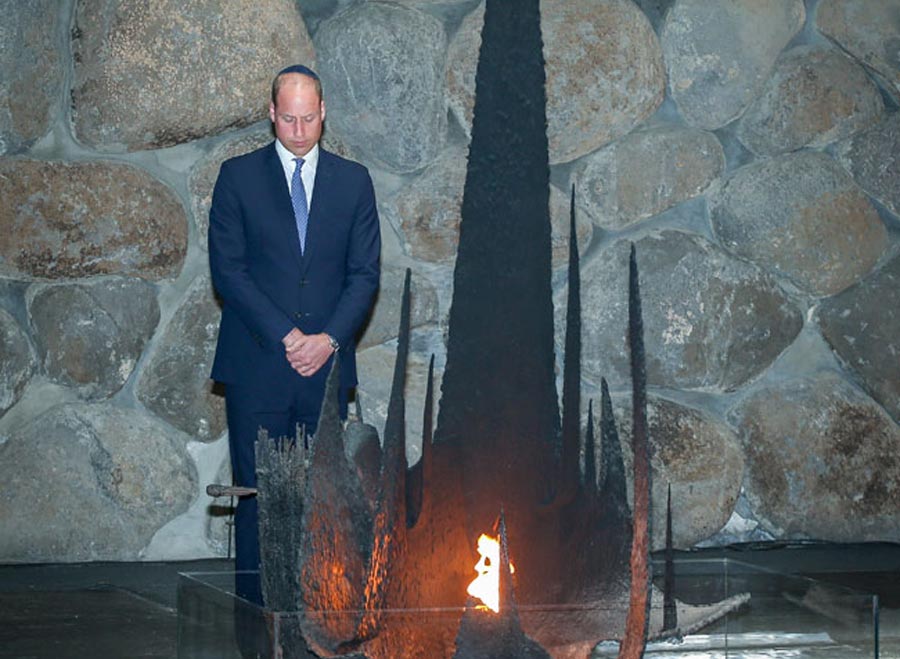 Prince William pays his respects at Yad Vashem's Hall of Remembrance on June 26 in Jerusalem. Photo by Ian Vogler/Pool via Getty Images.

Prince William quietly paid his respects to the six million Jews murdered in the Holocaust during a visit to Yad Vashem, the World Holocaust Remembrance Center, on Tuesday.

The Duke of Cambridge was in Jerusalem as part of his five-day visit to the Middle East on behalf of the U.K. government. On Sunday, William, second in line to the British throne, landed in Jordan for a “non-political” tour of the Middle East in which he will balance duties both royal and diplomatic.

During his stay in Jerusalem today, William spent an hour and a half walking through the halls of Yad Vashem.

“Terrifying. [I’m] trying to comprehend the scale,” he reportedly said, as he walked through the various displays and exhibits. In the Hall of Names, the royal paused to read some of the personal histories of the millions who perished during the Second World War. As a sign of respect, William wore a traditional kippah on his head as he later laid a ceremonial wreath in the Hall of Remembrance.

The trip’s significance has been noted by many as it marks the first official government-designated visit to Israel by a senior member of the British Royal Family.

Despite the gravity of William’s trip, however, he isn’t the first royal to visit Yad Vashem. In 1994, his grandfather, Prince Philip, travelled to Israel for a Yad Vashem ceremony that honoured his mother, Princess Alice of Battenberg who saved Jews during the Holocaust by throwing open the doors of her palace in Greece as a place of sanctuary. More recently, in 2016, Prince Charles attended the funeral of former President Shimon Peres.

In a statement before the tour, William’s spokesman Jason Knauf said, “The complex challenges in the region are of course well known. The non-political nature of His Royal Highness’s role — in common with all Royal visits overseas — allows a spotlight to be brought to bear on the people of the region: their cultures, their young people, their aspirations, and their experiences.”

According to numerous British news outlets, the historic trip was four years in the making and was originally scheduled to be performed by Prince Harry, but his wedding to Meghan Markle, Duchess of Sussex, created numerous scheduling problems and it was ultimately reassigned to the future king.

Prince William’s visit to the Middle East concludes on Thursday.