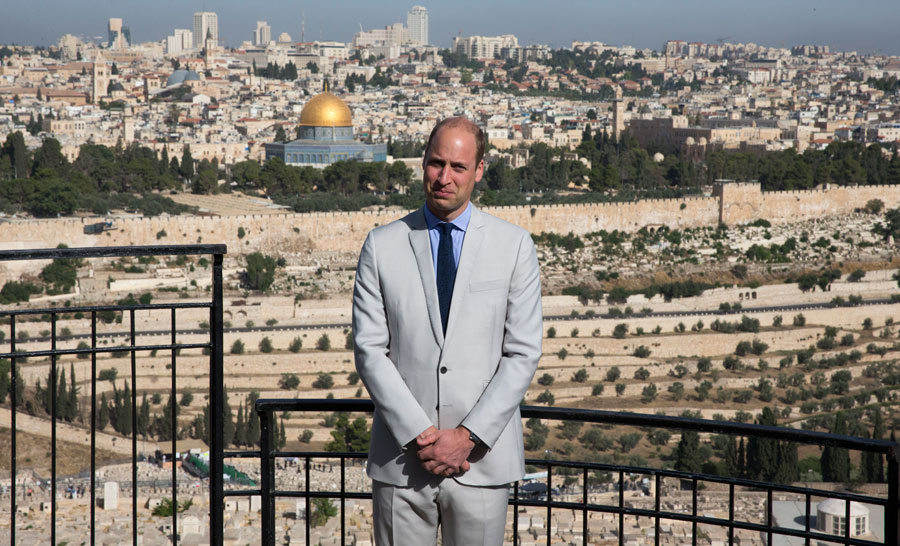 Prince William is on the final day of his official tour of Jordan, Israel and the Occupied Palestinian Territories and is the first member of the British royal family to make an official visit to the Jewish state. Photo: Robin Nunn-Pool/Getty Images.

It was a poignant conclusion to Prince William’s historic five-day trip to the Middle East. The future king was the first member of the British Royal Family to visit Jordan, Israel and the Occupied Palestinian Territories in an official government capacity.

On Thursday, during the last leg of his tour, William visited the Western Wall, placing a prayer in the ancient stones and taking a moment in quiet reflection, with his right hand resting on the wall. As a sign of respect, he wore a traditional yarmulke.

The Prince also set aside time to visit the  tomb of his great-grandmother Princess Alice, the mother of Prince Philip, at the Church of St. Mary Magdalene in Jerusalem’s Old City. Princess Alice is celebrated with saving Jewish families from the Nazis by throwing open the doors of her palace in Greece.

As William placed flowers at her tomb, he was joined by Father Roman, the head of the Russian Ecclesiastical Mission in Jerusalem, and Abbess Elizabeth, who reportedly told the prince to tell Philip that they continue to pray for Princess Alice.

Father Roman told William about some of his interactions with the royal’s 97-year-old grandfather.

“When I was showing [William] the family tree with the Russian links, I told him that I’d read somewhere that someone once asked Prince Philip if he had ever been to Russia, and that he had said, ‘They murdered half my bloody family, so maybe I’ll go, maybe not,’” the Daily Telegraph reported.

“[William] laughed and said, ‘He would say that.’”

Kensington Palace issued a statement ahead of the trip, stating it was “the first official tour [of the Middle East] on behalf of the government by a member of the royal family … The nonpolitical nature of His Royal Highness’s role — in common with all royal visits overseas — allows a spotlight to be brought to bear on the people of the region: their cultures, their young people, their aspirations, and their experiences.”

During the course of his tour Prince William met with Prime Minister Benjamin Netanyahu, President Reuven Rivlin and President Mahmoud Abbas of Palestine, among others.

According to numerous British news outlets, the historic trip was years in the making and was originally scheduled to be performed by Prince Harry, but his wedding to Meghan Markle, Duchess of Sussex, created numerous scheduling problems and it was ultimately reassigned to the future king.