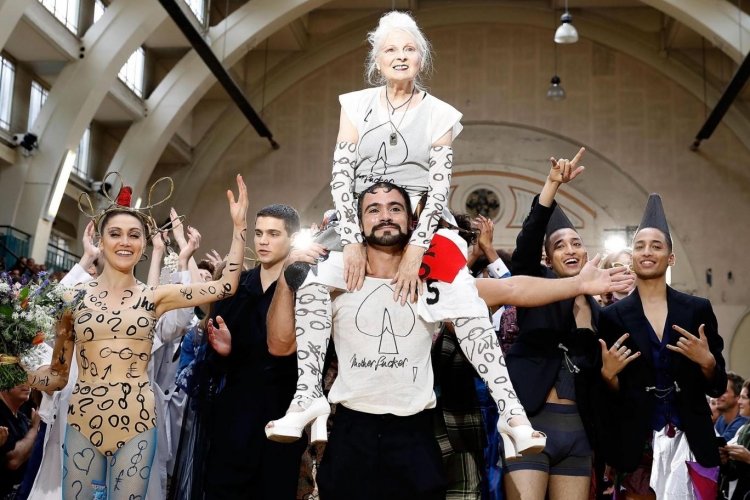 Early in the documentary film, Westwood: Punk, Icon, Activist, Dame Vivienne Westwood surveys a rack of designs in her studio before her runway show and declares, “I don’t know if I want to show any of this sh*t.”

The legendary British designer – at age 77 and four decades in the fashion business – is famously outspoken and can be a cantankerous interview subject. Westwood made it clear from the onset of the film that she was bored talking about her life, despite agreeing to allow first-time director, Lorna Tucker, all access to follow her around.

A self taught designer, Westwood was a provocateur from the very beginning of her career. She is credited for introducing the punk look to fashion and operated her iconic King’s Road store, SEX, with her partner at the time, Sex Pistols manager Malcolm McLaren. This early aspect of her career, she bluntly refuses to discuss. The film depicts McLaren in a dark manner, as someone who tried to sabotage her career several times.

While her work as a fashion designer was considered ground-breaking, she was often snubbed by the British fashion press and the establishment. One scene in the film showed the designer doing a fashion show on a television talk show and the audience roaring with laughter at each of her designs.

It took twenty years before the industry gave her the recognition she deserved, awarding her the Designer of the Year Award, twice in a row. (It’s one of the few humorous bits in the film – a contemptuous presenter’s surprise at the opening of the award envelope.)

Her career had many ups and downs – she once had to go on government assistance to make ends meet. She taught a fashion course in Austria and ended up marrying one of her students, Andreas Kronthaler, who designs a good part of the collections today.

Despite being in her late 70s, Westwood remains a tour de force, wearing six inch heels and riding a bicycle to work. She’s also passionately active in several environmental causes, which provides a conundrum for her as a designer as she grapples with her ever-expanding business and how it might be impacting the environment.

The story of the iconoclastic designer’s life is one that has many fascinating moments and is a rich subject to mine for a documentary treatment. But while the film did a roll call of her accomplishments, there is a feeling it didn’t quite manage to get to Westwood’s soul, to find out what truly makes her tick or what makes her want to go on in fashion, despite misgivings. Perhaps, it was the designer’s famous prickly nature, which was the shield that prevented the film maker from getting too close.