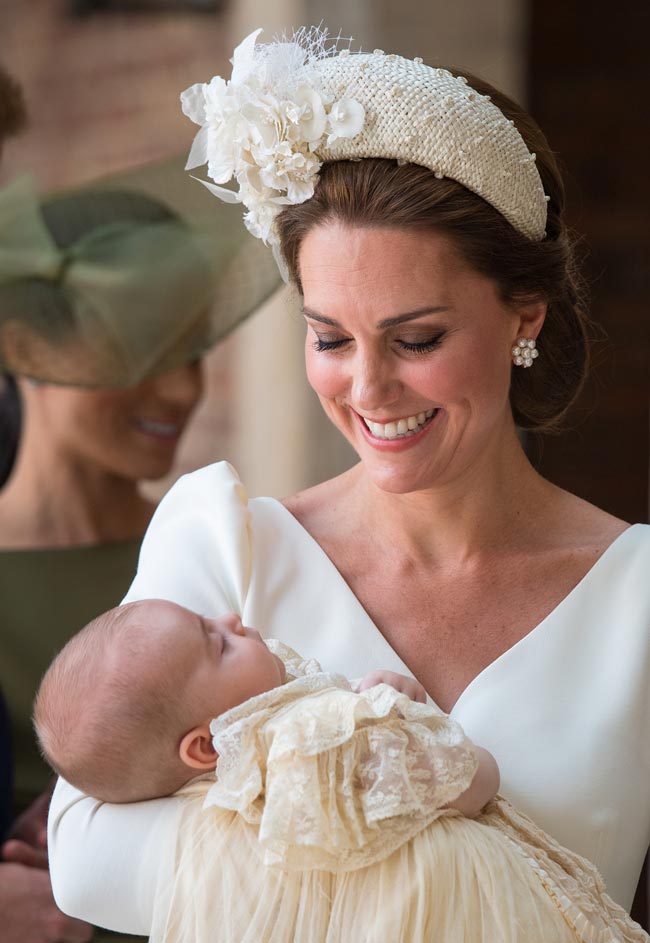 The Royal Family came out in full force on Monday for yet another celebratory event. (They’re just all over the news this year, aren’t they?) This time around, though, instead of wedding bouquets or outlandish Ascot hats, the House of Windsor were on hand to witness the christening of Prince William and the Duchess of Cambridge’s son, Prince Louis. (Well, minus Her Majesty and Prince Philip who both decided not to attend due to a busy week of royal duties, which includes hosting U.S. President Donald Trump on Friday.)

The 40-minute service took place at The Chapel Royal at St. James’s Palace — the same venue at which Meghan, Duchess of Sussex, had her private baptism in the months leading up to her wedding to Prince Harry.

A beaming Kate looked stunning (with a capital “S”) as she arrived at the chapel cradling her youngest while wearing a crisp white Alexander McQueen dress and hat by Jane Taylor. Meanwhile, William led Prince George, almost 5, and Princess Charlotte, 3, by the hand to their seats alongside Prince Charles and Camilla, Duchess of Cornwall, Kate’s parents, Carole and Michael Middleton, and Harry and Meghan. Kate’s pregnant sister Pippa — who is due in October — arrived in advance with her husband, James Matthews.

It’s been nearly two months since the little prince was born and there’s been nary a sighting of him since we caught our first brief glimpses on the steps of the Lindo Wing of St. Mary’s Hospital in London and a portrait of him and big sister, Charlotte, sharing a sweet moment together. But that’s to be expected — after all, Kate did specifically take time off from her royal duties to spend some quiet time out of the limelight with the newest addition to her adorable family.

But we’d be lying if we didn’t admit that we’ve been looking forward to seeing the Cambridge’s all together in one room as a family of five.

Much like his siblings, wee Louis wore the official Royal Christening Robe which is steeped in rich historical significance — the gown is a replica (made by Angela Kelly, Dressmaker to the Queen) of one made specially for Queen Victoria’s eldest daughter, Victoria, Princess Royal, in 1841 — and Louis could not have looked more adorable in it. The original gown, made of Honiton lace and white satin, was used in royal christenings until 2004 until it was deemed too delicate to be worn.

Unlike the majority of christenings we commoners are more accustomed to, little Louis had, not one, not two, but six godparents. (Go ahead and count ’em.)

Will and Kate asked the following friends and family to stand as godparents to the fifth-in-line to the throne:

Following the service, Will and Kate hosted a private tea at Clarence House, home of Charles and Camilla, where guests enjoyed slices of their leftover wedding fruit cake. Designed by renowned baker Fiona Cairns, the lavish eight-tier confection originally created for Will and Kate’s April 2011 nuptials had certain parts reserved specifically for the christenings of the couples’ children, an age-old royal tradition.

This is still our favourite photo of the little prince. To mark the birth of Louis and to help celebrate his big sister Charlotte’s third birthday, William and Kate shared this adorable portrait of the siblings on May 5.

Still thinking about the Royal Wedding? Subscribe to any of Zoomer‘s information-packed newsletters and get exclusive access to Celebrating Royals in Love — our digital keepsake edition — with more than 100 pages of specially-curated photos and stories. Sign up HERE today!