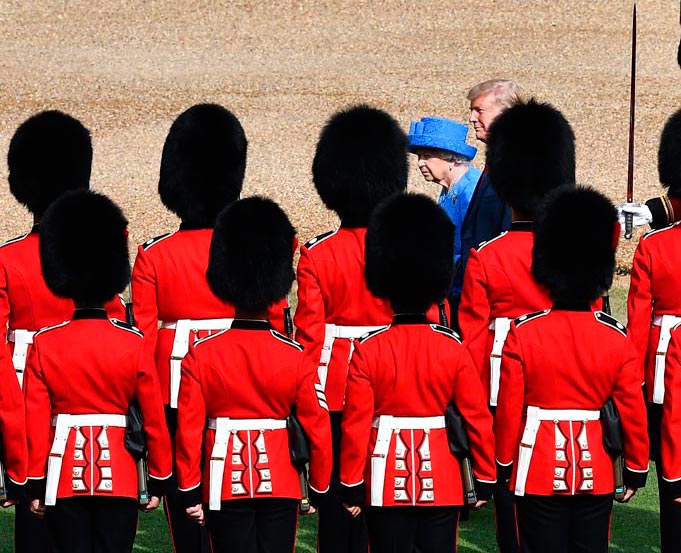 On July 13 (Friday the 13th, no less), bombastic U.S. President Donald Trump and First Lady Melania Trump met with Queen Elizabeth for a spot of tea at Windsor Castle. (Talk about polar opposites! Oh, to have been a fly on the wall during that conversation.)

But the friendly tête-à-tête (which occurred behind closed doors) was overshadowed by Trump’s apparent tardiness. Yes, the Commander-in-Chief and his missus kept the 92-year-old monarch waiting — standing beneath a tent in front of the military personnel assembled before her.

On the second day of his four-day working visit to the U.K. — which has already been a whirlwind of meetings, black-tie dinners and giant Trump Baby balloons — the president was reportedly in good spirits about meeting the Queen, calling her a “tremendous woman.”

But the minutes ticked by. Her Majesty still managed to look as regal (and patient) as ever in a blue damask coat and matching hat. Standing quietly beneath the tent, she even stole a quick glance down at her wristwatch to check the time.

As CNN’s royal correspondent Max Foster pointed out, “The Queen is waiting, which you don’t often see.”

Finally, a black Range Rover pulled onto the grounds and up to the tent shielding the Queen from the sun’s glare.

Despite the delay, the Queen greeted the Trumps with a warm smile and handshakes at the dais in the quadrangle of the Castle while a Guard of Honour gave a Royal Salute and played the U.K. and U.S. national anthems.

Fresh off their black-tie dinner hosted by Prime Minister Theresa May at Blenheim Palace the previous evening (more on that in a bit), Mr. and Mrs. Trump looked rigid and somewhat distracted. Not surprising, given that at the exact moment the couple were posing for photos with the Queen, the office of Special Counsel Robert Mueller was announcing that 12 Russians and three Russian entities had been indicted by a federal grand jury in Washington, D.C., for hacking the Democrats in 2016.

Perhaps that’s what was on Trump’s mind as he, at times, wandered somewhat aimlessly when inspecting the troops — leaving the Queen to politely gesture at places for him to walk and stand.

This is Trump’s first visit to the U.K. since becoming president. Earlier this year, he abruptly cancelled a scheduled trip to London, at the Queen’s invitation, casting blame on the Obama administration’s decision to sell the original American Embassy in London for “peanuts.” (Although, we should point out, it was actually the Bush administration that made the original call.)

But it would appear that bygones are bygones. It’s worth noting that, in her 66 years on the throne, the 92-year-old monarch has invited only three other American presidents to Windsor Castle:

Ronald Reagan in 1982 (the pair went horseback riding together)

In total, Her Majesty has met 11 out of 12 presidents during her lengthy reign (Lyndon B. Johnson was the only president she never got the chance to meet).

In the past, Trump has claimed his Scottish-born mother, Mary Anne MacLeod, who died in 2000, loved the Royal Family.

“Any time the Queen was on television, an event, my mother would be watching. Crazy, right?” Trump told London’s The Times. “She loved the Queen … she was so proud of the Queen. She loved the ceremonial and the beauty because nobody does that like the English.”

Tea saucers aside, Trump also spent part of the day doing damage control by refuting an interview he gave to The Sun on Thursday ahead of his scheduled dinner with PM Theresa May. According to the controversial interview, Trump told a Sun reporter, “I actually told Theresa May how to do it [Brexit], but she didn’t listen to me … she wanted to go a different route” and “I think the deal is not what people voted for” before stating that May “wrecked it.”

Trump, who dismissed the Sun story as “fake news,” told reporters ahead of his meeting with the Queen, “The only thing I ask of Theresa is that we make sure we can trade, that we don’t have any restrictions, because we want to trade with the U.K. and the U.K. wants to trade with us.”

Trump said he apologized to May for the interview, although it would appear his apology was more about the paper’s omission of his comments praising her — not his actual criticism.

“When I saw her, I said, ‘I want to apologize because I said such good things about you.'”

Although we’ll never truly know what the Queen thought of her meeting with Trump, it no doubt brought to mind last month’s mini debacle involving Meghan, the Duchess of Sussex’s father.

In June, Meghan’s father, Thomas, told Good Morning Britain that, despite not having met in person, he and Prince Harry had spoken on the phone. Naturally, the exclusive interview went viral — and likely caused the newly minted Duchess of Sussex (not to mention the entire Royal Family) a wee bit of embarrassment.

According to Thomas Markle, he and Harry chatted briefly about the divisive U.S. president. “Our conversation was I was complaining about not liking Donald Trump. He said ‘Give Donald Trump a chance.’ I sort of disagreed with that.”

The statement was, to say the least, highly controversial — not to mention inappropriate. Members of the Royal Family are famously careful not to comment on domestic or international affairs, preferring to remain neutral.

Mass protests (in the tens of thousands) continued in London on Friday while Trump was rubbing elbows with royalty. Last week, the city’s mayor, Sadiq Khan, gave his approval of a six-metre-high “Trump Baby” balloon to be flown close to Parliament during the president’s visit. No doubt we’ll hear Trump’s opinion on the protests — and perhaps even his meeting with the Queen — when he undoubtedly takes to Twitter and unleashes a flurry of tweets.