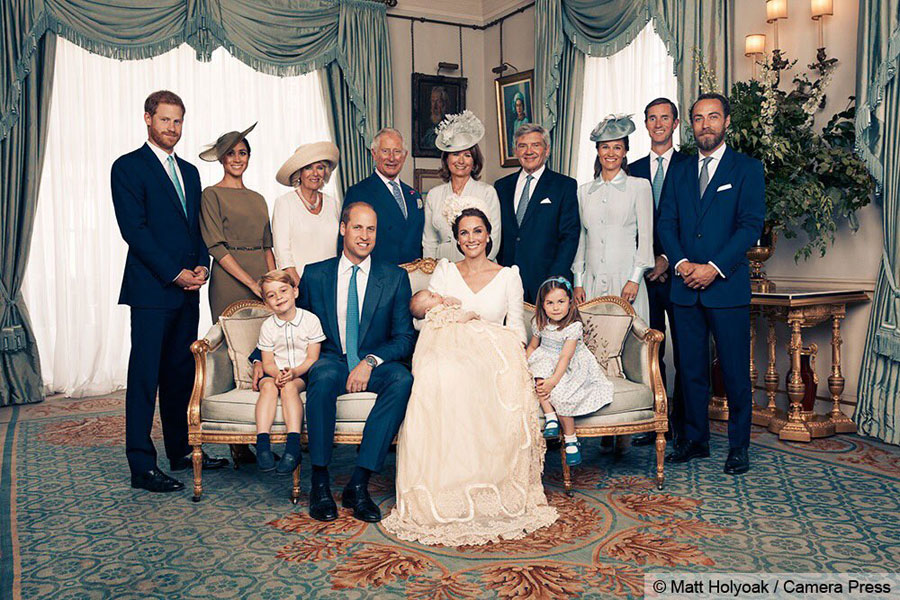 It was just last week that we finally caught another glimpse of Prince Louis, this time during his christening at St. James’s Palace on July 9.

It had been awhile since we’d last seen the little prince on the steps of the Lindo Wing of St. Mary’s Hospital in London and in a portrait of him and big sister, Charlotte, sharing a sweet moment together.

Although wee Louis appeared to have slept in the Duchess of Cambridge’s arms throughout the majority of his 40-minute christening service, he’s wide awake and oh-so-adorable in the official christening portraits that were released by Kensington Palace on Sunday.

Prince William and Kate also posed in the Morning Room at Clarence House, home of Prince Charles and Camilla, Duchess of Cornwall, for a series of portraits that included extended relatives — and this gem featuring newlyweds Prince Harry and Meghan, Duchess of Sussex.

The fifth-in-line to the throne looked peaceful in Kate’s arms in all four portraits, while the typically shy and reserved Prince George had a big smile on his face. Little Princess Charlotte is seen glancing over at her new little brother — you have to wonder how she’s handling her new Big Sis duties.

Wearing a stunning cream Alexander McQueen ensemble for her youngest’s big day, Kate was perfectly coordinated with the little prince. Louis wore the Royal Family’s replica heirloom christening gown made from Honiton lace. The gown is based off the one Queen Victoria had made for her daughter’s christening in 1841.

Then, of course, there’s the first official portrait of the Cambridge’s as a family of five — and it’s beautiful!

Noticeably absent are Queen Elizabeth and Prince Philip, who reportedly made a joint decision with William and Kate not to attend the service as they were travelling back from Sandringham ahead of a busy week, which included Her Majesty’s controversial meeting with visiting U.S. President Donald Trump.

Kensington Palace also released one final candid shot from the christening — and it’s definitely our favourite. Look at that gummy smile!

The Twitter post read: “The Duke and Duchess hope that everyone enjoys this lovely photograph of Prince Louis as much as they do.”