You Spin Me Right Round, Baby: Why Vinyl Is Back to Stay 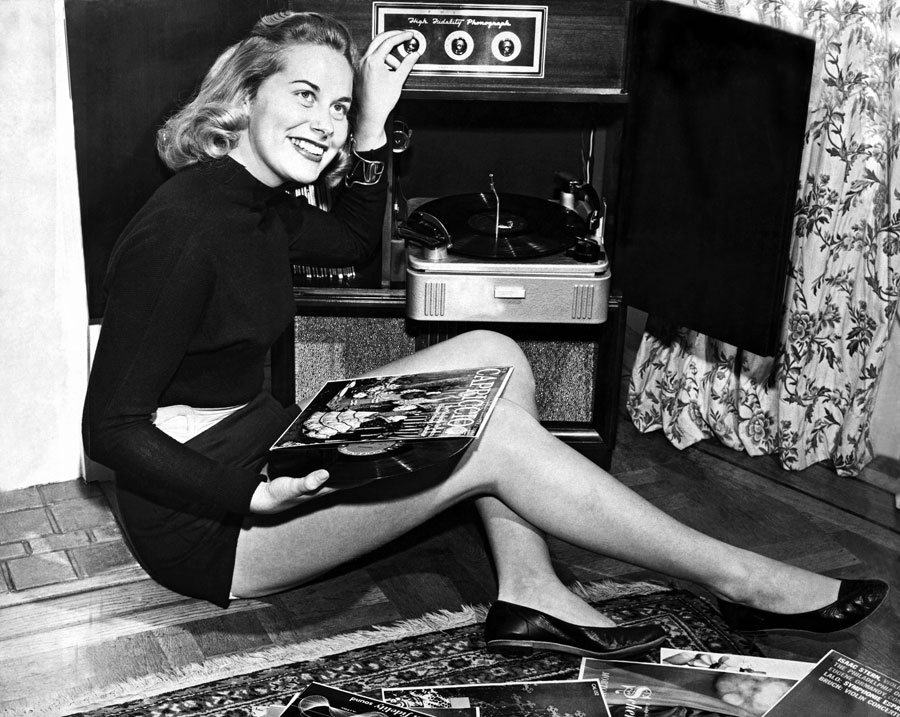 Time to dust off the turntable. Vinyl is back and, as Rebecca Field Jager discovers, it’s about more than just nostalgia.

As anyone who came of age in the ’60s or ’70s knows, coolness was defined in large part by the size and scope of your album collection. Sadly, I was never part of the cool club, but with vinyl sales continuing to soar in recent years, it looks like I may have a second chance.

From the get-go, I’ve always been vinylly challenged, my collection forever too sparse, too pop or too yesterday.

Flashback to the summer of ’75: I’ve just turned 13, and my family is visiting relatives. My cousins, all of whom are older and most of whom are male, are pretty much stuck with me, and so I actually get to hang out and listen to music with them. We’re all draped over the furniture with dozens of albums scattered across the floor. For the most part, no one says anything, but once in a while someone grunts out a comment about some band or musician I’ve never heard of and so, wanting to add my own two cents, I scan the sea of records for something familiar hoping to find at least one of the few LPs I own.
There’s nary a Beach Boys album in sight.

Rather than just sitting there staring into space, which, frankly, to be part of this glassy-eyed gang is exactly what I should have done, I pick up the empty jacket of the LP that’s playing and feign interest in its image of nude children climbing a pile of rocks. “What’s your favourite Zeppelin song, Becky?” one of the boys asks out of the blue. Is he challenging me? Can he see through my ruse?

All I have to do is flip the cover over and pick a song title at random but, instead, I say, “Uh … this one,” and then, as if to prove it, stand up and actually start bopping about, trying to sing along. Thank God the lyrics weren’t rocket science. Oh, oh, oh, oh, oh, oh, you don’t have to go, oh, oh, oh, oh, oh …
Canadian Music Industry Hall of Famer Ralph James tells a much different story from mine. When he talks about hanging out in Winnipeg record stores back in the ’60s, his voice takes on a warmth and authenticity as nostalgic as the sound of vinyl itself.

“They had play copies so you could listen to the stuff and you couldn’t wait for those copies to come out,” the former bass guitarist for Harlequin and executive vice-president, director for the newly launched Canadian offices of Agency of Performing Arts (APA), a worldwide talent agency, which reps the likes of Nickelback and Billy Talent, enthuses. “Some of them were full double albums with pictures, lyric sheets, credits and everything. It’s part of the reason a whole bunch of people I know got hooked on music – it wasn’t just the music, it was the artwork, the album covers and everything.”
Wow, I coo, but of course I can’t really relate. I’m even more lost when he talks about the 100 or so albums he saved from his collection, which, back in the day, numbered close to 5,000. “I have the Rolling Stones 12 X 5 on Decca, mono. It’s about an eighth of an inch thick.”

More empty cooing from me, and I find myself wishing that coolness were contagious and I could reach through the phone line and touch him – surely then, some of it would rub off on me. But, no, I need to look into this vinyl thing further.

Vinyl, experts say, is not only making a comeback but is a format that is here to stay. But is it? I mean, I can’t go through another format fiasco like when all those now-grown-up cool kids were kicking their album collections to the curb, and I was smugly patting my shoebox of cassettes. And then my shoebox of CDs. And then … do MP3s fit in a shoebox?

In her recently released book, Why Vinyl Matters: A Manifesto From Musicians and Fans, Jennifer Otter Bickerdike tracks the rise, fall and resurgence of vinyl. She cites the early 2000s with the introduction of MP3s as a lamentable time in history when the album cover, already shrunk to CD size, was further reduced on tiny mobile screens. “Music had become completely untethered from a physical commodity, lacking the emotional ties and cultural symbolism formerly provided by the comprehensive package,” she writes.

Early in 2017, Sunrise Records announced plans to take over 70 former HMV stores across Canada, most with around 25 per cent of vinyl inventory. And also early in 2017, Gerry McGhee, president of Isotope, a music distributor, opened Precision Record Pressing, a 20,000-square-foot record-pressing plant in Burlington, Ont., that, once running at full capacity, is set to become the second largest vinyl plant in North America. McGhee, like James, is a former rocker (lead singer of Brighton Rock) who even sitting behind a corporate desk at his head office drips cool. The more he reminisces about his vinyl voyage, the more I realize I missed the boat. “My older brother owned a record store in Hamilton in 1977, so I went to work there when I was 14. All we had back then was music and movie theatres.” Gawd, I think, all I had was books and babysitting.

Theories abound. The rise of vinyl coincides with Record Store Day, an international phenomenon, which launched in 2008. To hipsters, it helped introduce a brand new shopping experience and to boomers one that is nostalgic and tried-and-true.

Of course, the growing selection of LPs helps – in fact, according to James, practically every band or musician wants to release on vinyl. “It’s the artwork alone. They see other bands doing it, and they want to do it, it’s just so cool,” he says.

Online or in a record store, then, today vinyl fans can purchase everything from indies to giants, from younger artists like Bieber to the back catalogues of The Doors. Globally, sales have reached a reported 25-year high and, here in Canada, according to Nielsen Entertainment, sales have shown double-digit percentage increases every year since 2012 and were up 29 per cent in 2016 over 2015.

The top-10 selling vinyl albums in Canada in 2016 included a mix of the present and past from The Lumineers Cleopatra (2016) to The Beatles Abbey Road (1969). Among the top sellers, too, were Adele and Amy Whitehouse contemporary yet old-school crooners who, to me, perfectly reflect vinyl with all its beautifully scarred pops and scratches as opposed to the loss of soul found in the clinical perfection of the newer formats. Sandwiched between Bob Marley and The Wailers’ Legend and The Tragically Hip’s Man Machine Poem is the No. 2 bestseller, Blackstar, the late great David Bowie’s final album. Not surprisingly, the recent deaths of legends such as Bowie and Prince are also credited with fuelling vinyl demand as sentimental consumers seek to experience the music on the format on which it was originally released.

During a recent Skype interview, Bickerdike raved to me about the sheer beauty of vinyl’s tangibility. “Vinyl is a physical manifestation of music, something you can touch and feel and interact with using senses beyond just your ears. There is a simplistic joy in the ritual of putting on a record that, no, you can’t walk around with. You have to be in the same room, stop and listen. You have to sit and listen to a record.”

The sensory experience of vinyl can help to evoke fond memories of days gone by, says Eva Fisher, a clinical psychologist based in Ottawa. The simple act of pulling a beloved album out of the cover and placing it on your record player can call up a string of other happy memories. “Happy recollections unexpectedly experienced is a big dopamine enhancer,” says Fisher, suggesting that if the song and the way it sounds on vinyl takes you back to your first dance, your first kiss, your first time, the emotions will be even stronger and easier to relive.

This brings me back to a few years ago when my mom was selling the family home, and I was helping to clear things out. Next to the big old console, for years the household’s sole sound system and long since relegated to the basement, was a pile of LPs, mostly my late dad’s. But there amid Andy Williams and Doris Day were my paltry few and, I’m proud to say, Meatloaf’s Bat Out of Hell was among them.

Just picking it up, I experienced a rush of pleasure as I flashed back to the summer of ’78 and slow dancing with my boyfriend. We must have changed the words slightly – I want you, I need you, But there ain’t no way I’m ever gonna love you – for we were each other’s first love. Sweet, I know, but let me rip the needle off of that memory. Just picking up that album, I remembered the question-mark ridden lyrics of that other hit and was awash with anxiety.
Do you love me? Will you love me forever? Do you need me? Will you never leave me?

Never mind the album, my head spins just thinking about it. Still, methinks I’m going to go out and buy a turntable. And although I won’t plaster my bedroom with posters or have milk crates lining the floor, this time I’m going to get the vinyl thing right. Rebecca remastered.