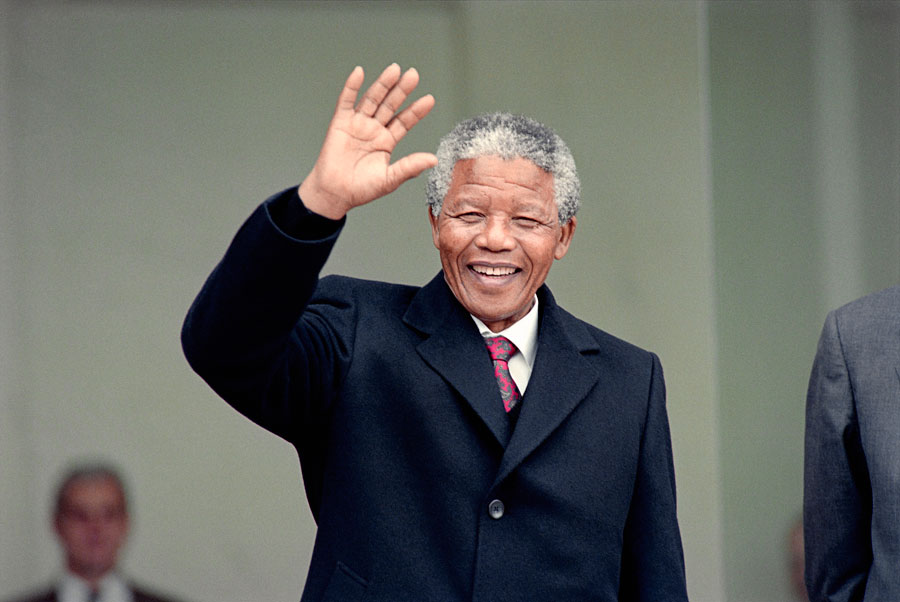 Nelson Mandela waves to the press as he arrives at the Elysee Palace, June 7, 1990, in Paris, to have talks with French president Francois Mitterrand. Photo: Michel Clement, Daniel Janin/AFP/Getty Images.

Nelson Mandela, an internationally celebrated symbol for human rights and the successful struggle against South Africa’s apartheid system, would have turned 100 on Wednesday.

In recognition of his life’s work and activism, the Canadian Museum for Human Rights in Winnipeg is featuring the exhibit Mandela: Struggle for Freedom, which runs until Jan. 6, 2019. In 1998, Mandela was the first foreign leader to be awarded the Order of Canada.

The exhibit holds up a microscope to both Mandela, the man, and the movement that formed around him. It also offers patrons a unique experience, allowing you to enter a replica of the prison cell that was his home for 18 years. As described in the press release, you can, “experience the bittersweet joy of his release, after 27 long years of imprisonment [and] witness South Africa’s first democratic elections, and find out about Mandela’s efforts to rebuild a nation shattered by racism and injustice.”

You can also: “Hear from Canadians who joined the struggle for freedom and equality and see for yourself the importance of mobilizing and speaking out.”

After an extraordinary life, the Nobel Prize winner passed away on December 5, 2013 at the age of 95.

Mandela — who was born a Xhosa in the Thembu royal family — was educated as a lawyer before joining the African National Congress (ANC) to fight against the government’s nationalists.

In 1948, when South Africa’s National Party came to power, its all-white government enforced policies of racial segregation. In protest, Mandela led peaceful marches, before moving his focus to militancy and bombings in the early 1960s — which ultimately led to his life sentence in prison in 1962.

His ongoing imprisonment became the focus of an international campaign for his release until he finally walked free on February 2, 1990.

Only four years later, Mandela was elected president of South Africa in May 1994 and spent more than five years in office before stepping down in 1999.

Mandela: Struggle for Freedom pays tribute to his courage and proves his place as one of history’s most inspiring political figures.

Mandela: Struggle for Freedom is featured at the Canadian Museum for Human Rights from June 8, 2018 to January 6, 2019. Visit the Museum to see the full exhibition.