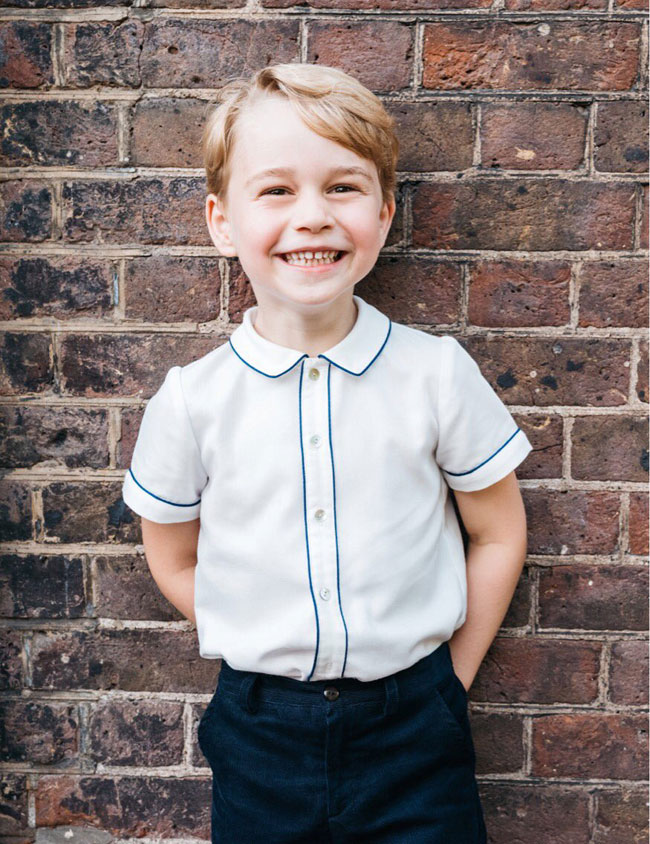 The royal, who turned five on Sunday, has had an especially hectic summer — from standing in as page boy during Prince Harry and Meghan, the Duchess of Sussex’s Royal Wedding to meeting his new baby brother, Prince Louis.

But today is all about George — and those adorable knee-length shorts. (Why always shorts, you ask? “It’s a very English thing to dress a young boy in shorts,” etiquette expert William Hanson told Harper’s Bazaar. “Trousers are for older boys and men.” Well, now we know.)

The famously shy prince — who’s not quite as outgoing and spirited as his little sister, three-year-old Princess Charlotte — no doubt got to indulge in some of his favourite hobbies and treats, courtesy of Prince William and the Duchess of Cambridge.

And, in keeping with tradition, Kensington Palace has released a new portrait (photographed by Matt Porteous) of little George to mark his birthday milestone. It has become something of a tradition for the Cambridge kids — every year on their birthdays they pose for the camera in their finest little outfits and the world simultaneously gushes over them. (Who could resist?)

Prince George Alexander Louis was born in the Lindo Wing of St. Mary’s Hospital in London at 4:24 p.m. (Western European Time) on July 22, 2013. Third in line to the throne, George’s birth was heralded as that of a future king. There were multiple 21-gun salutes in the capitals of Canada, New Zealand and Bermuda, among others, and the bells of Westminster Abbey were rung.

Since then, George has delighted royal watchers with his charming antics — and even the occasional temper tantrum. Whether he’s upstaging his dad during a charity polo match or excitedly watching jets fly over Buckingham Palace during the Trooping of the Colour, George manages to capture more global headlines than most members of his family.

So, in honour of his fifth birthday, we take a little trip down memory lane.

Prince George made his public debut on July 23, 2013, the day after his birth. (How adorable is that little bundle of joy?)

For George’s first birthday, the Duke and Duchess treated their toddler to a day at London’s Natural History Museum to see the butterflies.

For his second birthday, the Duchess of Cambridge snapped this gorgeous candid moment shared between father and son. It also marked the beginning of Kate’s annual tradition of taking her own birthday portraits of her tots.

For George’s third birthday, the Duchess continued to indulge her passion for photography with this sweet photo.

Last year, for his fourth birthday, the Cambridge’s released this gem of Prince George grinning from ear-to-ear. No doubt he got a good spoiling on his birthday. A new toy fire truck, perhaps?