A Dame, a Duchess and One Unco-operative Vanilla Ice Cream Cone 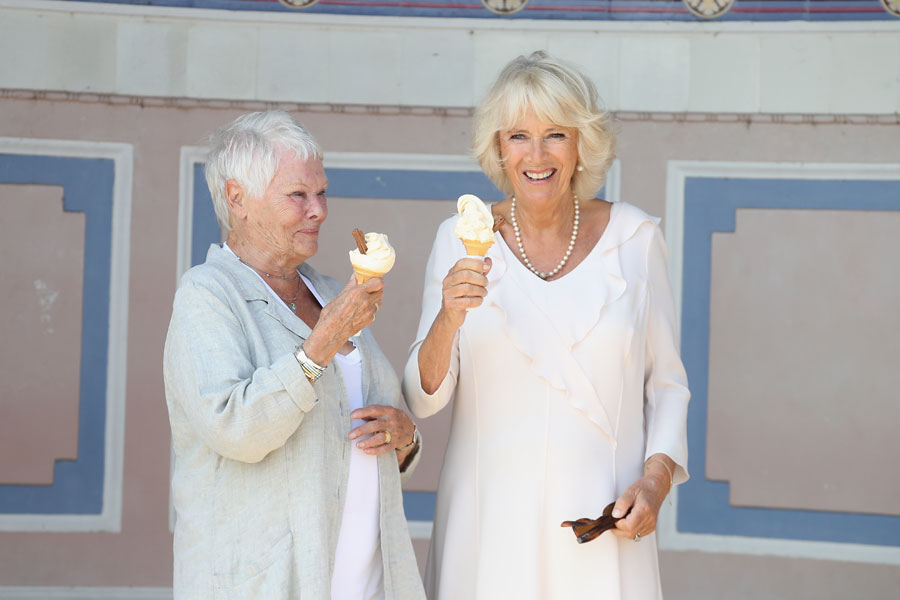 Camilla, the Duchess of Cornwall had something of a royal mess on her hands during her Tuesday visit to the Isle of Wight with actress Dame Judi Dench.

No, she wasn’t caught up in a tabloid scandal, nor did she commit a fashion faux pas. Instead, Camilla waged a losing battle with a particularly unco-operative vanilla ice cream cone.

The Duchess and the Dame were spotted enjoying each others’ company at Queen Victoria’s former holiday home, Osborne House, when the charming moment occurred. Dench, who is a patron of the Friends of Osborne House and has played the monarch twice (in Mrs. Brown and Victoria and Abdul), warmly welcomed Camilla as she arrived at the property’s private beach. And what’s a visit to the beach without a little ice-cold treat?

The duo kept cool in the 75-degree heat with identical vanilla ice cream cones (complete with a Cadbury Flake) — although Camilla appeared to have a bit of trouble keeping hers from melting.

The Oscar-winning thespian, 83, was snapped offering a napkin to Camilla as ice cream dribbled down her chin and onto her hands. (Celebrities, they’re just like us, am I right?) At least the Duchess was already wearing white and seemed to have a good sense of humour about the situation.

While the ice cream was no doubt a welcome respite from the heat, Camilla was overheard saying what she really wanted was to go for a swim. “The temptation is great to have a quick dip like the Queen did,” she said.

Dench also gave Camilla a tour of the estate, including the recently restored Durbar Room, one of the filming locations for Victoria and Abdul.

There’s also a neat little personal connection for the Duchess. Osborne House, which was completed in 1851, was designed by architect Thomas Cubitt, who also happens to be Camilla’s great-great grandfather.

The pair also rode together for a horse and carriage, with Camilla seated up front while Dench greeted the gathering crowds from the back seat.

The Dame and the Duchess go way back: the duo having spent time together at various soirees over the years, including an event marking the 400th anniversary of Shakespeare’s death in 2016 and the world premiere of The Second Best Exotic Marigold Hotel in 2015.

Dench was first recognized Queen Elizabeth with the Officer of the Most Excellent Order of the British Empire back in 1970 and was later made a Dame Commander in 1988.