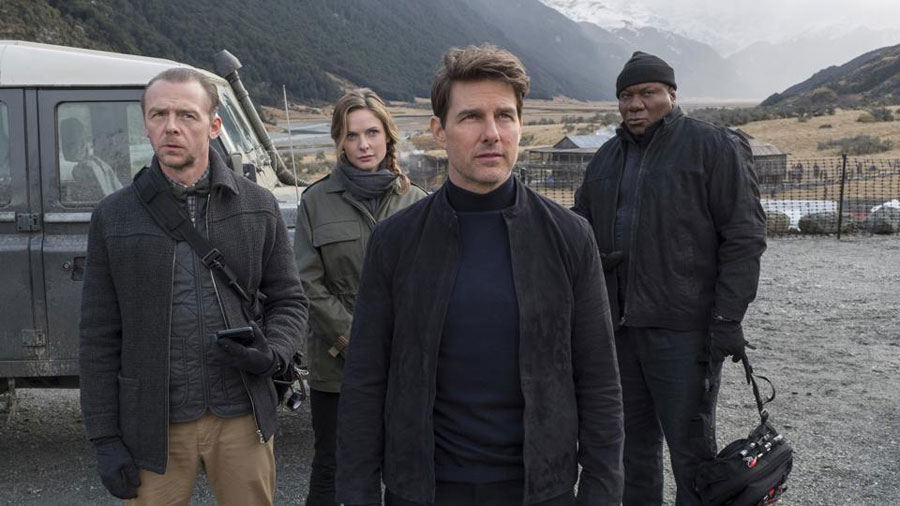 Tom Cruise in a scene from "Mission: Impossible — Fallout." Photo via Paramount Pictures.

Age is a sensitive thing for an action star like Tom Cruise.

In last year’s The Mummy, during a fight sequence with Russell Crowe, Cruise listened as Crowe uttered the words, “You’re a younger man, but it would be foolish to underestimate a man like me.”

Thing is, Cruise is 56 years old. Crowe is 54. That line of dialogue was the verbal equivalent of a comb-over on a balding guy.

Both men are Baby Boomers (Crowe by one year) according to the people who decide this sort of thing — the Pew Research Center, which defines its job as collating “numbers, facts and trends shaping your world.”

I’m not sure if it was Pew that moved the goalposts on me — the organization claims that the oldest Gen-Xer turns 53 this year — but ever since the term was first coined, I’ve considered myself to be Gen-X. I was 18 when Billy Idol formed the punk band Generation X, and fellow Canadian Douglas Coupland — who wrote the book Generation X to define his own generation — is 56, and therefore also, by definition, a Boomer.

What complicates things is the shaky expectation of what a Boomer (or a Gen-Xer or a Millennial, for that matter) is supposed to be. Cruise, despite plenty of professional advice to the contrary, still insists on doing his own stunts, as he did in the recently released Mission: Impossible — Fallout.

That movie — which most critics and audiences agree is terrifically action-packed — had to halt production for a while when Cruise broke his ankle making a stunt jump. (Ever the trouper, he finished filming the scene and it actually made it into the movie — in fact, it’s the scene everyone waits for.)

By comparison, Wilford Brimley was 51 when he played the “old guy” (he always played an “old guy”) in Ron Howard’s Cocoon. Now, there was an actor who knew how to age gracefully.

And then there was Danny Glover, who played the always about-to-retire Roger Murtaugh in the Lethal Weapon movies opposite Mel Gibson. He was 41 years old when he uttered the immortal onscreen words, “I’m too old for this sh*t!” Heck, today, that would make him just four years shy of being a Millennial.

We’ve seen age take a toll on our favourite rock stars. It goes without saying that it has done the same with our action stars. Sylvester Stallone has been called out on his use of Human Growth Hormone (and was even arrested in Australia for bringing it into the country). It’ll be hard to watch 71-year-old Arnold Schwarzenegger in another Terminator movie (yes, it’s listed as filming now) without thinking about how creaky those T-800 model Terminators are starting to look.

In their wake is Dwayne “The Rock” Johnson, a Gen-Xer at age 46, who has starred in five movies in the past year — none of them good, mind you, but all of them full of noisy stunts.

Of course, in the world of real action stars — i.e. professional athletes — The Rock would be past his prime (as is his agent character, a former NFL player, in HBO’s Ballers).

But there’s something about the movies these days that rejects younger people as action stars. Many millions of dollars were spent in the last few years because studios were convinced that Canadian actor Taylor Kitsch (of TV’s Friday Night Lights) had what it took to outrun explosions. The results were John Carter and Battleship, two box office bombs starring Kitsch and nine-figure budgets.

On the upside for those waiting to see a Millennial action star, they are now almost old enough to qualify. Pew reports that the oldest Millennial would be 37 years old — coincidentally the same age Kitsch is now.

Admit it, you take a bit of pleasure in knowing that those smart-ass Millennials are getting to the age where they should have their prostates checked.

But here’s another tidbit about our shifting demographics. As of 2019, Millennials in North America are expected to outnumber Boomers for the first time. (Pity the poor minority Gen Xers, who won’t outnumber the Boomers until 2028 at the earliest, by which time, we’ll have little to do but shake our fists at each other. Demographics are funny that way.)

This is as it should be, of course — and about time, too. This is the Millennials’ world and culture (with a cohort of Gen-Ys coming up behind them who’ll blame them for everything). There is already a cultural schism setting in that hasn’t existed for half a century, a time during which all 14-year-old boys, including my own, listen to Led Zeppelin.

In much the same way I didn’t care about The Ink Spots (of my parents’ generation), I now don’t care about YouTube celebrities — and even they have but their moment in the sun. Former YouTube star Bo Burnham, 27, recently made his directorial debut with the touching movie Eighth Grade, and spoke in several interviews about being conscious of aging past the demo of his YouTube viewers.

Of course, when a 27-year-old talks about aging, I worry that my eyes will stay locked in a rolled-back position.

But that’s how it is. It’s their turn now. Long may Tom Cruise run and jump. But if that next break is a hip, I suggest he become a character actor.