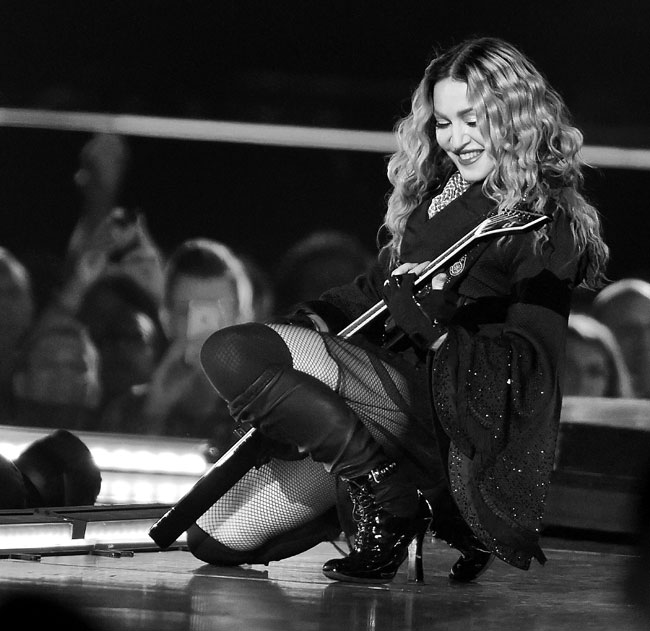 Here’s what I wonder about Madonna: Does she lie awake at night and agonize like the rest of us? Does she count her loves and losses and fret about her kids’ schooling? Do any of the particularly nasty jeers she has attracted during her 35 years in the spotlight get stuck in her craw?

Madonna is ever-ready to give haters her middle finger.

Madonna Louise Ciccone was born Aug. 16, 1958 in Bay City, Michigan — and that is the one thing she cannot will away. And thus, the only criticism that seems to get under Madonna’s skin is her age. But she can, and is, reinventing the number — for herself and for women everywhere.

Thus far, the art emerging out of her aging is a work in progress. In one breath, she is baiting her Instagram followers, “Shut up jealous bitches! I hope you are as fun-loving and adventurous as me when you are my age!” The next, she is trying on indignant.

Her latest persona — social justice Madonna — emerged two years ago during her acceptance speech for Woman of the Year at the Billboard Music Awards. She summoned the furies to decry the fate of aging women in entertainment: “And finally, do not age, because to age is a sin. You will be criticized, you will be vilified and you will definitely not be played on the radio.”

She pissed off the likes of Camille Paglia in the process; the feminist contrarian published a huffy piece in response in The Hollywood Reporter last year. In it, Paglia admonished Madonna (and J.Lo, for good measure), to grow old with graceful elegance, in the fashion of Lena Horne, Judi Dench or Helen Mirren.

But Madonna is our premier cultural pioneer, trailblazer and lightning rod, and she has owned dozens of identities so fear not she will master this challenge. Each carefully crafted image is fully inhabited, and lit from within by her ridiculous amount of star power and charisma.

She burst out of the screen in her early videos (a genre she helped invent) with “Holiday” in 1983. Think “Borderline” and “Lucky Star” and rubber bangle bracelets and a tattered baby doll dress under a motorcycle jacket. The fingerless lace gloves! The fishnets! She has dragged multiple generations onto the dance floor with her heady combination of catchy grooves and irreverent style.

Madonna was the soundtrack for my own real first kiss, in the back of a Dodge Dart, to the pulsing, yearning soundtrack of Crazy for You. She led the way for us all: She said what she pleased, she did what she pleased. Two of her lifelong mottos are: Never apologize and invade your own privacy.

She did just that, digging into her own biography to mine the pain and turn it into art. Thus we saw flashes of her losing her mother at age five, railing against the suffocating joint forces that conspired to hold her down — a Catholic upbringing and a strict stepmother.

A drop-out from the University of Michigan, young Madonna abandoned her formal dance studies to live as what is almost always described as a “street urchin” in the underground punk scene in New York, honing her inner beast and getting her demos in the hands of star-makers. That character was made indelible flesh onscreen in 1985’s Desperately Seeking Susan, a mashup of punk and pluck and perfectly emblematic of the moment.

It wasn’t just juvenilia, her early work has stood the test of time. You could play it any club anywhere and people would dance. Then we had the dizzying iterations of “Material Girl”, including “Like a Prayer” in 1989 (where she drew the ire of Pope John Paul II for her video in which she is attempting to seduce a black Jesus).

Next up was the genesis of Maverick Records, wherein she took control of her own art and future. There was the volatile marriage to Hollywood bad boy Sean Penn, and the movie roles good (Evita), campy (Dick Tracy) and the turkeys (Swept Away). There was the Sex book (1992), where she was again attacked by feminists. Her memorable and succinct response was, “I’m in charge of my fantasies.”

Whiplash turnabout and she was suddenly a proud and visible single mother (Lourdes was born in 1995, product of a brief union with her trainer, Carlos Leon). Then she became the ladylike wife of British director Guy Ritchie, with whom she shares a son, Rocco (born in 2000), whereupon she was beat up anew by the voracious British tabloid press when she moved there and took up Kabbalah and yoga — and a questionable English accent.

There was her mystical-infused album Ray of Light in 1998. Then her electronica driven series Music, Celebration, MDNA. She kept up with the flow of music, and has never been accused of taking a bloated greatest hit tour on the road.

Around the 2016 election she raised her voice on behalf of Hillary Clinton, then retreated to Portugal with her brood, where she is now ostensibly, and certainly temporarily, a soccer mom. She adopted son David Banda (who is a soccer player in Lisbon), then daughter Mercy James, and then last year adding four-year-old twins Estere and Stella to the family. The adoptions, all from Malawi, were accompanied by varying degrees of sound and fury.

Madonna has been heavily criticized for her plastic surgery — her face was once dissected by a surgeon’s pen on the cover of New York Magazine, an article within about how she has driven the cheek filler market and created a new face proportion. Get that? She invented a face!

She has been oft-cited for her feuds, most often with women. Though to be honest, she does fan the flames herself. She counts Lady Gaga, Gwyneth Paltrow and Mariah Carey as her top “frenemies.”

But it is the numbers that matter. If Madonna wants to wear duct tape on her boobs at the Met Ball, or flash her 60-year-old arse at the cameras, she has earned the right to her place in that conversation. So say her 45 No. 1 hit singles, her 300 million albums sold worldwide, her 273 awards and counting. Oh, and her estimated $500 million fortune.

Madonna has been interviewed thousands of times. She tends to toy with her chroniclers like a particularly perverse cat. Unsurprisingly, one exception is an archival interview with Oprah, an outsized personality and artist herself who can empathize with what it must be like to be so famous, and such a significant a part of culture-shaping.

In it, Madonna talks about her job, which she describes as conquering her fears. She admits to insecurities, as a woman, about her body (she worries her legs are fat), and as a performer. But when asked what truly scares her, Madonna says: “Ignorance. Losing loved ones. Running out of creative ideas.”

So there we have our answer, she does lie awake at night. But hopefully not about too many candles on her cake. She has more work to do leading generations behind her through that door. With brashness and clamour, loud and proud.