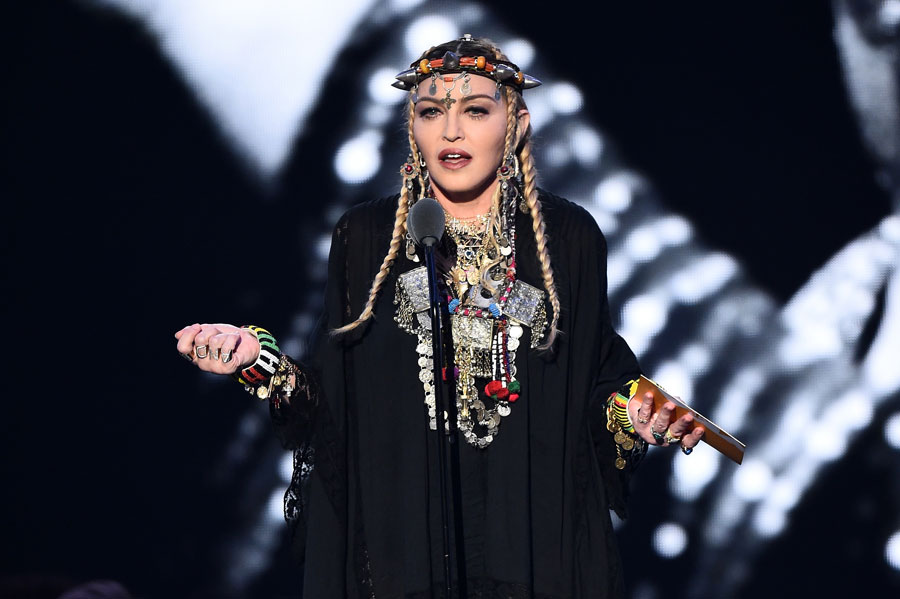 Madonna presents the award for Video of the Year onstage during the 2018 MTV Video Music Awards at Radio City Music Hall on August 20, 2018 in New York City. Photo: Michael Loccisano/Getty Images for MTV.

The online backlash came fast and furious on Monday night — and rightly so.

The culprit? Pop superstar Madonna and her self-important “tribute” to the late, great Aretha Franklin at the 2018 MTV Video Music Awards at Radio City Music Hall in New York City.

To put it gently — it was a hot mess and left many wondering how she landed the gig of paying tribute to the Queen of Soul in the first place.

Following a video of Franklin singing “I Say a Little Prayer” on the big screen, members of the audience were reduced to tears as they remembered the legendary singer who died on Aug. 16 at age 76.

RELATED: Remembering Aretha Franklin: Celebrating the Life & Times of the Queen of Soul

Madonna, however, apparently saw this as an opportunity to try to one-up the video salute, taking to the stage to pay tribute to the singer by revealing how Franklin impacted her personal career.

Granted, the Material Girl, who turned 60 last week, is no stranger to controversy. No doubt she’ll weather this storm like she has every other time. But I still think her ill-advised speech was a doozy — even for Madonna!

Dressed in a flowing black dress with beaded African jewelry around her neck and head, Madonna’s farewell to the Queen of Soul came before she presented the Video of the Year award to singer Camila Cabello.

However, Franklin factored little into Madonna’s rambling, self-indulgent speech in which she spoke — at great length — about how she started her own business and built her own career before (finally!) remembering to thank Franklin for “empowering all of us. R.E.S.P.E.C.T.”

Many took to Twitter to accuse Madonna of cultural appropriation while others pointed out that she’d managed to make the show’s only tribute to Franklin all about, well, herself.

Marc Snetiker of Entertainment Weekly described the speech on Twitter as: “Madonna presents an Aretha Franklin tribute by Madonna featuring Madonna with Madonna and Madonna as ‘Madonna’.”

Madonna tirelessly walked the visibly confused audience (and viewers at home) through her exodus from Detroit as a teen to make her name in showbiz, touching on her trek to Paris, poverty, guitar lessons and even, yes, the time she let her rear end hang out at a previous Video Music Awards after breaking a stiletto.

The moment was all very … Madonna.

The outraged online reaction harkened back to the 2016 Billboard Music Awards when Madonna donned a Purple Rain suit to honour Prince shortly after his death.

“Just to clarify: I was asked to present video of the year by MTV!,” she wrote. “And then they asked me to share any anecdotes I had in my career connected to Aretha Franklin! I shared a part of my journey and thanked Aretha for inspiring me along the way. I did not intend to do a tribute to her! That would be impossible in 2 minutes with all the noise and tinsel of an award show. I could never do her justice in this context or environment. Unfortunately most people have short attention spans, and are so quick to judge. I love Aretha!”

Instagram post aside, I think that, going forward, producers may want to consider casting a wider net when it comes to enlisting talent to pay tribute to recently-deceased legends. Just a thought …