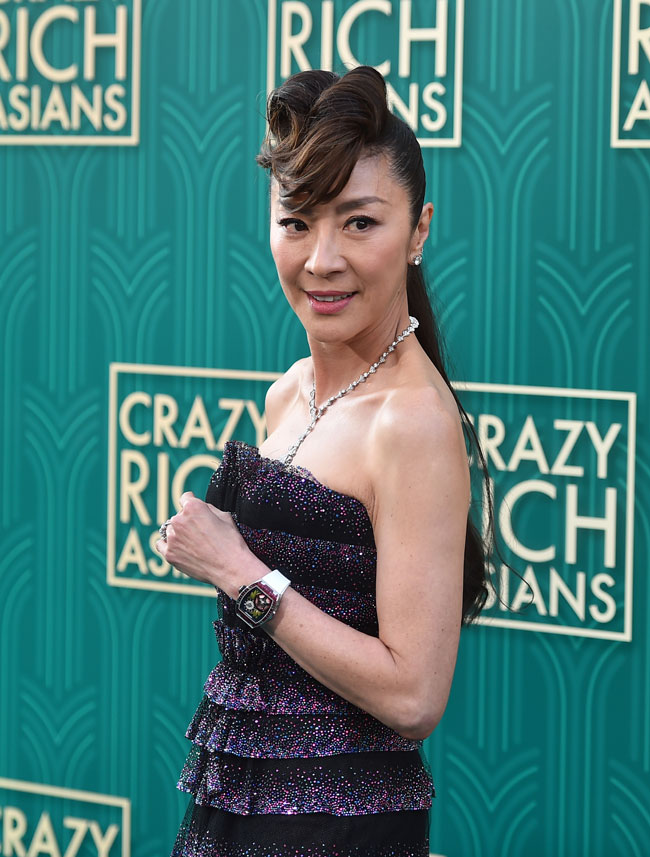 For all the shimmer and razzle-dazzle that Crazy Rich Asians always promised to deliver — a high-concept rom-com that unabashedly purports to return us to the peak days of Nora Ephron and Richard Curtis — the work by the Chinese-Malaysian legend in the flick is, indeed, on a whole other level. Effectively, she transcends the genre.

In fact, a declaration, if you will: in all her subtle gestures and unwavering stares, Yeoh is as effective as Meryl Streep was in The Devil Wears Prada, another standard-issue rom-com hijacked by a monstrous (but not too monstrous) battle-axe.

It is there in the very first meeting between her character, Eleanor Sung-Young, and her son’s new girlfriend, Rachel, whereupon hearing about the young lady’s work, she dead-pans, “Pursuing one’s passion … how American” (Yeoh is “channeling a Siberian winter,” as one reviewer put it).

It is certainly there when, in another high-wire scene — the actress arguably using silence in the same way she used martial arts in her most famous performance in Crouching Tiger, Hidden Dragon more than a decade ago — when the matriarch matter-of-facts, “You will never be enough.”

It is there, perhaps in the slyest slow-boil dramatic sequence, when she challenges her “son’s intended to a mahjong showdown that is akin to a poker game-induced shoot-out in a Western,” as professional Oscar prognosticator, Gold Derby, put it in so many words.

And, yes, that website asked what so many of us Yeoh-Heads have been asking ever since seeing the movie: can the 56-year-old ride the performance to an actual Academy Awards nomination for Best Supporting Actress?

It was always going to be an uphill battle, given the comedy-aversion typically in many of those top categories, but if a case was going to be made about diversity in casting — Crazy Rich Asians is famously the first non-period film in 25 years to feature an all-Asian cast [the last being 1993’s The Joy Luck Club], along with an Asian director, Jon M. Chu — they could do no better than giving Yeoh a chance to wave the flag. And, hey, it also doesn’t hurt that the film hit No. 1 at the box office in its first weekend, outpacing initial projections with a $34 million haul in five days — in that there is probably nothing Hollywood likes more than a project that looks and smells like a winner.

Certainly, Yeoh has one thing going for her: the Academy has been partial to mothers, especially in this decade, in that particular acting category. See: the 2017 race when Allison Janney’s scary-funny take as skater Tonya Harding’s mama in I, Tonya squared off against Laurie Metcalf’s micro-managing mom in Lady Bird, with Janney eventually triumphing.

Whatever happens on the awards front, I’m just pleased that a lot more people are going to be in on the majesty of Yeoh, who first emerged as the reigning heroine of  Hong Kong martial arts films in the 1980s (“watching Yeoh move is like falling prey to a beautiful, deadly beast,” is how a profile in GQ put it this month), and had her first fling with western fame when she played a Bond Girl (the first Asian to do so!) in the Pierce Brosnan vehicle, Tomorrow Never Dies.

That moment, back in the 1990s, gave her an entree into world-wide fame, but it did not exactly put her on the fast track. Because … well … Asian. “When I first came to do movies here,” Yeoh shares with GQ,  “I remember very specifically someone said, ‘If we cast an African-American lead, there’s no way we can cast you, because we can’t have two minorities.’”

The subtlety of Yeoh’s instrument is perhaps best exemplified by what she does in Crazy Rich Asians, in my opinion: instead of putting on the oh-so-easy mask of the domineering Asian mother, she comes through with a character who is a pain, alright, but obviously motivated by Asian values of family. Indeed, Yeoh herself prefers to see her character not as a villainess — much in the same Streep was not a easy-to-categorize villainess in Devil Wears Prada — but a “dragon mom.”

Dragons being, after all, the most powerful, yet benevolent, creatures in Asian culture.