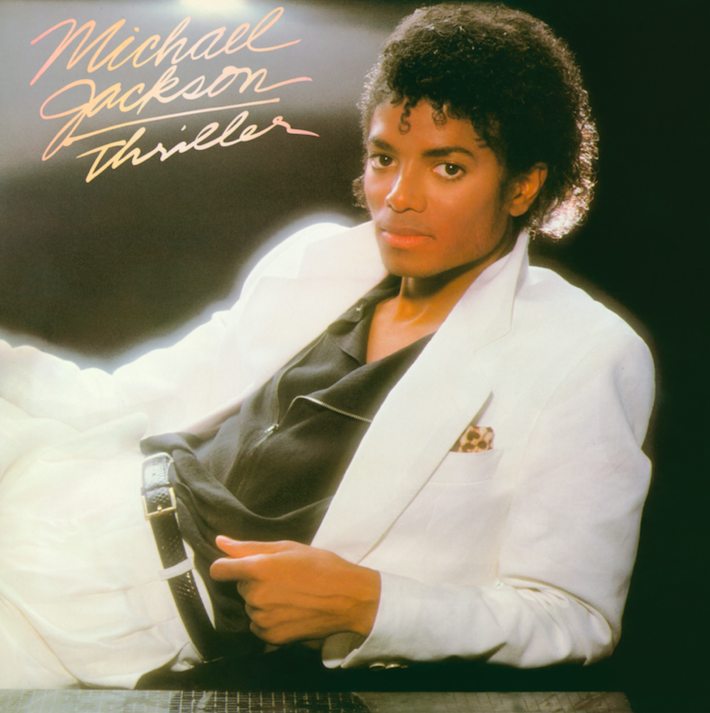 Back in 1982, when Michael Jackson released his groundbreaking album, Thriller, he wore a white Hugo Boss suit for the album cover. Thriller would go down in music history as one of the best-selling albums of all time and launched Jackson’s career into another stratosphere. The cover image of a reclining Jackson, softly backlit, seemingly glowing in his white suit like a celestial being, would forever be etched in the minds and memories of fans the world over.

August 29th would have been the King of Pop’s 60th birthday and to celebrate this “diamond jubilee”, Hugo Boss has reissued an updated version of the white suit. With only 100 of them available worldwide, the suits are numbered and available in select Hugo Boss stores and online. (Canadians who want to purchase one can order from the brand’s US site but must have a US shipping address.) But the Boss x Michael Jackson collection also features three styles of unisex cotton jersey tees which fans can find here Canada online and in select Hugo Boss locations. Like the exclusivity of the Boss suit, the white suit as a fashion item enjoys a reputation of being a rare bird. Its very appearance — immaculate, crisp and pristine — signals an aura of being untouchable. It also connotes ultimate luxury, signalling a defiant wearer who couldn’t care less about such mundane matters as dirt.

But despite it’s monochrome character, the white suit is a multi-faceted fashion item. It can convey grace and elegance but can also be avant-garde.  It can look at home in some of the  most revered places like the wedding altar but it can also get torridly sensual  on a disco dance floor.

Jackson was not the first person — nor will he be the last — to embrace the white suit in all its contradictory glory. Nor do fans of the white suit only exist in the realm of entertainment. Author Mark Twain was known to wear white. And if you’re of boomer age and think that wearing a white suit is better left to today’s hipsters, this is what Twain said to journalists back in 1906.

“I have found that when a man reaches the advanced age of 71 years, as I have, the continual sight of drab clothing is likely to have a depressing effect upon him. Light-coloured clothing is more pleasing to the eye and enlivens the spirit.”

Here, we  look at some other white suits that gained legendary status. If Michael Jackson’s Thriller suit made him look angelic, John Travolta gave his Saturday Night Fever white suit copious amount of sweaty sex appeal and macho swagger. The hit movie championed the white suit of the ’70s’ wide lapels, matching waistcoats and tight pants with bell bottoms accessorized with a fair amount of chest hair and gold chains on display. No other era anointed the white suit with such wanton sexuality.

This is a perfect example of what happens when you tinker with an icon. When Celine Dion wore a John Galliano backwards tux to the 1999 Oscars, it was thoroughly mocked by critics and the public and landed her on multiple Worst Dressed Lists that year. The red carpet of that era was one dominated by gowns and to take such a bold step in another direction and wear pants — much less a quirky jacket — was way too avant-garde and ahead of it’s time. Perhaps no other man is associated with always wearing a white suit as the late writer Tom Wolfe. The author of such classics as Bonfire of the Vanities and The Right Stuff, once revealed in an interview how the white suit became his signature style.

In his early days working as journalist in New York, he had to buy a suit, the customary outfit of newspaper journalists at the time. Being from Richmond, Virginia, he bought what was known traditionally as summer attire in those parts — a white suit. But the suit he bought in New York was also of a heavier fabric (and not having much money to spend out on another suit) he was able to also wear it during the winter months. Thus, a fashion dandy was born. Granted this was not a white pantsuit, but it’s considered one of the most iconic white suits worn by a woman — and one of the chicest wedding dress of all time.

When Nicaraguan socialite, Bianca Pérez-Mora Macias, married Rolling Stones frontman Mick Jagger in 1971 on the hedonistic French Riviera, she wore a Yves Saint Laurent tuxedo jacket and a bias cut skirt. The legendary wedding was a frenzy with hundreds of paparazzi and an international guest list of rock stars and other A-listers of the era. While the marriage didn’t last, the bride’s look is still referenced — and copied — to this day.