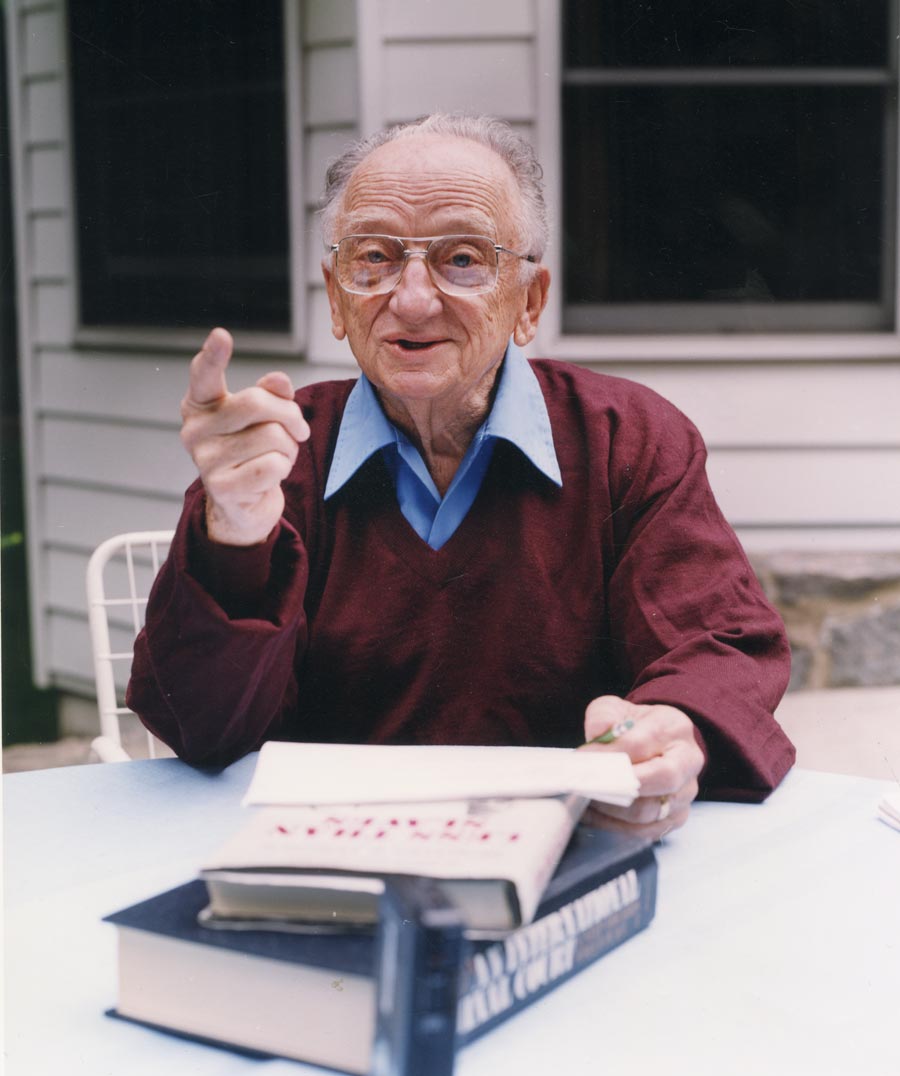 Longevity remains a mysterious thing. But at 98, Benjamin Ferencz seems determined to stay alive until he has achieved his dream of ending inhumanity.

The Harvard-educated lawyer gathered evidence at Nazi death camps at age 25, and, at 27, prosecuted 22 men at Nuremberg, accused killers of a million people between them. Enough good for one lifetime — for most.

But his second act saw the institution in 2002 of the International Criminal Court. He even prosecuted its first defendant, Thomas Lubanga Dyilo, a warlord from the Democratic Republic of the Congo, charged with kidnapping, brainwashing and training child soldiers.

“It burns within me all the time to see how horribly people can treat other people, and how difficult it is to get them to behave in a humane and peaceful way,” Ferencz says over the phone from South Florida, where he lives with Gertrude, his wife of 72 years.

The voice is vibrant, and between his “mantras” (as Avrich calls his passionate message) he’ll joke around. But Ferencz, who demonstrated his ability on 60 Minutes last year, is feeling poorly, receiving antibiotics for an infection in his leg. He’s soldiering through a few phone interviews, having cancelled a personal appearance at the film festival. In the background, I can hear caregivers whispering at him to not spend so much time on the phone.

Is he feeling better after a week on antibiotics? “I am not. But I’ll be fully recovered in about 10 minutes after we’re done talking,” he says with a chuckle, immediately apologizing for needling me. “I’m sorry. I have a tendency to make bad jokes.”

This is Ferencz at half-speed. Avrich tested his vaunted endurance after seeing the 60 Minutes episode and getting him to agree to starring in a feature-length doc. In return for his participation, Avrich agreed to direct proceeds from the film to the Ben Ferencz International Justice Initiative at the Holocaust Memorial Museum in Washington, D.C.

“There was that moment we rolled into his very modest home with three trucks and six cameras and he stood there with his mouth open,” Avrich recalls. “And he said, ‘What’s with all this stuff? How long you going to be here?’ And I said, ‘Ben, this is your life, we’re going to be covering it all.’

“He said fine, let’s do it.’ And after an exhausting day of 10 hours of filming, I said I’ll come back tomorrow and film you swimming.’ And he said, ‘No, we’re doing it today.’

“His son Don doesn’t worry much about his father, because he knows his energy. His father flies by himself to The Hague and the UN. He’s extraordinarily lucid and passionate. In the film, Don calls him ‘this inferno,’ and ‘this furnace.’”

(The filmmaker and his subject aren’t finished with each other yet. There’s a plan for them together to take Prosecuting Evil on a tour of Holocaust Museums in October).

Ferencz was born in 1920, to Romanian parents in the Transylvanian Carpathians, a region that — in the geopolitical mess of post-First World War — fluctuated on any given day between being Romania and Hungary. Whatever it was, his parents sensed it was increasingly not a good place to be Jewish and fled to New York, where the small boy had to cope with tough neighbourhoods, speaking not a word of English.

Yet his teachers soon recognized he was gifted with prodigious learning abilities and language skills. He won a scholarship to Harvard Law School. In the Second World War, he was in General Patton’s Third Army, where, after a stint with an anti-aircraft artillery battalion, his civilian credentials got him assigned to set up a war crimes branch and collect evidence. The first camp he saw liberated was Buchenwald.

“Combat was still on, we were getting into camps while the crematoria were still going, while the inmates were groveling in the garbage for a morsel of food,” Ferencz recalls.

In Prosecuting Evil, Ferencz is recalling these exact memories when he breaks down emotionally. Does he keep these memories and emotions at bay? He admits his humour provides a bit of cover. “I am emotional all the time. But if you’re crying on the inside, you better be laughing on the outside, or you’ll drown in tears.”

The term PTSD hadn’t been invented yet in the ‘40s, but he’s pretty sure he experienced it. “No one could have experienced the Holocaust and not been profoundly affected. We’re not made of stone. When you’ve experienced the horrors of wartime and you hear people talk about the possibility of having humane rules for man’s most inhumane activity, it sounds like a good idea. But you know the reality is somebody on the other side is trying to kill you, and your idea is to kill him first.

“Nothing has changed, except our capacity to kill has grown so enormously, you don’t even know who you’re killing anymore.”

Barely home from that trauma, Ferencz was called back, to take on one of the most significant of the Nuremberg war crime trials — the Einsatzgruppen, a task force of the SS with the singular mission of carrying out mass killings.

“It took me a bit of time,” he says about returning to something like a normal life. “The Pentagon called me back to Germany, and I said, ‘I’m not going back unless we’re at war again with Germany and we’re losing.’ They said, ‘We need you Ben.’ Because as a Harvard professor I had done the research. I’d been a war crimes investigator on the scene. No one had that experience.

“So, they sent me back to the Einsatzgruppen case. I rested my case in two days and convicted all the defendants. That’s a record that will never be matched. I hope.”

Ferencz also contributed extensively to another significant documentary this year, The Accountant of Auschwitz, which looks at the wider definition of guilt being applied today to convict ex-Nazi war criminals in their 90s. If applied at the time, theoretically thousands could have stood trial instead of dozens.

“I couldn’t see them ever charge thousands of people,” he says. “We’d be sitting in Nuremberg still today. But what I tried to do was create a principle of law that would protect everybody in the future, that would recognize that people are entitled to live their lives in peace and human dignity. And those who defy those rules are criminals and they should be held to personal criminal account.”

But the end of the war was only the beginning, in a 20th century marked by atrocities, in Vietnam, Cambodia, Uganda, Kosovo, Rwanda, Syria, etc.

Ferencz would advocate for restitution for Jewish Holocaust victims, and later become a driving force for the creation of an International Criminal Court. His Vietnam-inspired 1975 book Defining International Aggression: The Search for World Peace is considered its manifesto, and Ferencz its founder. Another influential book would follow on the same subject, Planethood with Ken Keyes Jr. He has a mile-long list of awards, including the Martin Luther King Peace Price and the American Bar Association’s International Human Rights Awards.

“One of my great moments researching,” Avrich says, “was watching him (on video) address the International Criminal Court and his closing arguments against their first defendant, and watching the judges smiling at him in admiration. Certainly, in his ‘80s to do that, he was an inspiration. He’s an inspiration now.”

What remains a thorn for Ferencz is that, even though the U.S. signed the initial ICC agreement (in what amounted to an after-hours operation at a deserted UN, as detailed in the film). Unfortunately, President George W. Bush refused to officially recognize the U.S.’s participation (possibly because he could have been open to prosecution for invading Iraq without UN approval). And America remains a non-participant in the grand project.

Does it rankle him that his own country, America continues to drag its heels? “It bothers me that anybody’s dragging their heels,” he says.

“But America’s a great democracy. It’s necessary that there be differences of opinion. There are some people who have a conservative view, and they say, ‘We’ve got the power, use it. If they don’t like it, kill them, get rid of them.’

“There are others like me who believe that’s the wrong way to go. When we’re still talking about using armed force to settle our differences, that’s suicidal and genocidal and just plain stupid. It’s the right of all human beings to live in dignity, and when you’ve got people’s children snatched away from them at the border because they don’t meet regulations. It’s inhumane, it’s a crime against humanity,” he says, referencing the Trump administration’s family-separation border policy.

Two documentaries, a 60 Minutes episode and an appearance in Michael Moore’s upcoming anti-Trump doc 11/9. This is apparently Ben Ferencz’s media year. “You’re getting a lot of attention lately,” I say.

“I’ve been getting attention all of my life,” he snaps back. “Believe me, attention can be a pain in the ass.”

Beneath the crust, though, validation is not lost on Ben Ferencz.

“When I finished the film,” Avrich says, “I flew down to Florida to screen it for him in April of this year. And he sat there with me, moved at the same moments that he was moved while filming.

“And when the film finished, he wept, put his hand on my hand, and said, ‘That’s all I need.’”