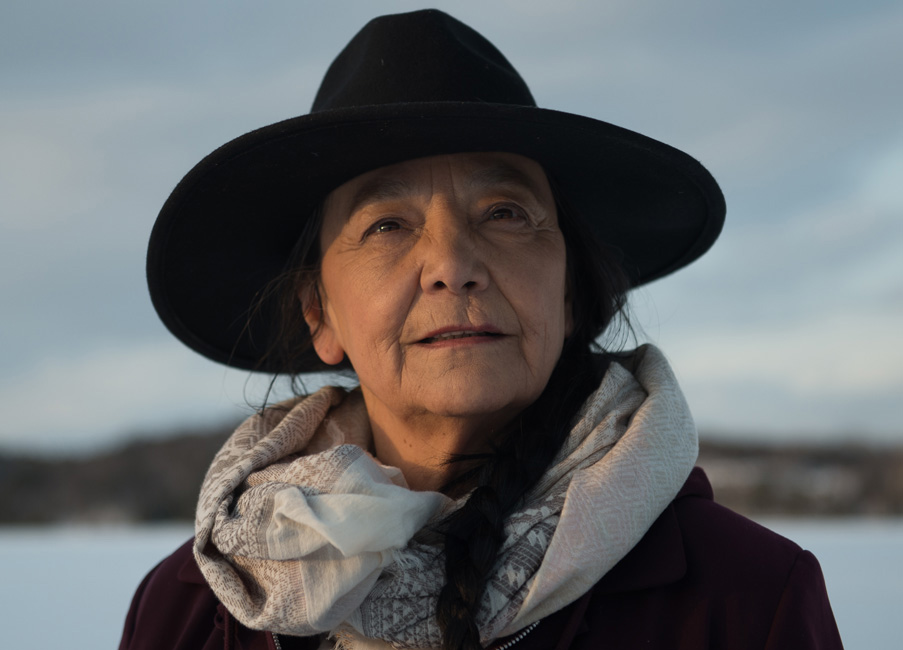 In 2018, Tantoo Cardinal appeared in the first big screen starring role of her near-50 year career in the drama Falls Around Her. She was 68 years old. In honour of her 70th birthday, we’re revisiting our interview with Cardinal about the role, Indigenous representation and how her childhood in Fort McMurray, Alberta, influenced her acting career.

Tantoo Cardinal is ready for her close-up. At 68 years old, and after 48 years as an actress on stage and screen — a run that’s earned her everything from the Order of Canada to the Academy of Canadian Cinema and Television’s Earle Grey Award for lifetime achievement — the Indigenous actress finally landed her first starring role in a feature film.

It seems improbable, after a celebrated career that includes roles in films like Dances With Wolves and Legends of the Fall, that Cardinal had never received top billing, but Falls Around Her, a film about an Anishinaabe musician (Cardinal) who returns to her northern Ontario community in a futile attempt to return to the land and leave fame behind, corrects that oversight. It makes its world premiere at on Sunday, Sept. 9 at the Toronto International Film Festival.

Naponse, an Ojibway filmmaker who also wrote and produced the movie and who first worked with Cardinal on her 2010 feature Every Emotion Costs, shot Falls Around Her in her home community of Atikameksheng Anishnawbek. The film is one of multiple movies at TIFF this year focussed on Indigenous and First Nations communities or characters, and one of three that Cardinal herself appears in (the others being Through Black Spruce and The Grizzlies). The actress suggests that’s “an indication that there is change” when it comes to representation in film. “We have the people, and our producer [types] have been working steadily to kind of build a pathway to the funds … This is a front that’s been moving forward for a number of years now.

“The only way that I’ve been able to survive is that there’s been bits of hope all along the way and the absolute confidence and the assurance in my own inner world that our ancestors have not been seen yet by this society, and to know the depth and profundity of the civilization that we come from as Indigenous people … We haven’t even begun sharing some real essential qualities, elements, essence, enzymes, everything, to make this a stronger society.”

Cardinal, who is of Métis descent, grew up in Fort McMurray, Alberta, in a home with no television, telephones or video games. Her childhood movies included fire prevention films provided by the forestry department, occasionally accompanied by a feature film. Instead, she says, she spent a good deal of time alone in the bush, among nature, where the trees served as her first audience and the birds as her friends.

“I’m so grateful for that experience,” she adds, “that … whatever is feeding my creativity is from a clean place that wasn’t manufactured by a games company or movies that were being created by other people.”

In her early years as an actress Cardinal saw white actors painting their skin to play First Nations or Indigenous characters. Fast-forward 48 years to this past June, when the Academy of Motion Picture Arts and Sciences, the organization behind the Oscars — which faced its own #OscarsSoWhite in 2015 — invited her to join the Academy as a means of increase cultural diversity in film. It’s a massive leap in progress, though Cardinal sighs when I ask her which stories involving Indigenous and First Nations communities still need to be shared on film, noting the wealth of untold perspectives.

“You know what would be really interesting is to get the real truth of the mechanics of the financial world done by our economists, by our financiers, and by our people who are doctors of the law, of treaties, the constitution, and all of that,” she says. “I would really like to see that stuff brought out into the light of day … There’s so much misinformation out there. You can’t even call it information, it’s so bad. And when I’m feeling dark all those things come to the surface.” She pauses, and then lets out a laugh. “But, you know, there’s probably a lot of fun stuff that we can talk about.”

Of course, the idea of telling her own story is another issue Cardinal’s struggled with throughout her career. She points to the fact that it took her 48 years to land a leading role, not to mention that most leading parts tend to go to younger stars. “It’s been a great frustration for me many, many times that I am just a colour, or some kind of background, for these lead characters. (It’s) their stories, it’s not my stories, and it’s been so frustrating only to be able to share just a moment, or a flash, or a piece of wisdom, or something like that, and not having my character’s life really respected in terms of the overall story that we tell as people in this world today.”

Falls Around Her finally puts the focus primarily on Cardinal, allowing her to explore the range of her character as well as her own talents. And, as luck would have it, she recently received a grant that will allow her to return to her home community and delve deeper to explore her own real-life family heritage. “In all those 48 years (of her career) it’s so rare that I was able to tell any Métis stories. So I’m hoping to be able to be a part of creating some more of these stories. I haven’t really done that bit yet, to be writing or producing or directing, but right now I’m thinking in terms of researching and teaching. So we’ll see.”

And as for Falls Around Her, or the other films centered on Indigenous and First Nations characters at TIFF, Cardinal hopes audiences use them as an opportunity to, as her community says, “decolonize” their minds, “because people have (been) brainwashed generation after generation after generation to consider us lesser. So if people pick through their brains, and in their whole systems, and say, ‘Okay, what have I been carrying around that’s not even true?’ that would be nice.”

I repeat the term “decolonize your mind” back to her and tell her I like that expression. Cardinal laughs again. “We’re always kind of a step ahead.”