Jeopardy!, Celebrity and Why We Care About Alex Trebek’s Beard 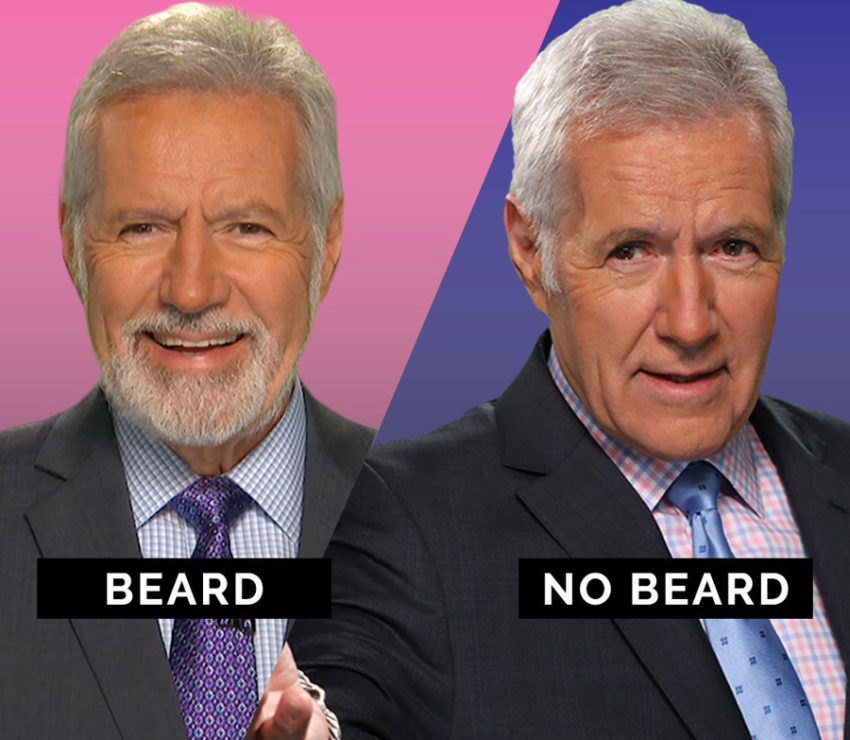 Because ultimately, that’s what all the hoopla over Jeopardy! host Alex Trebek’s new beard boils down to. For those who haven’t heard, on Monday the beloved Sudbury, Ont.-born game show host walked onstage to kick off the 35th season of Jeopardy! sporting a neatly trimmed white beard. The 78-year-old, who famously donned a moustache for decades before shaving it off, re-growing it and then shaving it again, addressed his new “face sweater” right off the top.

“No need to inquire about how I spent my summer vacation. Because so many of you people asked me about it, I decided to re-grow my moustache. But, as you can see, things got a little out of hand. These hairs kept attracting friends. Hopefully, it won’t be a distraction for our players.”

A distraction for the players? No, not at all. For the rest of the western world, however, it proved a top priority. On social media, the hashtag #AlexTrebeard began trending while the beard itself already has its own Twitter account. Trebek’s facial hair even made the news while an online poll posted by Jeopardy! showed that, as of this writing, 73 per cent of respondents prefer the host’s bearded look to his previous, clean-shaven incarnation.

But why, you might ask, do people care so much about a celebrity’s beard (other talk show hosts like The Late Show’s Stephen Colbert, his predecessor, David Letterman and former Daily Show host Jon Stewart also garnered a big reaction when debuting their own “chin curtains”)? Part of it is, of course, the superficial aspect of celebrity, where cutting your hair or gaining/losing weight or, apparently, growing a beard, becomes a topic of public discourse. And, of course, Trebek did note on Jeopardy! that he’s letting fans decide whether or not he keeps the beard (hence the online poll). I, however, am willing to bet a Daily Double on the idea that, in these times of social uncertainty, where corruption and racism and deceit are on full display across the political spectrum — from the Oval Office all the way down — and tribalism fuelled by anger and ignorance is so rampant that civil debate seems almost impossible, Alex Trebek’s beard is a welcome distraction.

What else can people debate these days without triggering tribal reactions, bullying, protests or public resignations? No one is organizing a march for or against the beard. No one is calling anyone names — “beardist,” or a “beard troll” — over their opinion on the beard. No foreign governments are hacking the beard poll on social media where, for the record, the popular vote wins, and when the poll closes and the decision about the beard is made, no vindictive little man is going to reverse the result via a “beard notwithstanding clause” (if you don’t get that last joke because you don’t live in Ontario under Doug Ford, click here for context).

The point is, in the same way that watching a mindless reality show helps people decompress after a stressful day at work, the Trebek beard debate is the sort of innocent amusement that offers an opportunity for everyone to exhale, have a laugh and forget about more serious matters for a while.

In fact, it’s ironic that Trebek noted his hope that the beard wouldn’t prove a distraction, because sometimes a distraction is exactly what we’re looking for.