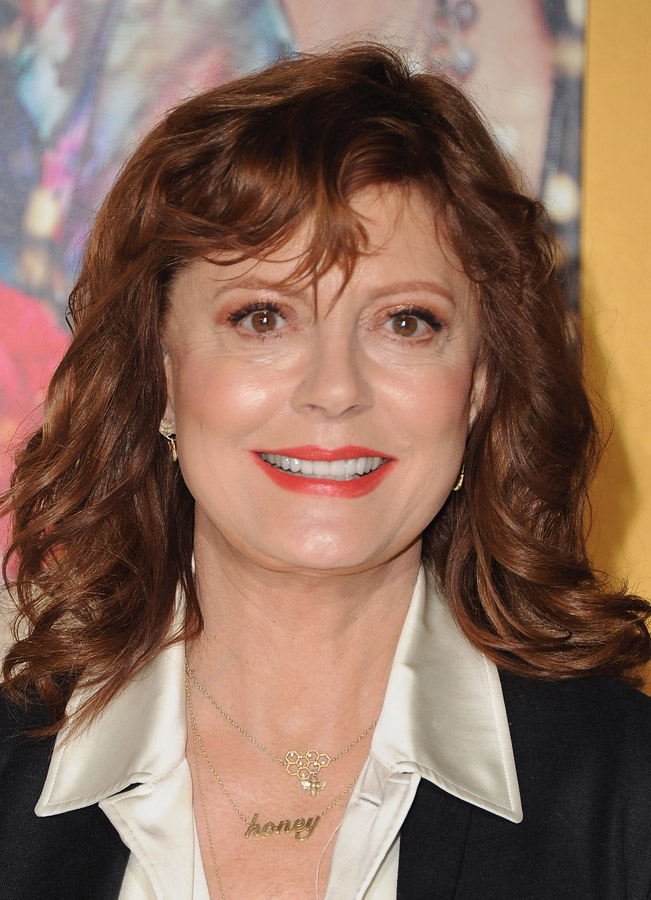 Susan Sarandon had a cold. The year was 2015 and the then-69-year-old had only recently returned from Burning Man — an annual pop-up community of artists and entertainers in Nevada’s Black Rock Desert — where she’d gone to honour psychedelic drug activist and psychologist Timothy Leary, whose cremated remains she’d brought along with her. When I met her in a downtown hotel during the Toronto International Film Festival mere days later, the actress went through more Kleenex than interview questions, doing her best to stifle her sniffles to offer me a few answers.

Fast-forward to 2018 and the same hotel at the same film festival. Once again, I take the long elevator ride up to the appropriate floor and count the lines on the same wallpaper in the hallway, awaiting my cue to enter the hotel room and speak with the Oscar-winning actress. This time, however, I’m greeted by a beaming 72-year-old screen legend in a black blouse and pants, confidently seated on the couch and sipping water from a box as she offers a courteous smile and hello. No tissues necessary this time around.

Instead, Sarandon enthusiastically recalls the multiple standing ovations her latest film, The Death and Life of John F. Donovan, a drama about an 11-year-old boy who becomes pen pals with a troubled 20-something Hollywood television star, co-written and directed by Quebecois wunderkind Xavier Dolan, 29, received at its world premiere at TIFF the previous night.

In the film Sarandon plays mother to the title character (played by Game of Thrones’ Kit Harrington), a young man struggling with the pressures of fame and lack of privacy and the artificiality of Hollywood. It’s the sort of storyline I imagine the actress can relate to, having spent the better part of almost five decades navigating the shark-infested waters of Tinseltown.

“Everything is like on steroids now,” she says, referring to the ever-expanding gaze of social media. “I could make my mistakes much more privately when I was younger. Now really everything is out there. And stuff’s out there that’s not even true.”

And yet Sarandon is one of those true Hollywood survivors, a star who’s endured the celebrity storm and came out clean on the other side. Her resume speaks for itself, including The Rocky Horror Picture Show, Bull Durham, Thelma & Louise, Lorenzo’s Oil and Dead Man Walking, for which she won the Best Actress Oscar in 1995, among many others. Part of her key to survival, she explains, is her willingness to take small parts, opting into roles more for the challenges they pose or, as in the case of The Death and Life of John F. Donovan, the opportunity to work with a specific director.

“I’ve always seen myself as a character actor and I think that helps. If you’re the most beautiful woman at 20, it’s hard to last to 72 and people find it hard to maybe see that transition,” Sarandon explains. “But if you’re a character actor like [Robert] De Niro or Sean Penn or whomever, I think you make a wider base and it becomes easier.”

At this point in her career she could, of course, rest on her laurels and collect paycheques for cameos in film and television — “I think those people, the icons, get paid more but it’s not as interesting to me. I like morphing” — but it’s clear that it’s the excitement of testing the limits of her abilities with each role that drives her forward. “Nothing can prepare you for that except to go in and be open and have a good time.”

Funnily enough, though, as she moves ever forward in her career — from her Emmy-nominated turn as Bette Davis in the 2017 FX anthology series Feud: Bette and Joan to two films at TIFF this year, John F. Donovan and the drama Viper Club — new generations of viewers continue to happen upon her classic earlier performances.

Even the classic 90s sitcom Friends, on which she enjoyed an Emmy-nominated guest appearance as a soap opera actress in 2001, is finding a second life with younger millennials on streaming services like Netflix. “It is really gratifying to hear those conversations and to have people discover [those films and shows]. And I have a lot of friends that are young who really enrich me. And my kids. This is the reason to have kids — they keep you up to speed on things that you wouldn’t necessarily know anything about … And I think that keeps me surprised and flexible and open.

“I feel like Bette Davis now,” she adds when discussing her own acting future, noting that she listened to many of the actress’ interviews while prepping for her Feud role. “This is what I do and I do it because I love the collaboration and I do it because I’m kind of lazy so it’s interesting for me to find out about the world through [filmmakers’] eyes … So if I stop having fun then I’ll stop, but otherwise I really like being engaged.”

Click here for more information about The Death and Life of John F. Donovan TIFF screenings.