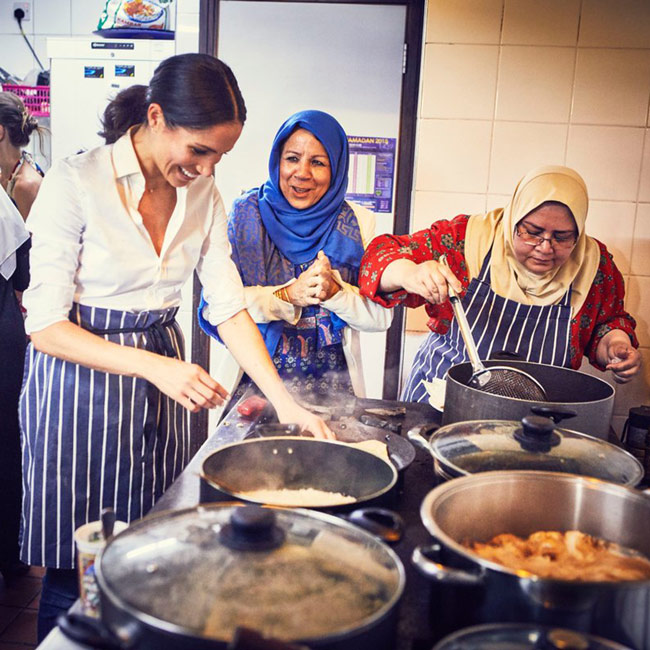 It looks like all those years spent in front of the cameras for the popular legal drama Suits has already come in handy.

Former actress Meghan, Duchess of Sussex made her first solo outing as a member of the House of Windsor — and, fittingly, she did it onscreen!

On Monday, the Royal Foundation — which runs the charities of Meghan, Prince Harry, Prince William and the Duchess of Cambridge — released a short film which shows Meghan playing an active role in a community kitchen run by a group of women who lost their homes after the devastating Grenfell Tower fire in June 2017.

At the time, Meghan was still living in Toronto (where Suits is filmed) when the tragedy unfolded and, “deeply wanting to help” — and after moving to London prior to her engagement to Prince Harry — she finally got the opportunity to meet with the women who were rebuilding their lives one step at a time.

According to reports, the 37-year-old played a pivotal role in the kitchen by suggesting the women create a cookbook of their favourite 50 recipes to help raise funds to keep the centre open and thriving.

The book, Together: Our Community Cookbook, comes out this month and includes a foreword written by Meghan. As the duchess writes, the Hubb Community Kitchen (“hubb” means “love” in Arabic) “is a place for women to laugh, grieve, cry and cook together.”

She continues: “The kitchen buzzes with women of all ages; women who have lived and seen life; laughing, chatting, sharing a cup of tea and a story, while children play on the floor or are rocked to sleep in their strollers.”

Meghan found inspiration for the cookbook during a visit to the Al Manaar Muslim Cultural Heritage Centre in west London, which she first visited (under the radar and out of the glare of the paparazzi’s lens) in January. During her secret visits, Meghan watched as the women came together to cook food to feed families displaced by the Grenfell Tower fire that killed more than 70 people.

However, due to lack of funding, the women were only able to keep the facility open for two days a week. All proceeds raised through the purchase of the Together cookbook will help ensure the kitchen stays open seven days a week — thus ensuring full tummies and more laughter.

“Melding cultural identities under a shared roof … creates a space to feel a sense of normalcy — in its simplest form, the universal need to connect, nurture, and commune through food, through crisis or joy — something we can all relate to,” Meghan writes.

“Through this charitable endeavor, the proceeds will allow the kitchen to thrive and keep the global spirit of community alive.”

A royal source confirms to People magazine that, “the Duchess has been heavily involved in the project from the start.”

Profits from the sales of Together: Our Community Cookbook will help keep the kitchen open seven days a week and widen its reach. The book hits shelves Sept. 25.