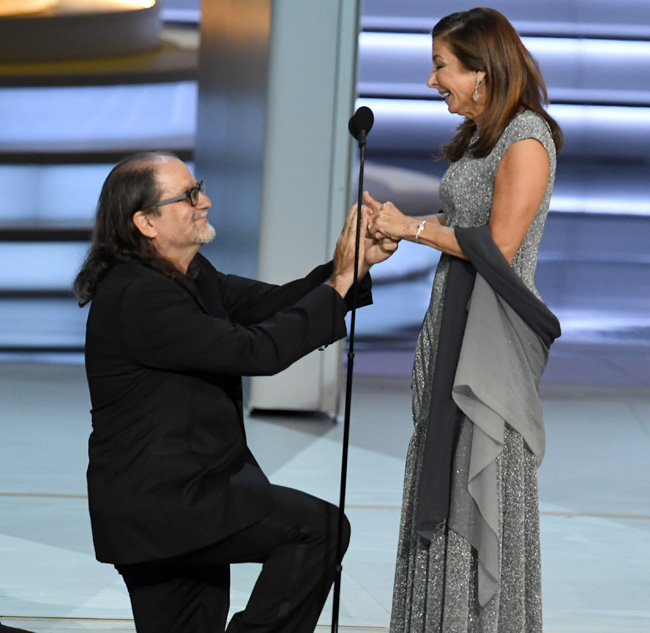 The Emmys celebrated its 70th birthday on Monday night, but it’s a surprise wedding proposal that stole the show.

While accepting the award for Outstanding Directing for a Variety Special (the Oscars), director Glenn Weiss, 57, noted in his acceptance speech that his mother passed away two weeks ago. He reflected on his mom’s positive attitude — “Mom always believed in finding the sunshine in things” — before calling his girlfriend, Jan Svendsen, “the sunshine in my life.”

“Mom was right, don’t ever let go of your sunshine,” he continued, before looking toward Svendsen. “You wonder why I don’t like to call you my girlfriend — because I want to call you my wife.”

The shocked audience responded with dropped jaws and cheers as Svendsen made her way to the stage, where Weiss presented her with the ring his father used to propose to his mother and got down on one knee to make it official. She said yes.

The spur-of-the-moment emotion proved the highlight of an awards show that was otherwise short on excitement and offered virtually no acknowledgment of its milestone 70th birthday beyond a 30-second clip montage and multiple groan-worthy Emmy history skits with Maya Rudolph and Fred Armisen.

That said, the 2018 Emmys did offer a few memorable moments — including an appearance by 96-year-old Betty White — and we’ve collected some of the evening’s best quotes, quips and one-lines below, along with the evening’s notable boomer winners.

“Can I just say, Skip Brittenham said to me a long time ago, ‘If you stay at the table long enough, the chips come to you.’ Tonight, I cleared the table.” — Henry Winkler, 72, upon winning the Emmy for Outstanding Supporting Actor in a Comedy Series for Barry.

“Kids! Kids! You can go to bed now. Daddy won!” — Henry Winkler during his acceptance speech.

“Whoever put down that carpet hates women! Time’s up!” — Amy Sherman-Palladino, 52, after making it to the stage to accept the award for Outstanding Writing for a Comedy Series for The Marvelous Mrs. Maisel.

“I’ve won a few awards in my day but I’ve lost a lot more, so I’ve got some advice for the losers. Carry that rage. Let it fill everything you do from this night forward. You were robbed. That’s a fact.” — Michael Douglas, 73, offering advice before presenting Outstanding Lead Actor in a Comedy Series.

“A little tip for you young actors — when they call and ask if you can ride a horse, don’t lie.” — Jeff Daniels, 63, while accepting the award for Outstanding Supporting Actor in a Limited Series or Movie for the show Godless.

“You think I’m going to miss a chance when I get it?” — Betty White, 96, after getting a kiss on the hand from Alec Baldwin during a segment honouring her career.

“It’s incredible that you can stay in a career this long and still have people put up with you. I wish they did that at home.” — Betty White during her tribute segment.

“On behalf of everyone in this room, I would like to thank Glenn Weiss’ fiancee for saying yes. This could have been a very different evening. You really came through.” — John Oliver, while accepting the award for Outstanding Variety Talk Series.