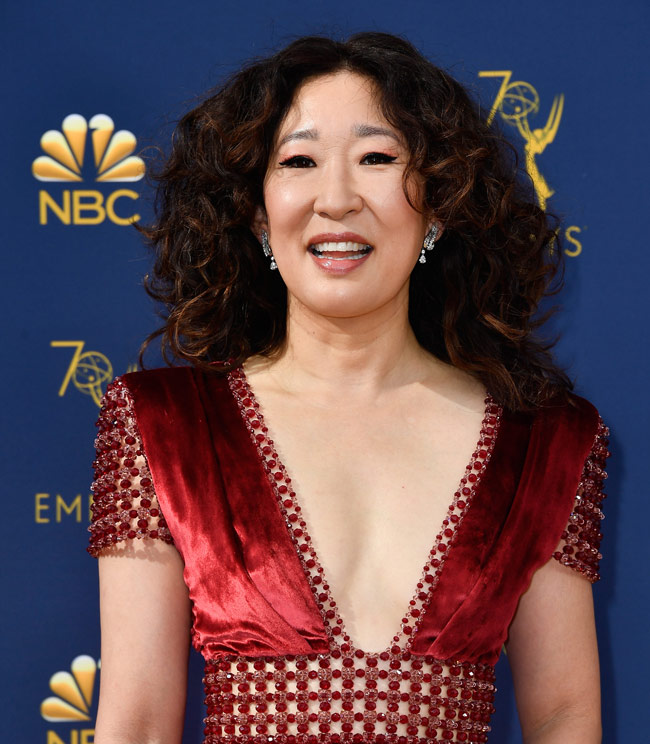 They might be seasoned pros in Hollywood but some of the Gen-Xers and Boomers at the 70th Emmy Awards on Monday in Los Angeles proved that, when it comes to red carpet dressing and awards shows, they will do it their way.

Yes, there were some that stuck to the program and brought their fashion A-game, dressed in the latest haute couture. Others, however, ignored the formal dress code but nonetheless sported logos to convey a political statement. And then there were the true originals that marched to the beat of their own private style parade.

If anything, this was one red carpet which showed fashion rules can be bent or outright broken.

We take a look at what our favourite boomers wore to celebrate the best of television.

ALLISON JANNEY
You would never have guessed the 58-year-old actress was fighting bronchitis, according to a post on her Twitter account featuring all her secret red carpet medicines.

Nominated for Lead Actress in a Comedy Series for her role in the sitcom, Mom, Janney was a picture of health and looked ultra glam in a sequined gown with a dramatic sleeve upon arrival at the Emmys. So, what were those “secret red-carpet weapons”? The tweet showed a picture of various medicines she took — including zinc lozenges, Ultra Super C and Manuka Honey.

TINA FEY
The 48-year-old opted for those classic Hollywood red carpet tropes for award dressing — pretty, feminine, delicate and a flowing gown. But with her bare and toned arms and waist cinched with a tough-looking black leather belt, she injected some of her own take-charge personality.

SANDRA OH
The 47-year-old Canadian made history at the Emmys this year for being the first Asian woman to be nominated in Lead Actress in a Drama Series category. (She previously has five other Supporting Actress Emmy nominations for her work on Grey’s Anatomy.) Although she didn’t win the big award this year, she had two of her biggest fans on hand — her parents.

MEGAN MULLALLY
Florals — especially the big and bold variety — are not typical red carpet attire. However, we bestow a Big Blooming Botanical Award to the 59-year-old actress, nominated for her role as Karen Walker in the Will & Grace revival, for squashing that red carpet style diktat with her strikingly dramatic floral gown.

LAURIE METCALF
The 63-year-old actress from the now-cancelled Roseanne reboot, proves that anyone, regardless of their age, can wear a white gown. The elegant silhouette of this Badgley Mischka gown, along with her sleek hairstyle and subtle accessories, make this a strikingly sophisticated look. TRACEE ELLIS ROSS
When your mother is the legendary Diana Ross, chances are you’ll pick up a tip or two on how to make a grand and eye-popping entrance. The 45-year-old actress from the hit TV show Black-ish opted for full-blown drama in a big billowing pink gown from Valentino.

THANDIE NEWTON
Showing the softer side of pink in this graceful Brandon Maxwell gown, the 45-year-old British actress evoked some old school Hollywood glamour and took home the Supporting Actress in a Drama Series award for her role on Westworld.

TED DANSON and MARY STEENBURGEN
It was great to see some of Hollywood’s long-lasting showbiz couples arriving together on the red carpet. Married for over two decades — a lifetime in Hollywood years! — the two actors radiated old school grace and charm. And some style points to 65-year-old Steenburgen for her patterned pant suit. It was red carpet worthy, but could also work for a multitude of other different events.

FELICITY HUFFMAN and WILLIAM H. MACY
Another longtime celebrity couple, these two actors dated on and off for 15 years before tying the knot in 1997.  Both went for a timeless look for the red carpet — she in a black power pantsuit and he in an elegant tuxedo.

NIKOLAJ COSTER-WALDAU and wife NUKAAKA COSTER-WALDAU
The 48-year-old Game of Thrones actor brought his wife of two decades, a Greenland singer-actress of Inuit, German and Norwegian extraction. Perhaps Coster-Waldau took a page out of the stylebook of his Jaime Lannister character, for which he was nominated for in the Supporting Actor in a Drama Series category.

Instead of a standard black tuxedo jacket, he went for a lush gold velvet jacket — not unlike the decadent opulence and sartorial splendour of the Lannisters and the residents of King’s Landing.

CICELY TYSON
At 93 years old, this groundbreaking actress was no shrinking violet on the red carpet. The blossom prints on her dress were big and bold and her jacket featured dramatic sleeves and oversized collar. Her heels were shocking pink and be-jewelled. To the ingenues on the red carpet, take notes from a legend.

TINA LIFFORD
On paper, the description of this gown — clashing patterns, mixed textures, thigh-high slit, asymmetrical neckline — would suggest it’s a hot mess. Perhaps she deserves an award for Biggest Fashion Risk of the Night, but the 53-year-old actress-playwright, who stars on Queen Sugar, successfully pulled the look off with ease — and in thigh high boots, no less!

AMY SHERMAN-PALLADINO
The 52-year-old television writer, producer and director made history when she won two Emmys for Comedy Writing and Comedy Directing for her show, The Marvellous Mrs. Maisel.

She is the first woman in Emmys’ history to reach this accomplishment. Her unique fashion sense was also in full display as she took to the stage in her signature top hat and mini — surely that’s a first in Emmys history, too.

TARAJI J. HENSON
Formal red carpet events almost never allows an actress to show off her great gams — unless her gown has a high slit. But the 48-year-old actress and star of Empire strikes it lucky with this Giambattista Valli Haute Couture gown which puts her legs on display in front but trails behind like a gown.

JENNIFER LEWIS
It wasn’t all gowns and tuxedos on the Emmys’ red carpet this year. The 61-year-old star of Black-ish made a different sartorial statement, dressed in a custom Nike sweatshirt, leggings and sneakers.

It was a stand of solidarity for former San Francisco 49ers footballer, Colin Kaepernick, whose quiet protest of police brutality and racial injustice was to kneel during his games during the U.S. national anthem. Her support also extends to Nike, which features the athlete in one of their ads with the tagline, “Believe in something, even if it means sacrificing everything.”