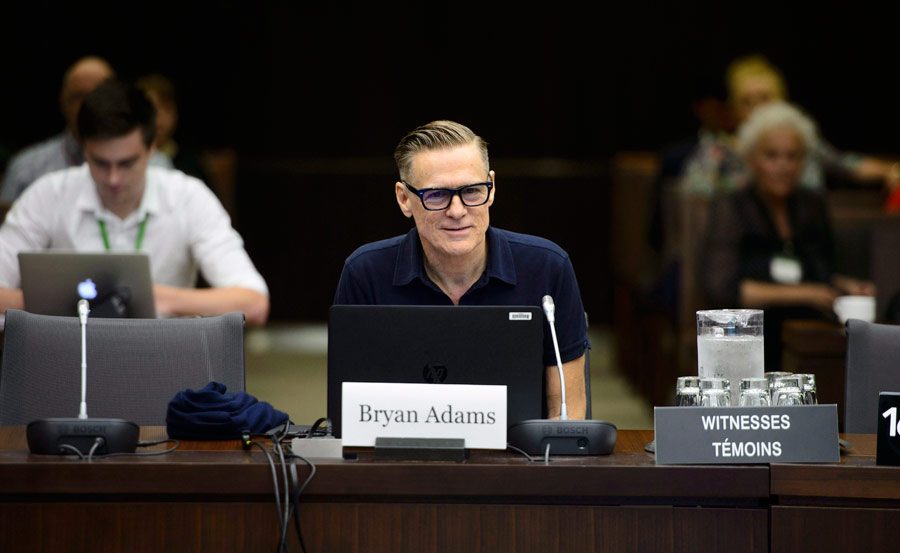 Bryan Adams appears as a witness at a Standing Committee on Canadian Heritage in Ottawa on Sept. 18. Photo: Sean Kilpatrick/The Canadian Press.

Canuck rocker Bryan Adams made a pilgrimage to Parliament Hill in Ottawa on Monday in an effort to get the federal government to make a simple but ultimately profound amendment to the Copyright Act.

At issue is the fact that the current Canadian law says that the exclusive rights to an artist’s work only revert back to the artist from the music label, publisher or other company that owns them 25 years after the artist is already dead — when they’re hardly of use. Adams’ amendment would see the law change so that the rights revert back to the artist 25 years after the label or company bought them, allowing the artists to profit from the work or use it in new ways.

“The message is we want to try and change one word in the Copyright Act from ’25 years after death’ to ’25 years after assignment,’” Adams said in a media scrum outside of the House of Commons, where he addressed the issue before the heritage committee.

As noted by the CBC, a mandatory review of the Copyright Act means that the heritage committee is taking arguments and input from artists and professionals across the country.

“I think Canada shouldn’t be dragging behind America. We should be in the forefront of what is happening with artists’ rights,” Adams added, referring to American law that returns the rights to artists 35 years after assignment. “We’ve got a lot of great talent in this country and we should be protecting it, nurturing it. And especially going forward it’s important that the artist’s have as much control as possible.”

The 58-year-old Grammy winner also noted that he’s taking this fight to Ottawa not for himself, but so that the next generation of Canadian artists can enjoy a financially sustainable career.

“I’m coming here after having a career of 40 years. I’m not really fighting for myself as much as I’m fighting for people going forward because this is something that will affect young artists. Especially now that the paradigm is changing so much with the internet, it’s hard to say whether an artist will have a career as long as this. I was lucky.”

Adams also posted a photo from his trip on social media in which he’s standing before the war memorial, noting that the Ottawa sojourn allowed time for a little sightseeing.