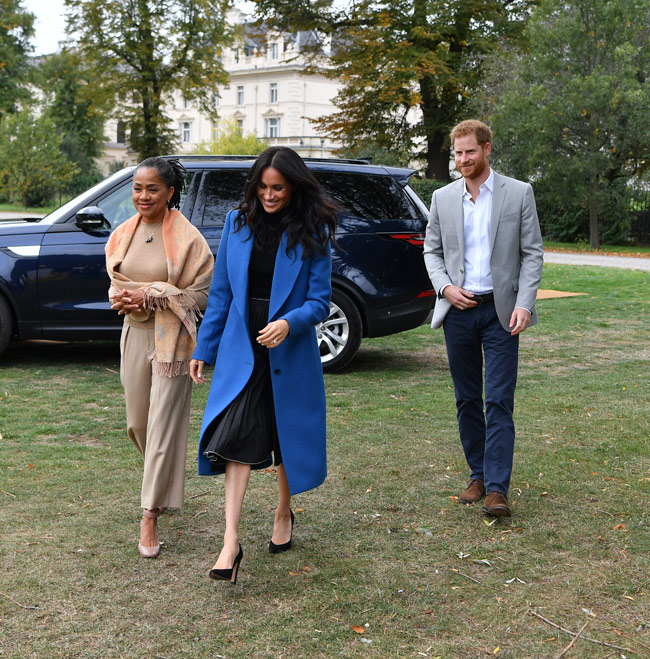 There’s no denying that Meghan Markle has seamlessly taken to her new role as the Duchess of Sussex. I mean, not even her never-ending family drama currently being played out in the tabloids (we’re looking at you, Thomas and Samantha Markle) can deter the duchess from her new royal duties.

On Thursday, the former actress, 37, hosted her first palace luncheon in honour of a charity cookbook she helped create.

Accompanied by Prince Harry, 34, and her mom, Doria Ragland (who flew in from Los Angeles for the occasion), the Kensington Palace celebration marked the publication of Together: Our Community Cookbook (available in Canada on Sept. 25).

Meghan, looking radiant as always, joined the women from the Hubb Community Kitchen and helped cook a meal of coconut chicken curry, aubergine masala and chapatis on the grounds of the royal couple’s palace home.

Earlier this week, the Royal Foundation — which runs the charities of Meghan, Prince Harry, Prince William and the Duchess of Cambridge — released a short film which showed Meghan playing an active role in the Hubb Community Kitchen, which is run by a group of women who lost their homes after the devastating Grenfell Tower fire in June 2017.

In a speech to her honoured guests, the duchess said the project had been a “tremendous labour of love … Your warmth and your kindness, and also to be in this city and see in this one small room how multicultural it was … I felt, on a personal level, so proud to live in a city that can have so much diversity. That there are 12 countries represented in this one small room, is pretty outstanding.”

Following the speech, Meghan, Harry and Doria sat down with the women and their guests, including those from the local community, the Al Manaar Muslim Cultural Heritage Centre and representatives from the book’s publishers, to enjoy the feast beneath a beautifully decorated tent.

The duchess first found inspiration for the cookbook during a visit to the Al Manaar Muslim Cultural Heritage Centre in west London, which she first visited (under the radar and out of the glare of the paparazzi’s lens) last January. During her frequent secret visits, Meghan watched as the women came together to cook food to feed families displaced by the Grenfell Tower fire that killed more than 70 people.

However, due to lack of funding, the women were only able to keep the facility open for two days a week. All proceeds raised through the purchase of the Together cookbook will help ensure the kitchen stays open seven days a week — thus ensuring full tummies and more laughter.

The duchess even wrote the forward for the book, saying the Hubb (which means love in Arabic) “is a place for women to laugh, grieve, cry and cook together. Melding cultural identities under a shared roof … creates a space to feel a sense of normalcy — in its simplest form, the universal need to connect, nurture, and commune through food, through crisis or joy — something we can all relate to.”

Ever since she announced her engagement to Prince Harry last November, the duchess has displayed a seemingly effortless grace under pressure — no small feat considering the eyes of the world are upon her. No doubt she comes by it honestly through her mother, Doria, who won herself a legion of fans during the Royal Wedding in May.

“Meghan draws a lot of strength from her mother. Doria is classy, chic and confident, but not unapproachable,” the duchess’s longtime friend and makeup artist Daniel Martin told PEOPLE. “I definitely feel Meghan gets a lot of that from her mother.”

Watch the short film for the cookbook here.