11 Popular Toys We Were Obsessed With As Kids 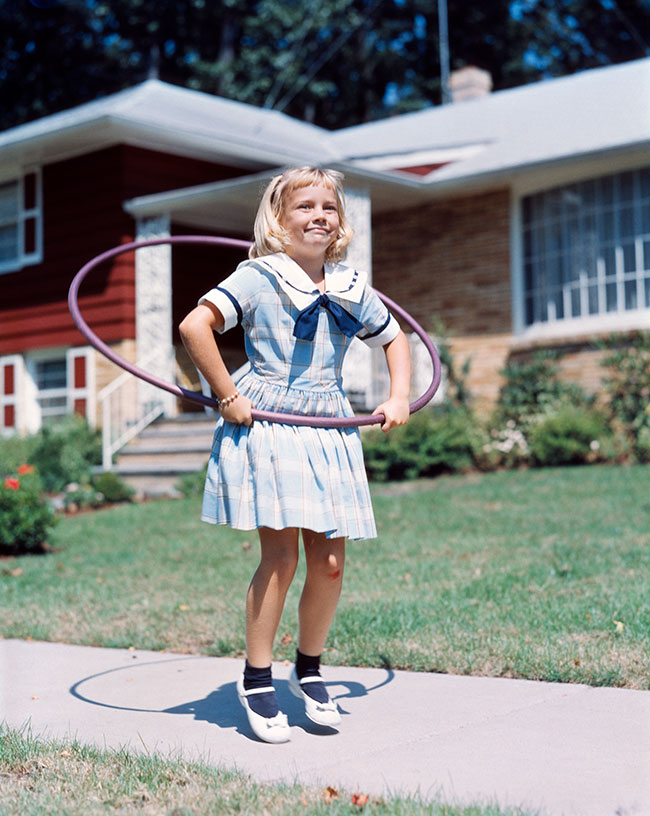 We're taking a look back at some of our favourite classic toys, including the Hula Hoop, which took the toy world by storm in the 1950s. Photo: H. Armstrong Roberts/ClassicStock/Getty Images

The holiday season has us reminiscing about those nostalgic Christmas mornings. And while the latest tech and video games have become the coveted items under the tree these days, some of our classic toys have endured — from Barbie and G.I. Joe to Little People and Mr. Potato Head.

Here, we take a nostalgic trip back to our youth with a look at some of the most popular toys (complete with original commercials!) of the 50s, 60s and 70s.

From her smooth hair to her moveable limbs and random catchphrases, this popular doll sure lived up to her name. Manufactured by the Mattel toy company between 1959 and 1965, the Chatty Cathy Doll was the second-most popular doll of the decade behind Barbie and said up to 11 different phrases with a pull of the “Chatty Ring” on the back. With her short blonde hair and blue eyes, later versions of Cathy embraced more diversity, featuring red hair, brown hair and an African-American edition. Voice actress June Foray (famous for her role as Rocket “Rocky” J. Squirrel in the Bullwinkle TV series) also recorded the phrases that accompanied the 1960s version of Chatty Cathy.

Did You Know? The Canadian edition of the dolls (produced by Mattel Canada) had a few notable differences from its American counterpart: The vinyl used on the Canadian doll had an overall glossier look, the eyebrows were placed higher on its forehead and a different type of plastic eye was used. As a result, the prices for the Canadian Chattys tend to be more expensive among collectors.

Growing up, there were few things more exciting than a bright yellow box containing the latest model of Dinky Toys. Made in England between 1934 and 1979, the die-cast Mazak zinc alloy miniature vehicles were produced by Meccano Ltd. Dinky Toys predated other popular mini cars like Corgi, Matchbox and Mattel’s Hot Wheels.

Did You Know? Production of the car models was halted during the Second World War (1941-1945) when the Meccano factory was commandeered by invading Germans and used in the Nazi war effort.

Although first introduced in 1939 by pharmacist (and photo-finishing business owner) Edwin Eugene Mayer, the View-Master really took off as a must-have toy in the 1960s and 1970s. Was there anything more exciting than glimpses of your favourite cartoon characters in glorious Stereoscopic vision? The thin cardboard “reels” containing seven 3D images simulated binocular depth perception.

Did You Know? There have been 25 models and more than 1.5 billion copies of reels produced since the toys inception.

Toy land’s first working toy oven was an instant classic. Introduced by Kenner Products in 1963, the original model used incandescent lightbulbs as a heat source, while current versions (manufactured by Hasbro Inc.) use a true heating element. The original turquoise range-style oven allowed kids to bake their own mini cakes with the heat emanating from a 60-watt lightbulb. Kenner sold more than 500,000 Easy-Bake Ovens in its first year of production. By the mid-1990s, more than 23 million Easy-Bake Ovens had been sold.

Did You Know? In 1962, Kenner Products created the Gooney Bird, which went on to be incorporated as the company’s logo. In 1968, Kenner approached The Muppet Show creator Jim Henson to create a Muppet version of the Gooney Bird. It was an ingenious move as the bird appeared in Easy-Bake Oven commercials, and became so popular that Henson later refurbished the character as Little Bird—Big Bird’s smaller counterpart on Sesame Street.

The all-American hero is more like an international man of mystery: G.I. Joe has undergone dozens of incarnations through the years—from soldier to sailor to pilot to astronaut, even to superhero. Hasbro Inc. first introduced the original action figure in 1964 during a time when the vast majority of parents balked at the thought of boys playing with dolls—even when said doll was an 11.5 inch soldier known as “America’s Moveable Fighting Man.”

Did You Know? The name G.I. Joe was nabbed from The Story of G.I. Joe, a 1945 movie about an American army unit in the Second World War. The toy was also partly inspired by the 1963 TV show, The Lieutenant.

Take him apart and put him together! This 9-inch spud was the brainchild of inventor George Lerner who released the three-dimensional plastic face in 1949. Originally, Lerner sold the toy to a cereal company that planned to use the plastic pieces—mouth, eyes, ears, nose—as prizes in cereal boxes. But the spud-head wasn’t a commercial success until Hasbro bought the rights from Lerner. In the following years, the Mister was joined by a Mrs. Potato Head and the couple made a splash in the Disney-Pixar Toy Story trilogy.

Did You Know? In 1952, Mr. Potato Head became the first toy ever advertised on television.

In the mid-1950s, French electrician André Cassagnes envisioned a mechanical drawing toy complete with a joystick, glass screen and aluminum powder. Originally called the Magic Screen, Etch A Sketch became a commercial hit in 1960 when it was purchased and mass-produced by The Ohio Art Co. It’s simple concept, with twin dials and an erasable screen, allowed kids to sketch and remove their creations with a shake. In 1998, it was inducted into the Toy Hall of Fame in Rochester, New York.

Did You Know? Etch a Sketch is currently owned by the Toronto-based toy company, Spin Master.

The lumpy substance known as Play-Doh began not as a beloved children’s toy, but as wallpaper cleaner. Yes, really! Joe McVicker of Kutol Chemicals in Cincinnati discovered the non-toxic product. By 1955 he’d recommended its use to his sister-in-law, a teacher who’d frequently complained about her students’ struggles to mold shapes with clay. McVicker and his brother, Noah, formed Rainbow Crafts Co. the following year and began producing 1.5-pound cans of the reusable modeling compound. Since then, more than 2 billions cans of Play-Doh have been sold (with current manufacturer Hasbro) in a variety of colours.

Did You Know? In the mid-1950s, Play-Doh packaging was illustrated with kids, only to be replaced by an elf mascot. That character was short-lived when, in 1960, Play-Doh Pete — a smock and beret-wearing boy — became the face of the brand of pliable putty. In 2002, Play-Doh Pete’s iconic beret was replaced with a baseball cap.

It can be twirled around the waist, limbs or neck—and it took the toy world by storm in the late-1950s. The modern hula hoop was invented in 1958 by Arthur K. “Spud” Melin and Richard Knerr, however kids and adults have used them throughout history. Traditional hoops were made from willow, rattan (a flexible and strong vine), grapevines and stiff grasses. Today, they are usually made of plastic.

The world record for hula hooping was set by fitness enthusiast Jenny Doan of Chicago, who kept her hoop spinning for 100 hours while raising money for Mental Health America in July 2020.

The previous record of 74 hours and 54 minutes was held by Aaron Hibbs of Columbus, Ohio.

Arguably the world’s most famous (and controversial) doll, Barbie was first introduced in 1959 by Ruth Handler, one of the founders of toy manufacturer Mattel Inc. Handler was inspired to create the iconic fashionista doll after noticing her daughter, Barbara, would dress her paper dolls in cutout clothing. Barbie debuted at the American International Toy Fair in New York City and cost $3 to buy. Barbie’s boyfriend, Ken, was introduced in 1961.

Did You Know?: During a trip to Europe in 1956, Handler came across a German doll called Bild Lilli. The adult-figured toy was exactly what Handler had envisioned for her own doll, and she purchased three of them to take back home to America. The Lilli doll was loosely based on a comic strip character drawn by Reinhard Beuthin for the newspaper Bild.

Did You Know? Little People have gone through six major body configurations. In 1961, the figures were produced with wood while plastic was used for their vehicles and buildings. By 1965, the Little People consisted of a small cylindrical base with a wider cylinder shape for boys and a conical upper shape for the girls. That same year, the bottom portions of the bodies were indented to allow for placement in the corresponding holes in cars and furniture.